President Glenn Burris Jr., General Supervisor Tammy Dunahoo and the board of directors are pleased to announce that Bill Chaney has been appointed to the role of district supervisor of the Central Pacific District.

Current Supervisor Ron Pinkston is in the midst of a transition that will be complete Jan. 1, when Bill Chaney—senior pastor of Valley Christian Center (Fresno First Foursquare Church) in Fresno, Calif., and chairperson of The Foursquare Church’s board of directors—officially takes office. An installation service will be held Jan. 21.

Since February 2010, Bill has led the Fresno church through a revitalization phase that saw attendance grow by nearly 40 percent. He hopes to bring similar energy to the Central Pacific District.

“It’s the difference between adding and multiplying,” Bill says of his new role. “I can affect one life a day here or help 170 churches multiply. We’ve had success, so we know how to help other people be successful. And, it’s a calling. I feel called to it.”

Tammy Dunahoo has seen God’s grace throughout the appointment process. She expresses Foursquare’s appreciation for the preparedness and unity Ron and Susan Pinkston brought to the Central Pacific District the past seven years.

“The district is poised and ready for multiplication,” Tammy affirms. “We believe Bill and Beth Chaney have been appointed by the Holy Spirit to lead in this next season. They have the gifts and experience to serve, but most of all have the call and heart to love and lead into the future.”

Although leaving as supervisor, Ron will remain active in the Central Pacific District with a yet-to-be determined title. His leading responsibility will be hosting pastoral couples retreats at the home he and Susan recently purchased on Mount Shasta.

Starting in January, the Pinkstons will host Sunday-night-to-Wednesday-morning retreats for one couple at a time. Approximately 50 couples have already expressed interest in visiting northern California. Their only costs will be for travel and food during their stay.

“I know Bill well; he’s the person I recommended to Tammy,” Ron says. “I’m thrilled that he got it. He’s a gifted administrator, as well as a pastor and leader. I’m excited about where he will take the district.”

Bill brings 38 years of ministry experience to the position, including the turnaround at Valley Christian Center. In addition to attendance increasing, the church has started several new campuses and churches in the past seven years.

His successes include launching Valley Dream Center in 2014. While they obtained permission from the Los Angeles Dream Center to use the name, the Fresno nonprofit has been a much leaner operation. The only full-time employee is the director. Congregational members and other volunteers help offer literacy classes, job training, financial education and many other services. Among them are a food bank and a Celebrate Recovery support group.

“We partner with other organizations and people around the city who are good at certain things,” Bill explains. “We became a clearinghouse where we could coordinate empowering projects on our campus. God has given us a mindset where it’s all about collaborating with the community.”

The new supervisor hopes to use the Dream Center model to start new churches in the district, saying holding Sunday services at a community center is a natural development in outreach to residents. He also hopes to connect churches that have adequate resources with struggling congregations to arrange mentoring relationships and provide financial help and other assistance. In some cases, he says, that might be “adoption”—where if a pastor leaves, the congregation can become a satellite location of the resource church.

“That’s what we did with our Susanville campus,” Bill says. “They were down to a handful of people, and the pastor was retiring. We sent our worship arts pastor to lead it. They were down to 20, and last Sunday had 91. That happened in a little over a year.” 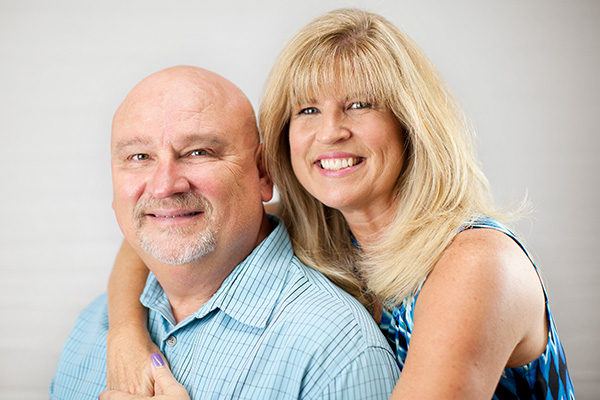 Bill and his wife, Beth

Despite the demands of his forthcoming role, Bill plans to continue taking a weekly Sabbath so he and Beth can ride their Harley, play some golf and visit their 18-month-old grandson.

“I got to see him the other day; when he reaches up with those arms and says, ‘Papaw,’ there’s nothing like it,” says Bill with a chuckle.

While Ron will miss daily contact with pastors, he is looking toward having fewer administrative duties and more of a pastoral role.

“We have a fair amount of respect for pastors,” Ron says. “We could only spend two or three hours with most pastors before, so this will be an expansion of what we were doing before without all the administration.”