Tyson Lambertson may not have quite ripped up the church growth handbook, but he has rewritten it extensively—as he’s seeing Foursquare flourish in the wide open spaces of America’s Great Plains. 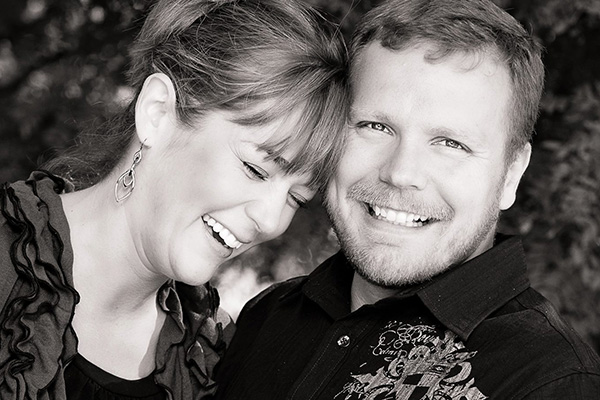 Tyson and Tami Lambertson have revitalized and multiplied churches across Nebraska.

The lead pastor of three of just a dozen Foursquare congregations scattered across the whole of Nebraska, Tyson has overseen a notable church transformation in the past decade that is the result of having a firm grip with one hand, and an open palm with the other. A self-confessed “big systems guy,” Tyson has adapted leadership and church growth principles he has studied to fit rural America, which he well understands, having himself grown up in a small town.

“You have to contextualize to the culture,” he explains. “You can’t take a cookie-cutter approach. You have to understand your people, culture and mission, and sync them together for a sustainable ministry model.”

He has done that successfully since moving to Scottsbluff in 2006 with his wife, Tami, to revitalize a Foursquare church that had closed six months earlier, leaving some bad feelings in the local community. From early days when the church comprised the Lambertson family and a couple in their 70s who had been part of the former congregation, weekly attendance at The Rock (Scottsbluff Central Foursquare Church) in Scottsbluff, Neb., has grown steadily to more than 500.

Earlier this year, The Rock launched two satellite churches, one meeting in the civic center in nearby Gering, the other about three hours away in North Platte, where they adopted The Lighthouse (North Platte Foursquare Church) and acquired its property. Total attendance across all three sites runs around 700.

Central administration is handled from Scottsbluff, but each campus has its own lead and children’s pastors. Rather than live-streaming his preaching, Tyson has the other pastors deliver their own messages, following an agreed teaching plan and outline. That’s one of the ways he has adapted to the local needs.

“Rural people want more of a touch, more hands-on than being disconnected,” he observes. “And we wanted to flag that our whole goal is to develop leaders. There are so many communities out here that need a vital, healthy, Pentecostal church, and we feel it is our role to raise up, equip and send out leaders.”

All of the 14 staff members have been hired from within the church.

“I’m a huge believer that God sends you everyone you need,” says Tyson, who mentors potential leaders by inviting them to shadow him in his daily ministry and then giving them room to develop. “My job is to disperse leadership. I keep an eye on things, but I don’t want to be a control freak; but I am not afraid to jump in when I need to.” 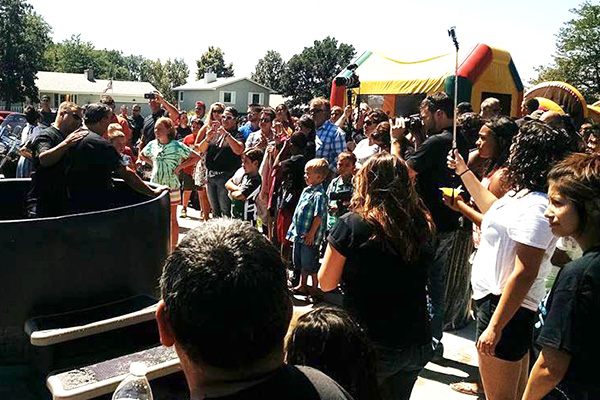 Health and healing can spread through a region. Here, baptisms are held after service on the church’s Biker Sunday.

The Rock has eight detailed systems in place covering everything from children’s ministry to stewardship, each constantly being reviewed and updated. But the trick is to balance that strategic planning with sensitivity to the Holy Spirit.

“We believe that God speaks to us during the planning and preparation phase, giving us direction for the church months in advance. This allows us to execute our weekend services with excellence, honing in on His Word for us as a body,” Tyson explains. “However, we also recognize that He can choose to move in a different direction at any time. Our pastors are given freedom to rearrange the services in that moment, and encouraged to be sensitive to the leading of the Spirit every time we are gathered.”

Tyson attributes part of the reason for The Rock’s growth to its intentional outward focus, captured in the mission statement, “To pursue, influence and multiply,” and the informal tag-line, “One more.”

Another significant factor in the church’s health has been embracing the BLESS strategy advocated by Chicago pastor and church-planting expert Dave Ferguson: (1) Begin in prayer; (2) Listen to someone; (3) Eat with them; (4) Serve somebody; and (5) Share with them. The approach has helped crystallize a lot of what The Rock was already doing. For example, Tyson has lunch almost every day with someone from the church or the wider community, to get to know people better. 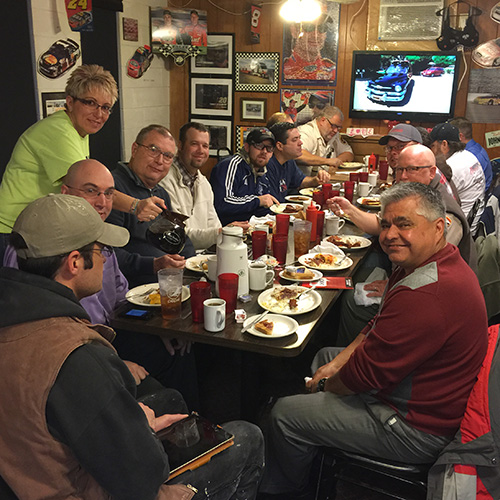 Tyson takes time to eat with people in his community, listen and share. Here, they are meeting for “Bibles and Bacon.”

Rural church growth is all about “a long obedience in the same direction,” says Tyson. “Not being flaky, being consistent.” And when you are a fairly large church in a small community—Scottsbluff numbers around 15,000—you are under constant scrutiny “from the vehicle you drive to what you do at Walmart.”

Given the strong family and relational ties in the area, credibility is hard-won and easily lost. “It’s the anchor,” Tyson asserts. “You just really have to be careful, and be very relational in your approach.”

Having followed the Scottsbluff turnaround, Gateway District Supervisor Sam Rockwell believes that Tyson and The Rock are “a good example of how health spreads in a region.”

The church in North Platte “is being revitalized through a partnership that involves sharing staff, resources, marketing and, most important, a value system,” Sam shares. “Sometimes, instead of assigning a church a new pastor, we encourage a healthy church to breathe new life into a church that is struggling. Tyson is leading the way in this strategy. The question we are trying to answer is: How can strong churches influence and support churches in a region?”