Thanks to generous donations made to Foursquare Disaster Relief (FDR) by Foursquare churches and members, survivors of two major earthquakes that ravaged Nepal this spring are receiving critical aid in times of desperate need. 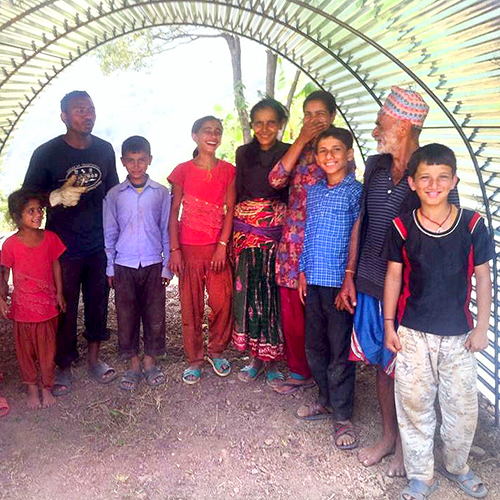 Funds donated by U.S. Foursquare churches are helping provide shelters to those affected by devastating earthquakes in Nepal.

After the immediate need for medical assistance eased, during which FDR helped fund surgeries direly needed, the focus has now shifted to helping people begin the challenging task of literally rebuilding their lives. With support from FDR, Foursquare churches in the country are providing shelters for families whose homes collapsed in the major 7.8 magnitude earthquake that rocked the country on April 25, the devastation of which was furthered by another massive temblor just two weeks later.

Foursquare has pledged to provide 300 semi-permanent shelters for families in villages outside Kathmandu, the country’s capital. Costing around $150 each, the Quonset huts are semi-permanent shelters that offer better protection than the tarpaulins under which many people have sought shelter—crucial as monsoon season begins. In due time, recipients even will be able to use the shelter materials in rebuilding their damaged homes or constructing new ones.

“The rains and winds have already started, and these shelters are holding up well,” reports Chad Isenhart, FDR international operations chief. “They offer a much better situation than what has been available.”

The shelters take about a half-day to erect, with Foursquare teams working alongside recipient families, who can close off the sides of the huts once they have been put up. One challenge has been getting the materials out to the affected areas; roads are damaged, so four-wheel vehicles are needed to gain access.

The emphasis is on meeting physical needs, though the project has also given Foursquare representatives the opportunity to start building relationships with residents in communities that previously might have been closed to Christian visitors.

“Our people are being very sensitive,” says Chad. “They are being slow and careful, hoping that people will start asking questions.” That has already started to happen. A couple of people in one of the villages have come to Christ through the witness of Foursquare help, adds Chad.

Meanwhile, some assistance work continues in Kathmandu, where Foursquare church members and workers have been serving alongside other volunteers, establishing relationships with people brought to the capital for medical treatment, volunteering at overwhelmed hospitals, helping care for patients and even providing somewhere for them to stay when they are discharged.

Chad urges Foursquare pastors, leaders and members to pray that ministry efforts in Nepal would lead to more opportunities to share the gospel in due course. He also requests prayer for the Foursquare members who have been working so hard for so long.

“They are getting tired,” he explains, “but they are also energized by what they have been able to achieve. They know this is a real opportunity to minister God’s love to a lot of people.”

Foursquare leaders in the country have also seen God’s hand in events prior to the earthquake, Chad says. Just a few months ago, many of the church’s predominantly young-adult members had taken part in preparatory training based on the book Doing What Jesus Did: Ministering the Power of the Holy Spirit by Ordained Foursquare Evangelists John and Sonja Decker.

“They were aware of the divine timing in all of that,” Chad notes. “They really felt that it had prepared them to be able to maximize the moment and the opportunity.”

Though the immediate crisis is over, long-term needs continue, and “our hopes would be to help build actual long-term homes, if finances permit,” Chad shares.

Donations already made and those to come are much appreciated. As the Foursquare family celebrates the progress being made in Nepal, continued prayer and financial help are still needed.