Life Pacific College (LPC), the launch pad for much of Foursquare’s ministry for almost a century, is readying for university status to better position it to prepare graduates for Spirit-led service everywhere from the church to the marketplace.

While maintaining its Pentecostal and Foursquare foundations, Life Pacific University, as the San Dimas, Calif., institution will be known beginning July 2019, will be home to a School of Arts & Sciences as well as a School of Theology & Ministry, with a growing number of degree and major options.

Since it was founded by Aimee Semple McPherson in 1923, LPC (then called L.I.F.E. Bible College) has sent more than 27,000 two- and four-year graduates into ministry in almost 150 countries. Currently, 700 students are enrolled, around a third of them in nontraditional and distance learning programs designed to help further develop those already active in ministry.

Becoming a university allows LPC to restructure to continue to expand its educational offerings, and is expected to broaden its appeal to more prospective students. At the same time that it adds new areas of emphasis, LPC will retain its spiritual focus, with a continuing priority given to Bible and theological education, and the spiritual development of students.

Announced at Foursquare Connection 2017 in Washington, D.C., in May, LPC’s transition is “much more than a name change,” notes President Jim J. Adams.

“Our transition represents a remarkable milestone in our journey as an institution of biblical higher education now nearing 100 years serving The Foursquare Church,” he says. “I deeply believe our highly focused mission toward the transformational development of students into leaders prepared to serve God in the church, the workplace and the world will be well served by the structural changes attendant to university status.”

Since its beginning, The Foursquare Church has been committed to raising up growing, educated leaders. But as times change, so do educational needs. Here we take a look at the different ways Foursquare has equipped ministers and leaders through the years. 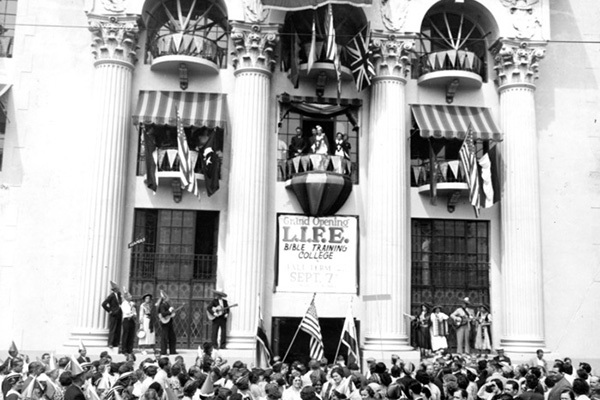 In the midst of the JESUS MOVEMENT, The Foursquare Church eliminates the requirement to attend L.I.F.E. in order to be credentialed. Roy Hicks Jr. formalizes INSTITUTES to further emphasize local church discipleship. District licenses begin.

LEADERSHIP ENRICHMENT AND DEVELOPMENT (LEAD) launches under the oversight of Jim Hayford, then Dan Stewart, bringing quality leadership training around the country in seminars attended by credentialed ministers during this time.

EMERGING LEADER NETWORK (ELN) is formed to give students out
of high school practical ministry experience. In this network of schools of ministry across the U.S., students are immersed 24/7 in discipleship, ministry training and outreach efforts.

MISSIONAL OBJECTIVES are established with an emphasis on leadership development, church and congregation multiplication, and church transformation. Leadership Education and Training is then formalized under the direction of Lisa Penberthy in 2017.

CANVAS, an online learning platform, launches so that Foursquare credentialed ministers and lay leaders can access training from anywhere. The platform started with core classes on Foursquare polity, church planting and the Bible. Now all 11 Foursquare districts host education. In the past 12 months, 54 courses were offered, which were taken by 892 pastors and leaders.