Whether it was teaching school in Wisconsin, or being a 30-year-old single woman driving alone across the country in 1940, I have never been afraid of anything.

But when I heard Aimee Semple McPherson preach about my need for a Savior, I sat up and took notice. My first time attending a service at Angelus Temple, the place was so packed with people I had to sit on the steps in the third balcony. Before the service was over, I made my way to the altar to give my heart and life to Christ.

Not long after, Sister McPherson told me I needed to serve the church in some capacity. I worked full time for the Los Angeles County Board of Education, and the schedule wouldn’t allow me to visit the sick. I couldn’t sing in the choir or play in the Silver Band. But I knew I could pray.

So I volunteered for a two-hour shift every day for one year in the Angelus Temple Prayer Tower. People would mail in prayer requests or drop them in the offering, and often the telephone in the Prayer Tower would ring with an urgent prayer need. Volunteers prayed over those requests 24 hours a day, seven days a week.

I also discovered that I could serve as an orderly/usher during Sunday services in the temple and still benefit from being in the service and hearing Sister McPherson’s messages. It was an honor for me to serve in that role in the first balcony of Angelus Temple for 23 years. 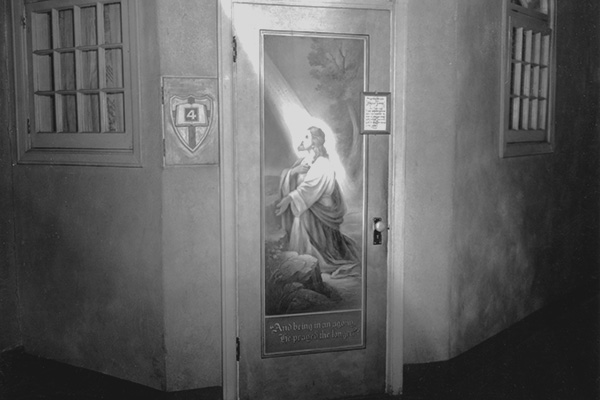 In December 1941, I had been in Los Angeles for one year and was still a fairly new Christian. I’ll never forget the Sunday morning when Pearl Harbor was bombed. Sunday services at Angelus Temple were underway when someone handed Sister McPherson a note about what had happened. Immediately, she called the church to prayer. She told everyone to get on our knees, and cry out to God for our nation and our world.

On several occasions, I saw Sister McPherson honor military personnel who were in the services. In some cases, she requested them to come on the platform so she could pray for each one.

I saw her give soldiers New Testaments, and if a soldier had a girlfriend with him, Sister McPherson would give him a rose from her bouquet to give to his girlfriend.

Sister McPherson would give her last dollar if it would bless someone in need. She was so generous and giving, always blessing others and giving away her own life so others could be saved.

I was at work in 1944 when word reached me that Sister McPherson had died. Mourners and dignitaries filed past her open casket for days, hoping to pay their final respects.

Preaching the gospel for the salvation of souls was the most important thing in life for Sister McPherson. She instilled in my heart the passion to do something for the kingdom of God. It was more than powerful preaching. Sister McPherson showed us all how to live our lives for the glory and purposes of God.

This article is adapted from a video interview with Elinore Sabin, recorded on March 26, 2004.

ShareTweetEmail
Elinore Sabin accepted Jesus after hearing Aimee Semple McPherson preach. She then served as an usher at Angelus Temple for 23 years.
Advertisement