Looking out on the sea of faces, I saw my college professors, family, friends and Aimee Semple McPherson. It was an intimidating yet supportive audience, and I was about to deliver a message to my fellow graduates at L.I.F.E. Bible College. It was January 1943, and I was 22 years old.

My knees knocked together, and I tightly gripped the pulpit that was the honored place for Sister McPherson when she preached. This was my turn to preach to her, along with 5,000 people at Angelus Temple and countless others listening on KFSG radio throughout California and beyond. No wonder I was nervous.

I worked my way through college as a switchboard operator for L.I.F.E. Bible College (now called Life Pacific College), answering the four incoming phone lines that connected the school with the outside world. Sister McPherson would sometimes call and leave a message for one of the faculty, but up to the time of my graduation, these brief phone calls were the only times I had personal conversation with her.

After I preached that night in Angelus Temple, Sister McPherson warmly embraced me. “Darling, you were wonderful,” she said. Then she added something that I have never forgotten: “Whatever you do, don’t ever leave me.”

It was a haunting statement but one that I have since come to understand. Sister McPherson was lonely and isolated from the people she loved and cared about. Rightly so, the leadership of her ministry felt a need to protect her from those who would take advantage of her, threaten her and her children with physical harm, and discredit her reputation. It had all happened before, and by isolating her from the general public, her team thought they would spare her from accusation and personal danger. 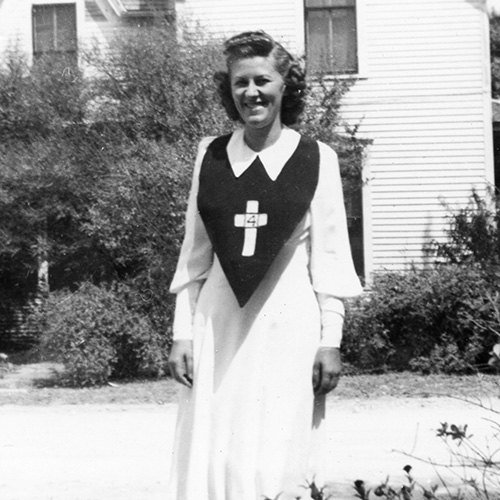 She also felt the loss of L.I.F.E. graduates and ministers who left Angelus Temple to start “branch churches” [now called new church plants] or to become missionaries overseas. As the ministry expanded, she felt she was losing some of her dearest friends and family. More than growing pains, she also felt like she had fewer people to trust. She was a public personality who had been taken advantage of before because of her constant availability to the masses.

Despite her forced reclusiveness, and maybe because of the isolation from the public, she maintained genuine concern for the people she ministered to and would spend countless hours praying for the sick, often long into the night following her services.

She started with the seriously ill—those brought in by ambulance stretchers—and spent time praying for the diseased and disabled, believing for their full recovery. On one occasion, she had been on her feet all day preaching and praying. She kicked off her white shoes and moved among the sick in her stocking feet until the very last person had received prayer.

When she gathered her belongings, she couldn’t find her shoes. Someone had taken them as a souvenir, and she made an appeal to the crowd as they filed out of Angelus Temple. “You are welcome to keep the shoes, but please return the $12 arch supports,” she said. Apparently, she had other shoes but didn’t have another pair of insoles.

I felt sorry for Sister McPherson, for the lonely life she led, but I also knew that God had a special calling on her. She mobilized people during natural disasters and literally kept the City of Los Angeles fed during the Great Depression. I heard the famous actor Anthony Quinn say several times that if it hadn’t been for Aimee Semple McPherson, his family would have starved to death during the Great Depression.

Sister McPherson told us Bible college students that getting people saved was the most important part of any ministry. Praying for the sick may attract the crowds, she would say, but salvation in Jesus Christ gives them eternal life.

She spent more time preaching a salvation message than she did praying for the sick; but on one occasion, she uncharacteristically ended her sermon early and began praying for the sick. “I felt a burning in my hands,” she told us. “My hands were burning up, and I had to stop right then and pray for the sick.” 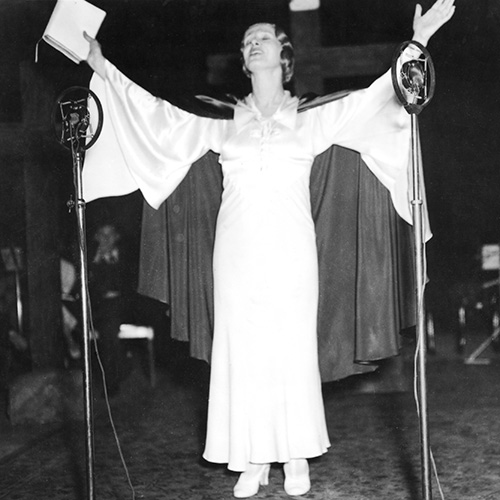 She was a firebrand for the Lord, but she used the appeal of the world to bring people to Christ. Many preachers of the day didn’t much like her because she painted her fingernails, cut her hair, and wore makeup and stylish hats. Still, an attractive woman preacher was a novelty, and Hollywood loved her progressive methods of preaching to the masses.

I remember her saying, “Love the people, become part of their lives, forget your own needs, and love the people to the Lord.” This was her focus and her mission. What she poured into my life so many years ago prepared me for 40 years of Christian service in ministry alongside my husband, Warren.

She always told people to keep their eyes on Jesus and not on her. We have kept our eyes on Jesus and kept true to the Foursquare Gospel that Sister McPherson preached. It is wonderful to reflect on so many lessons learned and so many miracles that attest to God’s blessing on our lives, and I’m thankful for the fullness of God’s Holy Spirit that has made it all possible.

ShareTweetEmail
Meta Twyford is a retired Foursquare pastor. For 40 years, she served in ministry with her husband, Warren, in California, Arkansas and Mississippi.
Advertisement