When Glenn Burris Jr. became interim president in 2009 and was elected a year later, The Foursquare Church was primed for a change. Many pastors wondered why they even needed to be part of a church network, and some in Foursquare began raising those concerns directly to Glenn. Though he had many obstacles to navigate, the church as a whole gratefully accepted Glenn’s leadership during that season.

Out of those realities, Reimagine Foursquare was born, and the 86-year-old denomination (now 97) started to make noticeable changes. Because of Glenn’s accessibility, including his prolific Facebook page, we experienced a leader who went far beyond the courtesies of typical executive leadership. When faced with tension, he took our calls, responded to our emails and flew out to our churches. “He broke the power-distance divide that haunts many organizations,” notes Ted Vail, vice president of global operations and director of Foursquare Missions International.

In 2013 Glenn, along with General Supervisor Tammy Dunahoo, visited each district in a series of Town Hall Meetings to learn what our pastors and leaders wanted Foursquare to become. Foursquare chaplains, missionaries and affinity groups were also integral to the conversations.

“Having the ability to spend several hours with our ministers in locations all across the country to listen deeply to their perspectives was worth every minute,” recalls Tammy. “It gave our eyes and hearts new clarity for prayer for them as well as better understanding of the needs we could meet and ideas for change we could enact. Glenn’s shepherd heart set the tone for each gathering, and we left feeling better connected and loving this Foursquare family all the more.”

“Glenn is someone who champions diversity and equality. Over the last 11 years during Glenn’s leadership, I have personally seen more change in Foursquare than what anyone could have ever anticipated.”
—Huey Hudson, chair of the board of directors

Reimagine Foursquare refocused our church to be about our Father’s business—growing healthy churches in innovative ways. More money was sent to churches for missional work in their communities. More churches were welcomed into the family thanks to property bylaw changes. And more churches were planted.

Welcome to the table 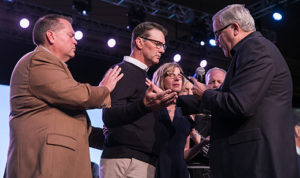 Change wasn’t just about policies and bylaws. Glenn made specific effort to welcome new voices to the table. Glenn’s first major appointment was the first-ever female general supervisor. This appointment wasn’t just a high-profile anomaly—the Foursquare board of directors, Foursquare cabinet and central office staff are filled with men and women, young and senior leaders, as well as those of diverse cultural backgrounds.

“Glenn is someone who champions diversity and equality,” says Huey Hudson, the chairman of the board of directors, who leads a diverse church in Alabama. “Over the last 11 years during Glenn’s leadership, I have personally seen more change in Foursquare than what anyone could have ever anticipated.”

Glenn hasn’t only stewarded sweeping change to The U.S. Foursquare Church. For the first time in nearly 25 years, Glenn brought the Foursquare Global Council together. In 2012, 225 leaders met in Phoenix and walked away with six Global Distinctives that outline what makes Foursquare unique, no matter the country or context. National leaders representing 65 countries and more than 8 million church members agreed to be on mission together.

Glenn has served 44 years as a credentialed minister, including 11 years as president and seven years as general supervisor. His legacy continues as he begins retirement on Sept. 1, 2020. He first brought the idea of electing a president a year early to the Foursquare Connection voting body in 2017. The bylaw was amended and voted on in 2018, and Randy Remington was elected as our next Foursquare president in 2019 to allow for a year of transition. Thanks to Glenn’s leadership, Foursquare was prepared with a new president before the COVID-19 pandemic forced the cancellation of Foursquare Connection 2020.

During the year of transition, Randy was able to shadow Glenn, and was quickly handed the reins. Glenn demonstrated that he both leads well, and releases well.

“Glenn gave great thought and care to the intentionality of this transition,” adds Randy. “As a result, there was clarity regarding the process and timeline. But most importantly, it was a prayerful process that kept Jesus at the center, our Foursquare family’s best interest at the forefront, and contended for the strengthening and deepening of our own friendship along the way.”

Foursquare moves into a new season with Randy Remington becoming the president of Foursquare as of Sept. 1, 2020. We celebrate God’s provision, the year of transition and for future change not yet realized. As the mantle of leadership rests on Randy’s shoulders, we pray for God’s wisdom over his life as he leads Foursquare into a new season. 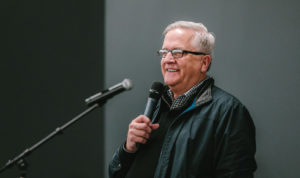 While it takes a team of people to make major transitions happen, Glenn Burris Jr. has steered the movement to lasting, meaningful change within The Foursquare Church. We celebrate just a few of those accomplishments here.

ShareTweetEmail
Marcia Graham is the content manager for The Foursquare Church in Los Angeles.
Advertisement