Relief supplies and prayer support are being rallied for Foursquare members and all those affected in Nepal who have been demonstrating remarkable faith and resilience in the wake of the massive earthquake that rocked the mountainous South Asian country. 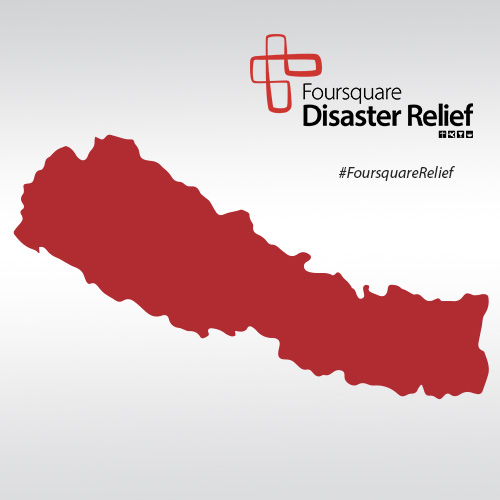 The death toll is expected to climb higher than the 5,200 so far confirmed lost, as recovery work continues, and there are fears of aid efforts being hampered by widespread damage to infrastructure. Yet Foursquare leaders there who oversee around 400 members in four churches and half-a-dozen meeting places have sent out a message of encouragement.

“While things are tough and are going to get worse, God is faithful and able,” one of the leaders said in an email message to leaders in the United States. “So don’t fret (Psalm 37:8), it only leads to harm. Rather, let’s rejoice in the privilege of partnering with God to serve a very lost people for His glory!”

Only one Foursquare national worker was injured in the 7.9 magnitude earthquake that hit the country April 25—the worst in decades. He sprained an ankle trying to jump out of a second-floor window. Meanwhile, some of those who escaped unhurt have been volunteering at hospitals where victims have been treated in the open-air for fear of aftershocks causing further collapses.

Foursquare Missions International‘s (FMI) area missionary to the region reports: “To my knowledge, Foursquare believers are safe, and their homes are intact, and they are actively reaching out to and serving their communities—including many in their communities who previously opposed and threatened them.”

With communication limited, Foursquare Disaster Relief (FDR) International Operations Chief Chad Isenhart is en route to Nepal to deliver some immediate supplies and assess long-term opportunities for helping Foursquare members there, assisting them as they reach out to others in the region.

In addition to raising FDR funds to send further supplies, he anticipates opportunities for short-term teams to go and help with relief efforts, as the situation becomes clearer. “The immediate need is for the essentials, such as food, water and shelter,” Chad notes.

Although the vast majority of Nepal’s 30 million people are Hindu, there is a small Christian community in the country. Foursquare’s presence dates back to the 1980s and has “experienced a resurgence of life and health in the past decade,” according to the area missionary.

Much of the work has been led by a Foursquare minister and his family, and is centered in the capital, Kathmandu. Their ministry includes a recording studio, church planting, leadership training, vocational training for at-risk women and two children’s homes. Additionally, a Nepali pastor leads a church, outreach programs and a boys’ home.

The Kathmandu leader reported in an email that Foursquare workers are “100 percent fine.” He told of being interrupted several times while writing his message by earthquake alarms installed on the upper floors of his house: “We are all sleeping on the floor downstairs near the front door. Twice tonight I woke up the family and had them poised by the front door, ready to run out in the rain if the shocks intensified. But thankfully we remain warm and dry, and I’m feeling a little guilty because of our team, who are cold and wet in a hospital parking lot.”

Hospitals were locking their gates to keep out new patients, or shutting down altogether, he reported. “Things are bad and are going to get naturally worse as quakes take their toll and resources dwindle over the next weeks,” he wrote. “There is no electricity, no water and no more fuel coming into Kathmandu from India, as the roads are now impassable.”

But he urged supporters not to worry. “Rejoice instead,” he said. “We are in the most capable hands of the perfect Father. And God’s kingdom is being multiplied into lives today.”

Giving thanks for support from other parts of the world, the leader wrote: “Your notes of affirmation, donations and prayer always serve to remind us that God has us covered very well by you as loving co-workers. He is good all the time! Now it’s time that we serve our neighbors by being the hands and feet of Jesus like never before.”

FMI’s area missionary appeals for Foursquare members around the world to pray for protection for those injured or still trapped, that the aftershocks would end, and for the unrestricted flow of relief help to those affected. Additionally, he calls for prayer for “the church to reach out in love to all those around them, and for vast numbers of people to come to know the Lord through this.”

Foursquare Foundation is backing FDR’s efforts by pledging up to $5,000 in matched donations toward FDR efforts in Nepal, through May 15.

Announcing the initiative, the foundation’s executive director, Joe Wainer, said: “We are more than willing for any individual or entity to accept this challenge to give and offer it to others in their areas of influence. Our ‘boots on the ground’ are overwhelmed with opportunity to share the love of Christ with many. So we challenge you to give beyond your planning for the year in faith, knowing that God will honor those who care for others in need.”

Editor’s Note: Thank you, Foursquare family, for your generous giving in this great time of need for Nepal. Your donations have allowed Foursquare Foundation to donate its full pledged total of $5,000. Even though this match challenge has been completed, our Foursquare family in Nepal is still in need of much more to bring rescue, relief and recovery through our Foursquare Disaster Relief team. Please continue to give to FDR, and as you do, invite friends and challenge fellow churches and members to give, too. Thank you for your partnership!