For Chris and Laura Dakas, the incarnation isn’t just a core doctrine, it’s the very heart of ministry—providing somewhere for mothers experiencing homelessness to bring their babies into the world, just as the Bethlehem innkeeper welcomed Mary and Joseph.

The Foursquare Missions International (FMI) missionaries have opened the doors of their ministry outpost in Thessaloniki, Greece, to some of the pregnant refugees fleeing conflict and persecution in the Middle East. Their caring outreach is part of Foursquare Disaster Relief‘s (FDR) Project Sanctuary, supporting ministry among some of the millions—many of them Muslims—of displaced people in the volatile region.

The temporary accommodation is being offered in rooms that Chris and Laura have used as a regional center for their work in Greece for the past several years, visiting from their home and headquarters in Tirana, the capital of neighboring Albania. Expectant moms are given a private room in a two-bedroom, furnished apartment with a private bathroom and a common area, and a kitchen shared by two women.

Sometimes the moms are accompanied by their husbands and other children, but not always. “It depends on their culture,” explains Chris. “A lot of the men don’t like to be in the same building as other pregnant women.”

The couple has quietly pioneered church planting and caring ministry projects in Albania and other parts of the Balkans for the past 25 years. A retired police officer with a Greek heritage shared by his wife, Chris first visited Albania in 1990. The couple returned the following year to begin a long-term work that has included establishing a restaurant, a bed and breakfast, a bookstore and a center for handicapped children.

Chris and Laura are members of TriLife Church (Worcester Foursquare Church) in Worcester, Mass. During their years in Albania, they have helped plant nine churches, and ministered throughout the region. “The Balkans are our baby,” Chris says. 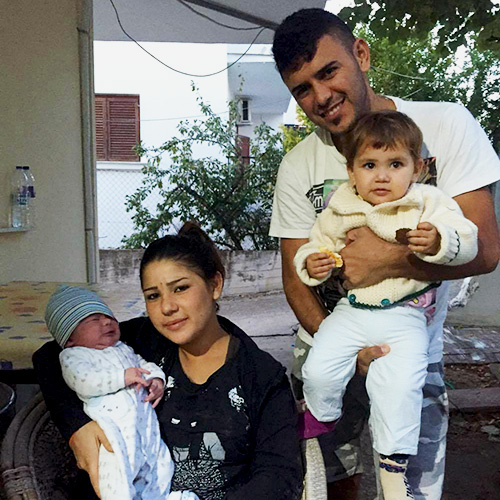 Providing shelter for pregnant women began earlier this year after the Dakases became aware of the needs in the refugee camps in the area. “They are living in tents without any kind of facilities—running water or even a bed,” states Chris. “They have to cook outside.”

Expectant moms are invited to the Dakases’ accommodation a month or so before they deliver, and then stay another month or so afterward. “Unfortunately, they have to go back to the camps then, but that’s the best we can do right now,” Chris notes.

With FDR funds helping pay the rent, the outreach that has helped around a dozen women so far “gives us an opportunity to be a role model of Christianity,” Chris affirms. “They see we will serve people regardless of faith, and that we are there for the long term.”

The Dakases’ effort is just the latest Project Sanctuary initiative: FDR has poured more than $200,000 into refugee ministry in the region during the past three years, much of it in Turkey, where Foursquare is the largest Protestant denomination.

FDR has partnered with the Dakases in another creative outreach: handing out micro SD cards. Using a generator and multiple outlets, the Dakases have provided cell phone charging stations for refugees at some of the Greek camps, offering the cards that hold Arabic Bible translations, the Jesus movie, testimonies from Arab converts, and children’s Christian cartoons.

Also funded in part by Foursquare Missions Press, the SD card distribution has reached around 6,000 people so far. “They receive them well,” says Chris, “and there have been some converts. Not a lot, but some; it has been a blessing.”

With no end in sight to the refugee crisis in Europe, there are still many open doors to the gospel through efforts such as those by the Dakases, notes Chad Isenhart, FDR international operations chief.

“The need is huge, but every small thing helps,” Chad says. “This is a real window of opportunity for the church, and we don’t want to miss it. We have a chance to show the love and compassion of Jesus to people.”

Chad appeals for financial support and prayer for the Dakases, and all Foursquare workers involved in the region—for their continued strength and also for safety, especially in the light of recent terrorist incidents in Turkey, where Foursquare is involved in several refugee projects.

For more information on how to support Project Sanctuary projects, including providing accommodation to pregnant mothers and outreach to refugee camps in Turkey, read this article by Foursquare President Glenn Burris Jr. and contact FDR.

How You Can Get Involved: