My mother had died, and my grieving father had lost his job. I was 5 years old, and my sister, Neva, was 6. Things didn’t look promising for two little girls who were soon to be orphans in Los Angeles during the Great Depression.

Food was scarce, and my father sent me each day to the Angelus Temple Commissary, where Aimee Semple McPherson and hundreds of volunteers fed thousands of people. They always seemed to have enough food, clothing and blankets so that everyone in need went home with something. My daily request at the Commissary was for a loaf of bread and a can of peas.

One night, as services were about to begin at Angelus Temple, I mingled with the 5,000 people flocking to their seats and quietly slipped into the highest balcony. I wanted to hear Sister McPherson preach but feared that the ushers might make me leave because I was too young to be there without an adult.

After Sister McPherson preached, she told everyone who wanted to accept Jesus Christ as Savior to make our way to the altar and confess our sins. She promised God would forgive us and that He would live inside us forever. That’s all I needed to hear.

I pressed my way through the crowds of people, dodging the legs of adults on every side, down three flights of stairs, until finally I was on the main floor. I still remember the shuffle of feet as hundreds, maybe thousands, of people crowded the altar, seeking God’s forgiveness and the same hope that I needed.

Imagine my concern when there was no place to kneel. The altar and the aisles were full, nearly to the backdoors. I left the crowds behind, climbed onto the platform and knelt beside a large chair that at the moment was quite empty. I was desperate for a place to pray and began to pour out my heart to God.

In retrospect, I realize that many people would have considered it inappropriate to kneel there—after all, I was praying beside the chair where Sister McPherson sat each time she waited to preach! But I was 5, and I needed God.

I was lifted from the floor as Sister McPherson took me in her arms. Her voice was kind, and the honesty in her eyes calmed my trembling heart. She began to speak directly to me. She told me that God had important plans for my life and that I would grow up to become a pastor’s wife and to serve in ministry as long as I lived.

Somehow, I knew Sister’s prophetic word was right and that God had a unique calling on my life, although I had no idea what miracles He would perform to make that calling come to pass.

“Sister McPherson took me in her arms. She told me that God had important plans for my life and that I would grow up to become a pastor’s wife and to serve in ministry as long as I lived.”

I had become friends with Mrs. Whilhite during my daily visits to the Commissary, where she volunteered. My father could not find work, and the dire circumstances took a toll on him. On Christmas Eve that year, he left Neva and me on the Whilhites’ front porch, and left town.

Mr. and Mrs. Whilhite found a place for us to sleep, and they stayed up all night making us Christmas presents so we would have something to open on Christmas morning. They made sure we grew up loving Jesus and serving people in Angelus Temple.

When I was old enough, I began taking classes at L.I.F.E. Bible College (today called Life Pacific College), where I graduated with honors. While a student there, I met my future husband and ministry partner, Allan Hamilton. After we married, Allan and I began our ministry in Prospect Valley, Colo., a tiny country town with six buildings. 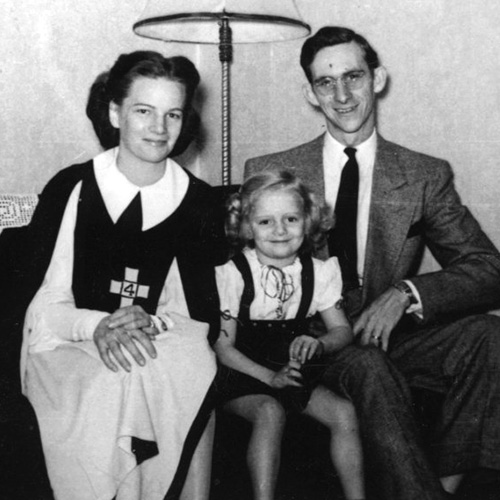 Dorothy Hamilton, left, with her husband, Allan, and their daughter.

Everybody in Prospect Valley lived one mile apart, and when we arrived, we didn’t know anyone. I was born in San Francisco and grew up in Los Angeles, and at first did not want to spend one minute in this little town. But God changed my heart and provided for us as we shared His love with the people. It was quite a time of faith-building for Allan and me.

God blessed us with our first daughter, Janice, in Colorado in 1943. The next year, He called us to the big city: Kansas City that is, followed by ministry assignments in Missouri and then Nebraska, where our second daughter, Kathryn, was born in 1952.

Soon after this, Allan and I loaded our belongings into a two-wheeled trailer and took to the road. At the time, our daughters were about the same age as I had been when Sister McPherson prophesied over my life. We evangelized throughout the Midwest and planted new Foursquare churches in the communities where we preached.

In 1957, we boarded the S.S. Harrison in San Francisco, a freighter bound for Manila. It was a 33-day trip, and when we stepped on dry land in the Philippines, we were grateful for God’s safety during our journey. We were amazed at the sunken ships and submarines that still dotted the harbor so many years after the end of WWII.

We served as Foursquare missionaries in the Philippines for four years; during that time, the number of Foursquare churches in the nation grew from 30 to well over 300.

Some years later, we assumed the pastorate of the Portland, Ore., Foursquare church and saw God do some tremendous things through the ministry. People’s lives were transformed, new facilities took shape to help reach the city, and international evangelists such as Kathryn Kuhlman, Nicky Cruz, Mario Murillo and others found a home from which to minister to thousands through the Portland Foursquare Church.

God has seen fit to use that ragged little girl who didn’t know at whose chair she was praying. Sister McPherson’s prophetic word was fulfilled in my life, and God deserves all the glory. God’s grace was also evident in my family, as I saw my father on several occasions before he passed away—God brought healing to our relationship, as He so faithfully does.

This article on the life of Dorothy Fern McKeever Hamilton (1922–1986) is adapted from an article by Gregg Bronsema and family notes.

ShareTweetEmail
Dorothy Hamilton (1922-1986) served as a Foursquare church planter, evangelist and pastor in the U.S. and a missionary to the Philippines.
Advertisement