While Foursquare Disaster Relief (FDR) first responders are ready for crisis situations anywhere in the world at almost a moment’s notice, their latest deployment has seen them offering care in their own backyard.

Several members of New Life Christian Center (Jackson Foursquare Church) in Sutter Creek, Calif., were among the nine-strong FDR team mobilized this past week to meet needs among the thousands of people forced to flee their homes because of wildfires. Smoke from the Butte Fire—that together with the Valley Fire claimed several lives and destroyed well over 1,000 homes in the past week—blanketed the surrounding area, not far from Sutter Creek, from where the FDR response team was coordinated at New Life.

Several members of the church who have completed disaster response training joined the Foursquare Disaster Response Task Force to visit emergency shelters in campgrounds, churches and other locations in Amador and Calaveras counties.

With relief agencies and local churches meeting the practical needs of those who had been displaced, the FDR team was free to concentrate on how people were coping emotionally. Readily identifiable in their red “FDR chaplain” tee shirts, the volunteers mingled with people at the different centers, hearing how they had been forced to evacuate and the fears and uncertainty of what may have happened to their homes.

Through one meeting, members of the FDR team were able to arrange for emergency care at a local dental office for a child with a broken tooth. And, in an unlikely encounter, one of the FDR volunteers led someone to Christ at the Jackson Rancheria Casino Resort, which was the main evacuation center in Amador County. Having prayed with a woman to receive Christ, the FDR team member spoke about baptism—and then made arrangements for the resort swimming pool to be opened so that the new believer could be baptized there and then.

In another meeting, the FDR volunteers were able to speak and pray with a man who had learned that his home had been destroyed, losing everything. “All he had left was what was in his truck,” says Patty. “He was a believer, and thanked God that he had gotten out when he did.”

One woman’s faith was restored when she discovered that her home had somehow been spared, while others around had been destroyed. The home had just been upgraded with facilities for the woman’s disabled daughter. Having previously felt distant from God because of all the struggles she faced, the woman, says Patty, told FDR volunteers: “This has made a believer out of me, that God is watching over us.” 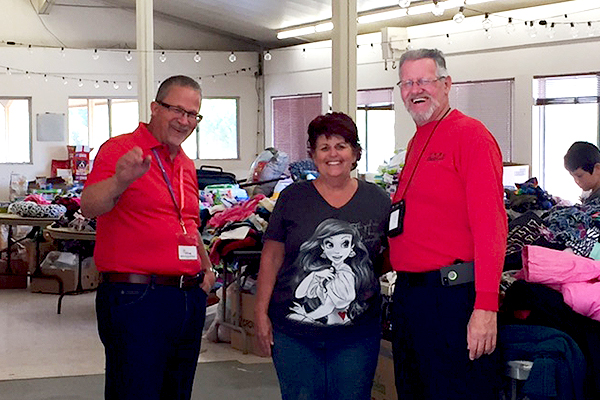 Returning to the evacuation centers each day, the FDR volunteers were able to renew contact with people they had spoken with previously and “build bridges,” Patty says. As people begin to return to their homes, following the midweek lifting of mandatory evacuation notices, there could be opportunities for follow-up ministry from members at New Life.

The church was able to play another small part in the response to the fires, providing the grounds of a currently unused property it owns in Pine Grove as a staging point for Pacific Gas and Electric Company crews working to restore power to the area.

While the FDR team ministered in the two counties affected by the Butte Fire, Patty’s husband, Jay—who in addition to co-pastoring New Life is U.S. director of FDR—drove to the area of the Valley Fire to see whether help might be needed there. Meanwhile, the first group of FDR responders was planning to visit some of the worst affected areas in Calaveras County as people returned home, to offer further support before themselves heading home.

The Butte deployment marked the first time being on an FDR emergency response team for Patty and several other members. “It has been very encouraging to see how what we have invested in training paid off in being able to help others,” she says. “It was good to be able to give comfort and show compassion, to plant those seeds.”

As midweek rain helped dampen some of the flames, aiding firefighters’ gradual containment of the fire, Patty believes it came in response “to a whole lot of prayers going up.”

This past week’s deployment marked the second time this month that the Donnellys have been involved in a fire emergency. The previous week, they had been at Foursquare Central Pacific District’s annual fall conference at Old Oak Ranch in the Sierra Nevada foothills of Sonora, when advancing flames threatened the 240-acre Foursquare camp and conference center.

The event had to be abandoned as attendees were evacuated. District Supervisor Ron Pinkston reports that Jay, a longtime member of the California Department of Forestry and Fire Protection (Cal Fire) before going into full-time ministry, had been “instrumental in the effectiveness” of the fire crews called to the scene.