Though once in danger of closing amid changing neighborhood dynamics, during the past decade Abundant Life (Mooresville South Foursquare Church) in Mooresville, N.C., has rebounded, thanks to neighborhood outreaches. This year, that included distributing backpacks of school supplies.

“We collected supplies and backpacks ‘Angel Tree’ style,” says David Giles, senior pastor of the church since Jan. 2013. “The Sunday we collected the supplies, we had 12 visitors from the neighborhood.” With 125 members in attendance on a given month, neighborhood outreaches have provided Abundant Life with renewed vigor and community focus.

“We believe deeply that we’re supposed to be a part of our community,” says Dan Hicks, assisting minister at The Church On The Way (Van Nuys Foursquare Church) in Van Nuys, Calif. “Getting involved with schools is one of the best ways to do that.”

Two years ago The Church On The Way, founded by former Foursquare President Jack Hayford, formed a partnership with nearby Hazeltine Elementary School. They started with supplying notebooks, copy paper and other materials.

Now the effort is expanding, with about two dozen volunteers preparing to launch a one-on-one reading program with first-graders and reorganizing the school library. During an early August meeting with the principal, members were stunned to learn the school library closed five years ago because of budget cuts.

“That was eye-opening for our members,” Dan says. “Many had no idea the school was operating without a library or a school nurse, and without a computer training program.”

Similar needs in St. Ann, Mo., inspired Debbie Masters, senior pastor of New Voice Church (Midland Foursquare Church) to start New Voice Church’s Community Night, held each Wednesday during the school year. She acted after receiving a divine vision in which she saw faces of children from outside the church coming for tutoring, dinner and Bible-based activities.

The suburban St. Louis church hosts an annual free flea market to help parents prepare for the school year. More than 100 families attend the events, which offer free clothing, furniture and school supplies—all donated by members, and their friends and co-workers. 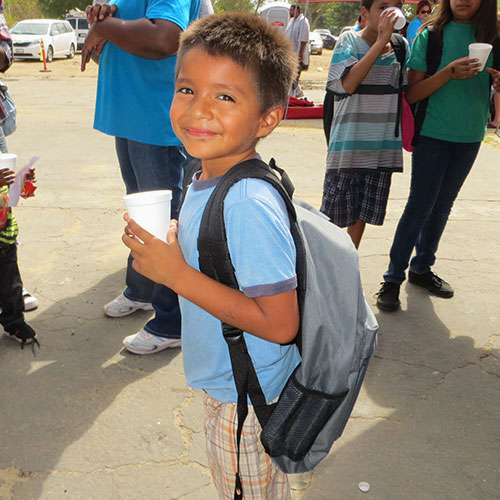 “What is amazing to me is seeing the cooperation of the St. Ann Police Department, the school district, and several businesses as we partner to serve at-risk children and families in need,” Debbie says.

Neighborhood needs prompted Grace Point Church (High Point Foursquare Church) in High Point, N.C., to start a summer feeding program in 2013. In addition to a hot lunch on Fridays, the church gave kids six days’ worth of breakfasts and lunches. After serving 25 children a week last year, summer 2014 averaged 39. During a 10-week period, that meant the church provided almost 5,500 meals.

Senior Pastor Terry Austin discovered this need at a pastors meeting. After he heard that 54 percent of students in his county received subsidized school lunches and often went hungry in the summer, the Holy Spirit asked him, “What are you going to do in your neighborhood?”

At the end of last summer, a family with five children got evicted from their home. The next Wednesday, two of the teens walked four miles to Grace Point. They couldn’t come the previous Friday but knew if they made it to the church, they could get food. Today all five are awaiting water baptism; they are among a dozen conversions linked to the feeding initiative.

In addition to attendance recently increasing to 65, in early August Terry and his wife, Beth, became co-pastors of a second campus in Greensboro, Word of Life (Greensboro Word of Life Foursquare Church). And, the High Point campus has launched a Hispanic Bible study and done such service projects as building a handicapped ramp.

Elias Abdallah has seen such multiplication at Journey Church (Bakersfield Dayspring Foursquare Church) in the heart of Bakersfield, Calif. Formerly the youth pastor, Elias, now senior pastor, moved the Back to School Party he had hosted elsewhere to Journey. It aimed to help students at a nearby middle school; more than 90 percent of them live in poverty.

This year’s party in late July attracted more than 500 people. The church gave away 300 backpacks of school supplies and a free lunch while hosting carnival games and other activities. Forty people raised their hands to make first-time decisions for Christ, with a water baptism service scheduled in the near future.

“Our attendance has gone from about 140 to 185,” Elias shares. “We have seen several families come and stay. Our team felt the event was a success and that we were a true light to the neighborhood.”

Back in Mooresville, N.C., David Giles sees a similar stirring. In addition to helping at its Back to School Bash in August, more members are interacting with neighbors and volunteering for other service projects. The church’s first missions trip is scheduled for next year to Jamaica.

“We’re seeing a change,” David says. “Folks are generous. It typically was a few helping with outreach, but we’re starting to see that grow.”

When God’s people extend a helping hand, there is no limit to what He can do.