My family wasn’t religious while I was growing up in the little coastal town of Lyman, Miss. I got my first taste of church when I attended a tent meeting at 8 years old and tried to give my heart to Jesus Christ. My attempt to meet the Lord was unsuccessful.

Somehow I always knew that God existed, and I wanted to know Him and please Him. After the preacher finished talking that night, I decided this must be a very good place to discover who Jesus is—but when I went to the altar for prayer, no one spoke to me, and I sat alone on the floor not sure what to do next. Twenty-five adults also went forward that night, and I was the only child. Each adult was prayed for, and I was ignored.

It took eight long years before I had another opportunity to meet Jesus in the town of Jackson, Miss., where I attended high school. The nagging awareness during these ensuing years that I was supposed to be doing something for God was finally satisfied.

As a result of being ignored at the altar, I decided I would never ignore a child who wanted prayer. This has been a lifelong passion of mine, to make sure children and youth receive ministry as equally as adults.

In my 16-year-old opinion, church was supposed to be quiet and reverent. When my brother-in-law took me to a Foursquare church for the first time, I was not impressed. It was a rough-looking place with sawdust-covered floors, uncomfortable benches, and people who shouted and clapped as they sang.

Before the night was over, I was saved and filled with the Holy Spirit. I delivered my first message in tongues, which was interpreted by another person in the congregation. I didn’t even know what was happening to me at the time, but I realized this was God, and He was real in my life.

Sister Maybelle Cutting was the lady preacher who was leading the meetings at the Foursquare church, and I was immediately drawn to her as a mentor and pastor. I told Sister Cutting that I wanted to do something for God.

Later, Sister Cutting took me with her and a few other ladies when she traveled 100 miles south of Jackson to New Orleans to meet Aimee Semple McPherson as she returned from traveling abroad. Her ship arrived in New Orleans, and our little contingent of ladies waved and smiled as Sister McPherson disembarked the ship.

Those traveling with Sister McPherson knew we would be there and introduced us to her. It was quite a moment for me, but apparently it was quite a moment for Sister McPherson, too. She took each one of us by the hands and hugged us warmly. “Thank you so much for coming to welcome me home,” she said, truly moved that we had made the trip. We dined with her that night at her hotel, and I was taken by her authentic personality, charming sense of humor and sincere love for people.

The following year, Sister McPherson was scheduled to hold revival meetings in Jackson, and I was given the responsibility of making all the arrangements for the meeting. I was 17, and threw myself headlong into the preparations, arranging the musicians, scheduling the largest auditorium in town, and inviting the mayor to attend and present Sister McPherson with a key to the city.

In 1942, I made the trip from Mississippi to Los Angeles to attend L.I.F.E. Bible College (now called Life Pacific College), along with a couple of other girls who also had been accepted to the college. Sister Cutting, who had graduated from L.I.F.E. years before in 1931, was our chaperone for the trip, and would also be our pastor at a new church in Sycamore Park, a Los Angeles suburb.

I soaked up the teaching and ministry experience we received as students. My faith was stretched, and my knowledge of the Lord grew enormously. Then, in 1944, Sister McPherson was teaching one of our classes—we were an unusually large class of 160 students—and she asked all of us to come forward so she could pray for each one. I can still recall the unique and powerful presence of Jesus in the room.

Before she left the classroom that day, she asked us students to pray for her. She had been ill, with a temperature of 103 degrees, and had to travel to Oakland, Calif., to preach at some large public services that would draw thousands of people. The following week, Sister McPherson was dead, and I will never forget the sense of loss I felt upon her passing. 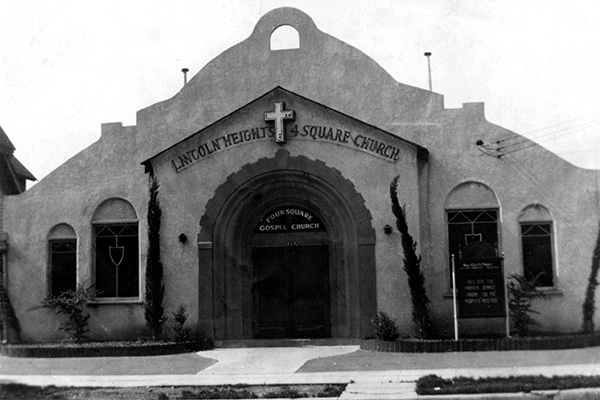 I graduated from college that year and became Sister Cutting’s co-pastor at the Sycamore Park Foursquare Church. For over 70 years now, I have served this same congregation, first as a co-pastor and then as the senior pastor when Sister Cutting’s ministry concluded.

Throughout my life, I have experienced a fair degree of resistance at the notion of a woman senior pastor. One female college student accused me of heresy, and I have seen men get up and walk out of our church when I got up to preach. The Bible says that in Christ there is neither male nor female, and I believe that God uses men and women equally in ministry.

I learned years ago from Sister McPherson that she realized the ministry was not about her. It was about Jesus Christ and the people He loves. Though she was famous, and perhaps the greatest divine healing evangelist in recent memory, Sister McPherson realized that none of what she did was because of her.

I was changed by the truth she spoke and the ministry she established. My prayer for generations to come is that they too will benefit from the lineage of faith within our Foursquare family and the power of the gospel that will change the world.