An Angelus Temple elder saved my life in 1939, when I was 7 years old. Doctors told my parents I had a weak heart due to my premature birth. They warned me to avoid extreme changes in body temperature.

After playing outside on a hot day, I took a cold shower to cool off. The dramatic change in body temperature caused my heart to stop beating. Trying to warm my body, my father covered me with blankets. But he could not restore my heartbeat, and my skin was turning blue.

My parents were students at L.I.F.E. Bible College (now called Life Pacific College), and a friend who was an elder at Angelus Temple happened to be nearby. God had the right man at the right place, and he literally rebuked the spirit of death—and my heart began beating again.

It would be years before I understood what had happened to me, but the experience established in me the lifelong conviction that God’s power and presence could accomplish anything He desired. For the past 50 years of my ministry, that same power has been available to heal when people call on Him in need.

After personally experiencing divine healing, I also had the opportunity of learning about God’s ability to heal as I sat beside my parents during night school classes at the college. During those years, it was common for parents to bring their young children with them to class. I absorbed much more truth as a child in those classes than many people thought possible. Years later, when I attended as a paying student, Dean of Students W.B. Teaford joked with me that I had already been through Bible school once before.

It would be years before I understood what had happened to me, but the experience established in me the lifelong conviction that God’s power and presence could accomplish anything He desired.

Maybe because of my near death experience as a child, God gave me the ability to feel the physical pain of others. Once, while ministering in a service, my arms and shoulders became so painful I could hardly move them. By that time in my life and ministry I realized what was happening.

I called out for someone with that type of pain who wanted prayer, and after some encouragement, a woman came forward. I sensed in her some hesitation and told her that even if she did not need healing, I definitely needed to be delivered from her pain in my arms. So we prayed.

God miraculously released her from years of pain, and she was able to lift her arms in praise to His name. I was grateful, too, that I no longer felt her pain. 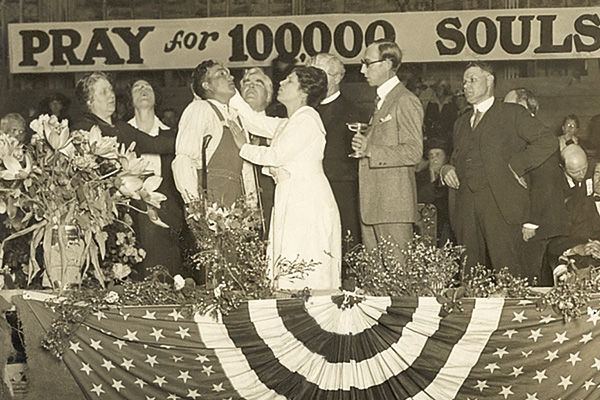 Sister McPherson ministering the baptism with the Holy Spirit

I also have childhood memories of special services Aimee Semple McPherson would hold once a month or so for people who wanted to be filled with the Holy Spirit. She would preach on the power of the Spirit and then pray over people until they were filled.

I will never forget those meetings or the power of God’s presence. Sister McPherson was extremely patient and kind as she prayed. Never in a hurry, she prayed until each person was filled.

During one of these services on a Saturday afternoon, I was sitting in the second balcony of Angelus Temple, where my father was an usher. The power of God was so definite in that service, I had a hard time seeing Sister McPherson on the platform because of what I can only call a cloud of God’s presence.

Sister McPherson was extremely patient and kind as she prayed. Never in a hurry, she prayed until each person was filled.

Years later, while I was a student in Bible college, several of us students were ministering before the Lord during a day school chapel service when the power of God fell. Most of us couldn’t stand; we lay on the ground because of the fullness of His presence. This went on for two full days. When the night school students came into the room for their chapel service, they too fell under the power of God.

It was marvelous to experience the fullness of God’s Spirit in such tangible ways. Throughout my life and ministry, I can say that God has been faithful to perform signs and wonders like these, and many more, when the people of God depend on Him and expect Him to move on their behalf.

This article is adapted from a video interview with Myron Corser, who served as an ordained Foursquare minister for five decades.