An urgent appeal has gone out on behalf of Foursquare family members among those at risk in one of the world’s greatest-ever humanitarian crises, yet who are also poised to be witnesses of hope and God’s love in the face of desperate need.

The 20 million people currently on the brink of starvation across East Africa include thousands who have come to faith through Foursquare’s ministry in South Sudan—some of them forming churches as they wait with others for relief aid in refugee camps in neighboring Uganda and Kenya.

“The situation is very bad, but there are signs of hope,” says Karen Grubbs, Foursquare Missions International (FMI) missionary to South Sudan, who visited two refugee camps in Uganda in January with Foursquare teams working there. “God is there, and the cross brings hope.”

Part of Foursquare’s ministry in South Sudan for more than 15 years, Karen is currently serving as liaison in a major drive by Foursquare Disaster Relief (FDR) to focus prayer and practical support for the region, where the widespread threat of starvation has largely failed to garner international media attention.

South Sudan, Yemen, Somalia and northern Nigeria are directly facing famine. Meanwhile, Uganda and Kenya are threatened by food shortages because of the strain of trying to cope with the massive flood of refugees from neighboring South Sudan, wracked by civil war since 2013.

Across the region, five times as many people are at risk today as during the Ethiopian crisis of the 1980s that drew global attention and action. While environmental factors figure as they did back then, the current situation is also the result of internal conflicts that have displaced many, with the unrest preventing aid from being distributed in some parts. 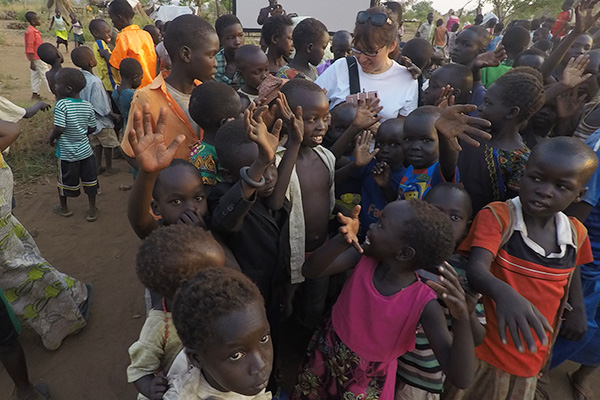 The needs and the opportunity they present to bring God’s love into places of human suffering by offering practical help and sharing the gospel are the heartbeat of FDR’s ministry. The relief division of Foursquare has already provided funds for Foursquare leaders in South Sudan, Kenya and Uganda to buy some supplies of maize flour, but much more help is needed.

“Basic foods are vital just to keep people alive,” states Chad Isenhart, FDR’s international operations chief. In some of the camps, he notes, refugees have been receiving food only every three days because supplies are so short.

“Many of these are our family members at risk of dying from starvation if we don’t help,” Chad adds. “At the same time, it’s amazing to see the church sprout up as the Lord is at work, with these little pockets of believers loving and taking care of one another and others. God is taking all these different players and making something that is terrible into something that could be used for His glory.”

Chad urges Foursquare members to pray for believers in the camps to be empowered to be a witness to others. He also asks Foursquare leaders to try to raise awareness of the crisis in their churches and communities, in the hope that heightened international awareness might help bring an end to the conflict.

He suggests that several factors might be at play in the apparent lack of world concern over the plight of so many, including preoccupation with domestic affairs and the Syrian refugee crisis, weariness from previous African crises, and the difficulty faced by the media in reporting on such a complex situation.

Currently based at Living Way (Seattle Foursquare Church) in Washington, Karen requests prayer for a resolution to the conflict in South Sudan, and for wisdom and protection for Foursquare leaders ministering in difficult situations.

One Foursquare leader still in South Sudan—where as many as 70,000 first-time decisions for Christ have been recorded through Foursquare’s ministry—had been riding in a car that was fired upon, she recounts. Though the vehicle was riddled with bullet holes, he escaped uninjured “by the hand of God.”

In appealing for help from Foursquare churches and members, Frank Greer, FMI’s area missionary to East Africa and Southern Africa, echoes the words of the apostle Paul in Titus when he urged believers to devote themselves to good works “to meet urgent needs, that they may not be unfruitful” (Titus 3:4, NKJV).

Noting the unprecedented scale of the need in the region for which he was appointed area missionary in February, Frank asks for support for FDR “so we can assist our brothers and sisters in reaching out to people who are in such great need. It’s a time for us to rise up, a time for us to respond to the call of God.”

FDR is readying more information on how churches can respond to the needs, with a guide to practical action steps. In the meantime, immediate donations can be made to help buy rice, beans, oil, salt and soap, in addition to maize flour.

How You Can Pray:

How You Can Help: