Aimee Semple McPherson called me “the little bride” the day she performed the wedding ceremony uniting me with my husband, Roy, in 1944. Our marriage lasted 70 years, until Roy went home to be with the Lord in 2014.

The ironic part of Sister McPherson’s comment is that I stood at least three inches taller than she did. When she called me “the little bride,” she had to look up to see my face. She had a wonderful sense of humor that way. Following our ceremony, we celebrated at a reception with a few friends and other L.I.F.E. Bible College (now called Life Pacific College) students in Sister McPherson’s parsonage next door to Angelus Temple.

Although Sister McPherson’s influence was great in our lives, my journey serving Jesus began many years before under the ministry of another lady evangelist who came to my hometown of Columbia City, Ore., to hold a tent meeting. I grew up in a family of 15 that did not attend church. Some of my siblings were curious, as I was, about the lady evangelist and her tent meeting. We decided to go see what it was all about.

I was the worst behaved child and had a reputation at school that I would not be proud of today. None of my siblings accepted Christ that night at the tent meeting, but I did. I love to tell people about my conversion, especially the part about my teachers asking me if I was sick because my behavior had changed dramatically after I got saved. When I stopped fighting and swearing at school, they really thought something was wrong with me. Quite the opposite was true: I had been converted to Christ, and from that day forward my life would be entirely different.

A church was birthed out of the tent meetings in Columbia City, and The Foursquare Church sent Pastor Jack Carmine and his family to pastor the congregation. I was 12 and was old enough to become one of the charter members of the new church. When I graduated from high school, I went to work for Pastor Carmine and his family, helping them with their children and household duties.

Later, I was accepted to attend L.I.F.E. in Los Angeles and was reluctant to tell Pastor Carmine that I was leaving Oregon and his family. Before I could break the news to them, Pastor Carmine sat me down one afternoon in the living room to tell me they, too, were leaving Oregon. He had accepted a position at L.I.F.E., and the family would also travel to Los Angeles to serve the Lord at the same college I planned to attend. 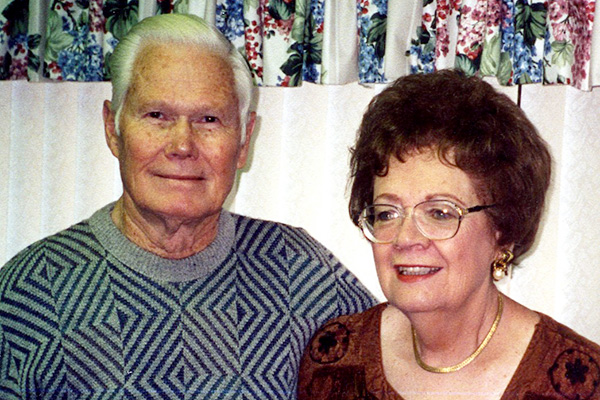 While at L.I.F.E., I met Roy, and we fell in love. He was 21 and I was 20 when we wed in January 1944. That June, after we graduated from college, Roy and I spent a season in prayer before making our way to Lima, Ohio, to pitch a tent and conduct revival meetings at the invitation of Supervisor Warren Coon in what was then called the Eastern District of Foursquare Churches.

Later, we assumed the pastorate of a Foursquare church in Cambridge, Ohio. A Baptist woman faithfully attended her church on Sunday mornings and our church on Sunday evenings. During a prayer meeting one night, I overheard her praying aloud for God to supply her with coal. Winter temperatures in Cambridge that year had plunged to 16 degrees below zero.

Roy and I received $16 a week from the church as long as money was left over after other bills were paid, but we knew we needed to help this woman. So we prayed. The old place where we lived had a linoleum floor in the kitchen that was peeling up at the edges. One day, while I was sweeping the floor, I saw something under the edge of the linoleum. It was a $20 bill! I was thrilled at the way God provided the money to help us buy this woman some coal.

Another time, while pastoring in Canada, some people told Roy and me that they were saved during an evening service while Roy was preaching. They said a family member was bedfast and dying of cancer. They asked us for Bible verses so they could pray and minister to the woman. I gave the people a long list of Bible verses on healing and sent them home to pray for her.

Shortly thereafter, Roy was preaching in a service and stopped when a woman approached the pulpit. She said God had healed her, and now she needed to get saved. It was the woman who just days before had been in bed dying of cancer! Our church in Canada never really took off, but nearly 20 people from this one family accepted Christ because of the way God miraculously healed this woman.

The Lord [eventually] led us to Redlands, Calif. Imagine our surprise when we discovered that the pastor of Redlands Foursquare Church was my old friend from Oregon—Jack Carmine and his family.

Just like Sister McPherson, I guess the Lord has a sense of humor. He put us in the perfect place to be ministry partners alongside longtime friends and pastors whom we knew and loved. Then He gave Roy and me well-paying jobs so we could be financial supporters of the church.

Roy taught Bible classes at church, and for many years I have led a lady’s quilting group that raises money to support missionaries and ministries. I also have the privilege of playing the piano and singing with “the old people” at two local nursing homes. I’m in my 90s, and tell the Lord I’ll keep serving Him as long as He gives me the strength.

After leaving full-time ministry, Blanche and Roy Lewis ministered for 15 years in an RV park in Fontana, Calif., and raised more than $85,000 in offerings during those years to benefit Foursquare Missions Press. Now in her 90s, Blanche serves as an assisting minister at New Life Foursquare Church (Redlands Foursquare Church) in Redlands, Calif.