Their fun-loving, entertaining personalities fill Honolulu’s airwaves before the sun peeks over the island each morning. The hosts of HammerTime, Krater 96.3’s flagship morning radio show, Gregg Hammer, Shawnee Hammer and Davey D see each day as an opportunity to live out their faith on the air. 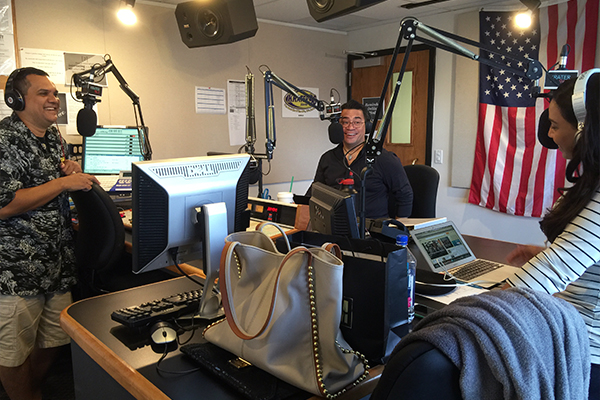 Gregg Hammer, Shawnee Hammer and Davey D live out their faith on their morning radio show in Hawaii.

“It’s a secular station, so we can’t preach on the air. But the show is about our lives, so we share about how we all go to church on Sundays,” Shawnee says. “And I think people can really hear how much we love each other—hopefully that’s God’s love shining out.”

With more than 50 years of collective broadcasting experience, these three never thought they would be hosting the same show. “In fact, Gregg and I used to work for competing stations during the same time slot,” Davey notes.

Shawnee shares that, five years ago, she and Gregg weren’t even sure they would be married for much longer, let alone working together each morning. “But God redeemed and restored our marriage,” she says.

So when Krater approached Gregg and Shawnee about starting a morning show after Gregg had left his former station, they knew God was orchestrating something big.

“We were totally on board with the idea because we had such a renewed relationship,” Shawnee says. “The whole show was really a God thing—He brought the three of us together for His purpose.” The three have been teaming up to host HammerTime for the past two years.

“We made it clear that we were not going to do the kind of show that Gregg came from, which was full of gossip,” Shawnee explains. “We wanted to be entertaining and funny, but without being detrimental to our walk with God.”

For Gregg, covering what’s happening in society on the air is another chance to live out his faith. “We try to bring attention to issues without coming off like we’re picketing against things or hatemongering. Instead, we do it in a gentle and kind way,” he says.

“I’m trained in a secular industry, so I never would have thought that I would end up on stage at church,” Davey shares. “But I’ve been up there doing announcements and even offering messages. It’s been great to use my talents for God’s purposes.”

Similarly, Gregg and Shawnee have had the opportunity to share with their congregation, C4 Christ Centered Community Church (Diamond Head Foursquare Church) in Honolulu, pastored by Fernando Castillo, who also serves as supervisor of the Hawaii District.

“C4 was the first place Gregg and I were able to share the testimony of our restored marriage,” Shawnee says. “We’ve all been blessed by our churches to be able to serve and to use the stories God has given us to share with others.”

In addition, Gregg recently became a credentialed Foursquare minister and has joined the teaching team at C4.

For Gregg, Shawnee and Davey, ministry doesn’t stop at the walls of their church buildings. Instead, it continues as they spend time with family, invest in their communities, and as they step up to the HammerTime microphone each weekday morning.

“We know we can be a light to others by using our lives as the example,” Shawnee says. “You don’t have to constantly hit people over the head with Scripture—you can live out that Scripture by loving someone who has hurt you or by having patience and kindness. That’s really what we focus on—trying to be the example that Jesus gave us in our everyday lives.”

ShareTweetEmail
Shannon Linton is a content strategist in the Los Angeles area.
Advertisement