With the eyes of the world turned on Brazil for the 2016 Olympic Games, Foursquare family members—including a competing athlete—are among those who will be drawing attention on the streets and in the stadium.

More than 200 young people from Foursquare churches across the country will be gathering in Rio as part of a large-scale evangelism initiative, which will also include a Foursquare jump rope ministry team from the U.S. Meanwhile, a Foursquare church in a former theater not far from the main Games venue will be a central prayer, training and organization hub for the wider outreach, which will involve Christians from around the world.

“It’s an incredibly strategic place,” says Jonathan Hall, Foursquare Missions International‘s (FMI) global ministry coordinator, who was born in Brazil to missionary parents and served there until relocating to the U.S. “We hope it will be a launching pad for some of the great things God wants to do in Rio.”

Visiting teams will take part in prayer and intercession meetings, public worship events, and street drama and evangelism. And bringing a unique flavor to the outreach will be a sports team led by Joe Nix, a Foursquare credentialed minister from Brighton, Mich. He and his wife, Renee—currently leading a separate group to Spain and France—are church planters who head a sports ministry team that performs gymnastic jump rope skills, and then has fun with bystanders trying the sport, engaging them in conversation and prayer while also handing out evangelistic bracelets.

Jonathan, who recently returned from a few days of helping outreach coordinators in Brazil, hopes that the spotlight of the August 5-21 Games will spur worldwide prayer for a nation that faces both great opportunities and some major challenges, and where the gospel has greatly advanced.

Foursquare is one of the largest Pentecostal movements in the country of some 210 million, with around three million members in almost 20,000 churches. Since it was established in 1951, Foursquare’s presence in Brazil has been marked by a strong emphasis on evangelism and supernatural acts of God, Jonathan notes.

At the same time, the country seems to be in crisis, with an ongoing presidential impeachment, significant corruption scandals, economic uncertainty, widespread violence and fears over the Zika virus that has kept many visitors away.

Such issues have created “a perfect storm that we pray the Lord would use for the advancement of his kingdom,” says Jonathan. “It’s an opportunity for the church to rise up.” He appeals for prayer for security at the Games, and for hope and the advancement of the kingdom of God in the country as a whole.

“The country is beautiful; the people are delightful; there are so many positives,” he says. “Brazil has such unbelievable potential.” Yet there is currently a loss of hope, especially among the young. “It’s so sad to meet young person after young person who asks for help to leave the country.” 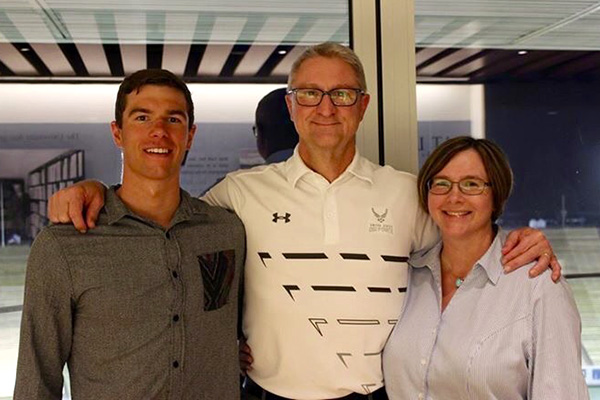 For members of Lompoc Foursquare Church in Lompoc, Calif., their attention is particularly focused on just one of the more than 10,000 international athletes expected to compete at the Games.

Josh Prenot, 23 years old on July 28, will swim for Team USA in the 200-meter breaststroke. Josh is a member of Lompoc Foursquare, where parents Bill and Tammy serve on the council and worship team, respectively. Church members prayed for him when he secured his Rio place with a personal best time—also the second-fastest ever swum—at the Olympics trials in June.

“There has been an incredible outpouring of love and prayer support from our church family,” says Bill, adding that he and Tammy, who will be poolside to cheer Josh on when he competes Aug. 9, are “beyond proud” of their son, who is finishing up his studies at University of California Berkeley.

The Prenots discovered Josh’s talent when he was 6, later moving to Orcutt, Calif., to place the family midway between their Lompoc church—where they have been members for 17 years—and his swim club in Santa Maria, where he trained six days a week.

“God is so good,” Bill adds. “He has blessed us with a son who has had a huge dream, but who has matched that huge dream with a huge commitment to achieve the dream. We are very grateful.”

Jonathan adds: “May our prayers agree with and cover the many believers serving and competing, and the millions there praying that His kingdom come into Rio.”