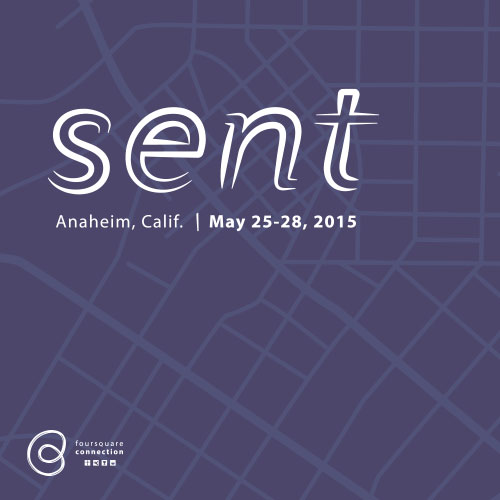 Pastors, church leaders and international visitors who gathered in Dallas for the 2014 gathering were part of the Reimagine realignment discussions and decision-making that is setting Foursquare’s course for the future. They also experienced program innovations designed to make the event even more enriching.

“The speakers were well received, but that turned out to be secondary to the sense of a direction there was for us all as a movement, that we are heading somewhere together,” says Tammy Sevcov, Foursquare’s events manager. “There is a momentum that is carrying us forward into 2015.”

Speakers and topics for “Sent” are currently being finalized, but Foursquare Connection 2015 will be dealing with some important ongoing Reimagine business, which may include voting on proposed bylaw changes.

Drawing from Jesus’ words in John 20:21—“As the Father has sent Me, I also send you” (NKJV)—the “Sent” theme aims to build on last convention’s Reimagine focus.

“There are two facets,” says Foursquare President Glenn Burris Jr., sharing his vision for the event. “We are all sent. God has sent us to certain people, to certain communities. But, as ministers, we are also senders; we need to be equipping people and helping them identify where they are sent to. For some, it may be to their neighbors, to the homeless, or even to another country.”

With anticipation high and a location that is favorable to the sizable Foursquare population in Southern California, the planning team is preparing for a large registration. The last time Foursquare Connection was held in Anaheim, in 2009, it saw record attendance for the annual event of more than 5,000.

“We are all sent. God has sent us to certain people, to certain communities. But, as ministers, we are also senders.”

Registration, online and by phone, will open on Monday, January 26. The Early Bird general registration rate through the end of February will be $199, with spouse or guest (from the minister’s church) able to attend also for $169. ForeRunners registration will be $99, while it will cost just $50 to register the youngest convention attendees in the successful Kids + Youth program.

Special accommodation rates are available at the Anaheim Marriott Hotel, within walking distance of the convention center, and at four other hotels in the area that can also be reached on foot. All will have free Wi-Fi, and most will offer free gym access. Rates range from $99 to $115 per night.

Foursquare Connection 2015 will begin at 6:30 p.m. on Memorial Day—Monday, May 25—and conclude on Thursday, May 28, by 1 p.m. The afternoons will be kept free from scheduled sessions to give attendees an opportunity to connect with others informally, and for visitors to make the most of their time in the Southern Californian area.

In addition to attendees being able to enjoy the amusement parks and beaches, there will be several tours, including to Los Angeles to visit the Foursquare Heritage Center, located in founder Aimee Semple McPherson’s former parsonage; Angelus Temple; and the Foursquare central offices. A separate tour will take people to Life Pacific College (also known as LIFE Bible College) in San Dimas. Free transportation will be available, though registration will be required.

“We are very excited because the last time we were at the Anaheim Convention Center, the location worked very well for us.” says Tammy. “And since then, there have been great improvements, so we expect 2015 to be even better in every way.”

Follow Foursquare on Twitter (@wearefoursquare) for updates on who will be speaking at convention, and when registration opens. Visit the official Foursquare Connection website for more information.