2014 was a year of more ordinations than usual for The Foursquare Church nationwide. As of mid-November, 652 ministers had been approved for ordination in 2014. Corporate Secretary Sterling Brackett anticipated that about 600 of those ordained by year’s end attended a laying-on-of-hands service. 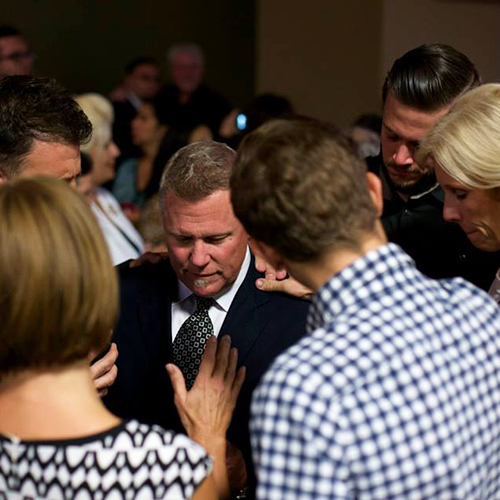 The restructuring of licensing automatically made more ministers eligible to become ordained, but the main reason for the increase was encouragement from General Supervisor Tammy Dunahoo that helped more ministers understand the value of ordination.

As Sterling explains: “It really isn’t just a hoop to jump through. It is a spiritual act and a great responsibility. That understanding will become more pervasive as supervisors encourage their pastors to be ordained.”

In an effort to eliminate confusion, at Tammy’s prompting The Foursquare Church eliminated the district license two years ago. This license was originally granted to those who had not completed formal training but who were active in ministry.

“During the Charismatic Renewal in the early 1970s, we experienced a need for more ministers to serve our churches,” says Sterling. “Foursquare leaders developed a process to enable ministers to serve while they received the necessary training to help equip them for ministry.”

In eliminating the district license level, the denomination upgraded district licenses to the U.S. license (formerly known as the international license). Once leaders have served for two years as U.S. licensed ministers, they are then eligible to be considered for ordination.

Ordination is not automatic after those two years, however. Ministers eligible for ordination must complete a process to attain it. The basic steps are as follows:

But Sterling is clear that the ordination process is much more than just filling out forms and waiting for approvals. In fact, he considers the administrative part of the process fairly insignificant compared to the weight of ordination itself.

“Ordination is literally the setting apart for service,” he affirms. “The expectation is that these people will commit their lives completely to the preaching of the gospel for as long as they live.”

“My decision to become ordained signified that I decided to devote my life completely to the church in ministry,” Robin explains. “Then to have the official seal of approval from the Foursquare leadership showed me they recognized God’s call on my life and fully supported it.”

Like Robin, Luke Harmon, an association member at a non-Foursquare church in the Southwest District, also feels that ordination demonstrates an affirmation for his ministry.

“Ordination helps me walk more confidently in what God is already doing in my life,” Luke says. “Being ordained helps solidify the fact that my life will always be geared toward serving God by ministering to His church body.”

For many ministers journeying through ordination, the laying-on-of-hands service was the culminating moment when their choice revealed its true spiritual significance.

“From the moment I walked into the church [for the ordination service], I felt I was walking into a new level of ministry,” says Marysol Ramos, assisting minister at Dios Restaura (Glendale Hispanic 2 Foursquare Church) in Glendale, Calif. “The laying on of hands gave me a sense of not only a higher commitment, but I also realized my responsibility before the Lord. When I next preached, I felt a stronger sense of anointing.”

The laying-on-of-hands ceremony was also impactful for William Furrow, senior pastor of Springs of Life (Cedar Rapids Foursquare Church) in Cedar Rapids, Iowa, who describes the evening as “spiritually catalytic.”

“When you have leaders and peers praying for you and laying hands on you, it is not only affirming, but gives you a sense you aren’t alone in ministry. Rather, you are part of a family with a proud history of anointing that they’re now passing along to you,” William says.

Legendary Foursquare leader Nathaniel M. Van Cleave, in The Meaning and Challenge of Ordination, summed up well the importance of this step in ministry: “The call to ministry must come from God. It is not enough for people to select the ministry from a number of occupations … They must be empowered and set apart by the Holy Spirit to do a divine work that is meant to have eternal consequences.”