The two Foursquare presidential candidates have just returned from six Presidential Forums that took place across the country in a two-week time span. The goal? To introduce themselves as widely as possible before the election takes place at Foursquare Connection 2019 in Nashville, Tenn., May 27-30.

With absentee balloting part of the process of selecting a president for the first time ever, Tammy Dunahoo and Randy Remington traveled to six locations to share their hearts, their histories and their hopes for the future with regional gatherings of of diverse ministers, leaders and young adults who may not be able to attend next month’s annual convention and get to hear them speak there when voting takes place.

After each candidate gave a 20-minute introduction, they responded individually to 40 minutes of questions submitted by Foursquare leaders across the country. Among the many subjects were their views on discipleship movements, church planting, care of leaders, multicultural and inter-generational ministry, and their priorities if elected president.

Both candidates spoke from their many years of Foursquare leadership and ministry experience—Randy as lead pastor of Beaverton Foursquare Church in Beaverton, Ore., since 2003, and Tammy as general supervisor and vice president of U.S. operations for The Foursquare Church since 2009.

Each highlighted the importance of holding true to Foursquare’s historical distinctives in a changing culture and church world. Randy spoke of Foursquare as “a church that loves … evangelism … global missions … the moving of the Spirit.” For Tammy, “there is absolutely no human agenda that can accomplish the mission. If it is not the work of the Holy Spirit … we accomplish nothing of eternal value.”

Randy spoke of Foursquare as “a church that loves … evangelism … global missions … the moving of the Spirit.” For Tammy, “there is absolutely no human agenda that can accomplish the mission. If it is not the work of the Holy Spirit … we accomplish nothing of eternal value.”

They also offered their sense of priorities. Tammy’s included a greater emphasis on leadership development, creating a better “onramp” for new leaders into Foursquare service, and a renewed commitment to, and resolve for, discipleship that focuses on children, youth and young adults. Randy’s included strengthening Foursquare’s identity and sense of family, championing a culture of prayer and emphasizing a commitment to the Great Commission.

The forums also provided a glimpse into the candidates’ personal lives—Tammy recalling the impact of both being adopted and later reuniting with her birth family, Randy telling how a profound encounter with the Holy Spirit as a teenage pastor’s kid “afraid of getting left behind” led to radical change. In response to one question about personality types and self-awareness, they disclosed their Enneagram numbers: he a 9, she a 1.

While most of the sessions were serious in tone, there were splashes of humor. Randy said that he gave God the glory for all that happened in his ministry, but also told Him, “I ain’t taking the rap if it goes down, either, because it’s Your call; You put me here.” Meanwhile, in addressing a question about care for leaders, Tammy observed that “sometimes, the most spiritual thing you can do is take a nap.”

The forums were moderated by Adam Davidson, Foursquare’s vice president, COO and corporate secretary, who said the events created “a lot of interest,” with several hundred people attending in person and more watching the livestreams. All livestreams will remain available to watch through convention.

The Presidential Forums have concluded and are no longer available to view. Read additional articles from the 2019 presidential election.

Foursquare is uniquely wired for the days ahead 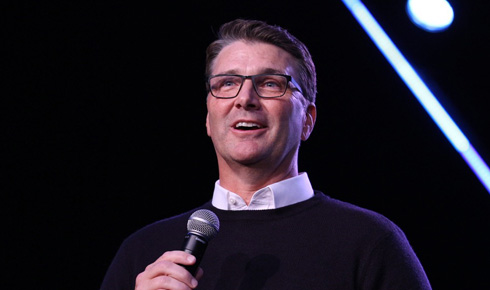