Maria Eugenia Martinez had an unlikely role as a 20-year-old in Buenos Aires, Argentina, in the 1970s: She was young, a woman and—a pastor. It was so rare that many thought her husband, Hugo, was insane for positioning her to co-pastor alongside him.

“Some people would say to him, ‘Hugo, you are crazy to name your wife pastor,'” recalls Maria, an ordained Foursquare minister who has earned a bachelor’s degree in theology and a doctorate in divinity. Forty years later, she is changing hundreds of lives as a loved and respected senior pastor, through ministry and education.

“The biggest challenge [was] losing my husband,” Maria admits. The 59-year-old pastor shares she was always in love with the man she was married to for over three decades—they were a team. They raised three girls and shared the joy of becoming grandparents. In 2008, he was diagnosed with pancreatic cancer; they both prayed and believed God would restore his health.

“At first I didn’t understand, but I said, ‘Lord, I accept your will.’ Before he passed, he told me, ‘It’s your turn now,'” recalls Maria.

The soft-spoken yet assertive woman has courageously accepted the task. Although she is still questioned by some because she is a female pastor, she is confident God is using her in this role and believes that she has a “triple anointing”: the Holy Spirit’s, her late husband’s and an anointing from The Foursquare Church. Her schedule is jam-packed with conferences, meetings and any opportunity to raise up leaders. 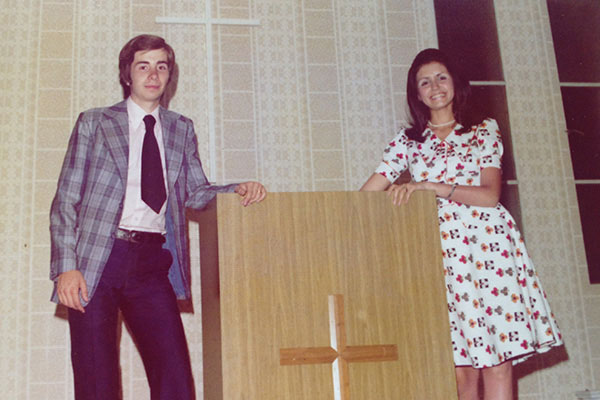 In the 1970s, Maria became co-pastor with her husband in Argentina, breaking gender expectations and establishing lifelong service in ministry.

As a woman, Maria doesn’t take her calling to encourage and lead other women lightly. She hosts an annual women’s revival conference titled “Transformers of Nations” where she reminds fellow pastors of who they are in Christ as they work through similar challenges they may face, and equips them to grow as leaders and wives.

In her local community, she is always looking for ways to meet the needs of those around her. In April and May, dozens of congregants participated in a new project called “God’s Love Invasion” by following a model developed by an Argentine pastor. Believers as young as nine years old went out into the neighborhood to write down prayer petitions, and on one particular day the church prayed over the requests for 24 hours. They continue to follow up with phone calls and have learned family members were healed, drug-addictions are subsiding, and some who were looking for jobs were employed in a matter of days.

In addition to the evangelistic work the church carries out, people are also provided with an opportunity to dig deeper into God’s Word. Maria designed a three-year seminary using the textbooks she and her late husband authored.

Her passion and vision to promote education goes beyond teaching the adults in the church. According to the 2010 U.S. Census, the city of Orange, which has a population of about 140,000, is 38.1 percent Hispanic, and in 41.8 percent of homes a language other than English is spoken. In 2012, Maria noticed there were children at Centro Cristiano Esperanza who were born in the U.S., whose parents did not speak English, and as a result of the language barrier were falling behind.

She humbly admits she hasn’t mastered English enough to tutor the kids, but that didn’t stop her. With the help of university-level students, she launched a tutoring ministry; they help at least 15 children every Wednesday evening for two hours, and it is open to the local community. “Everyone who goes to the tutoring, they all raise their grades, all of them, all of them,” Maria emphatically states.

“There [are] us mothers who cannot speak English, and our children need help with homework,” explains Griselda Franco, a domestic worker whose seven-year-old son was struggling in math one year ago. “I would get frustrated because I didn’t know how to explain, and this helps us a lot.” Her son is not only excelling in math; it’s one of his favorite subjects now.

“I have people at universities, colleges, and I rejoice in that,” Maria says. She admits life in ministry is not always easy, and there were times when she thought maybe there was something “easier” she could do. She could have pursued a career in education, one of her passions; it may have been easier.

But she explains that through the most difficult times in life and in ministry, what has kept her moving forward even when she is weary, tired or discouraged is God’s calling. She encourages other leaders by saying, “Whatever the circumstance, you have to stand firm in what God spoke to you.”

ShareTweetEmail
Anabel Munoz is a graduate of Biola University and a news reporter in Los Angeles.
Advertisement