When it comes to reaching a postmodern culture that is increasingly ignorant of the Bible, Piet Brinksma thinks Americans can learn a lot from believers in the Netherlands.

In the past, some 80 percent of Holland’s population had some connection with a church. But the outcome today of following a “God is dead” theology in the 1960s, says Piet, who serves as Foursquare’s national leader there, is a culture that no longer considers Christianity a viable option.

“The challenges are getting a conversation going at the depth of being able to share Christ,” explains Piet, who also pastors Rafael Church in Amsterdam-North, one of the city’s boroughs. “It is impossible to share Christ from a platform or soapbox. We have to get involved in others’ lives and earn a chance to share Christ.”

That may sound familiar to American pastors. But Piet says the fading of church from the Netherlands’ national life for more than two generations has given Christians there less “baggage” to overcome. Because most Dutch people know so little about Christianity, he says, that leaves them more open to evangelistic approaches. Piet thinks Americans who come there on missions trips can learn to release their anxieties over discussing faith or church.

“I think we are more ahead in our church decline in postmodern, post-Christian life,” Piet states. “We have had more time to deal with it and learn from it. We have something to share with the American church. Unless there is a big revival there, what we are experiencing will come to the United States.”

Learning from partners such as the Amsterdam church is only one of many reasons for churches to forge missions partnerships, says Brita Pinkston, co-pastor of Pasadena Foursquare Church just east of Los Angeles. An associate pastor until becoming lead pastor with her husband, David, in 2011, Brita calls missions Pasadena Foursquare’s lifeblood.

The church’s missions involvement extends back to the early 1990s when Ralph Torres, then the senior pastor, helped train pastors in Sri Lanka. It accelerated in 2002 after one-time youth pastors Adam and Sarah Hartel went to the mission field in Norway. Pasadena Foursquare has been sending youth teams overseas every summer since.

The key is returning consistently, says Brita, who also serves as missions representative for the newly formed Southern California District. In her district position, she is working to establish teams to equip pastors and members, regardless of church size, to get involved in long-term relationships. After all, it doesn’t take a megachurch: With only three full-time staff members, Pasadena Foursquare averages 200 in Sunday attendance. 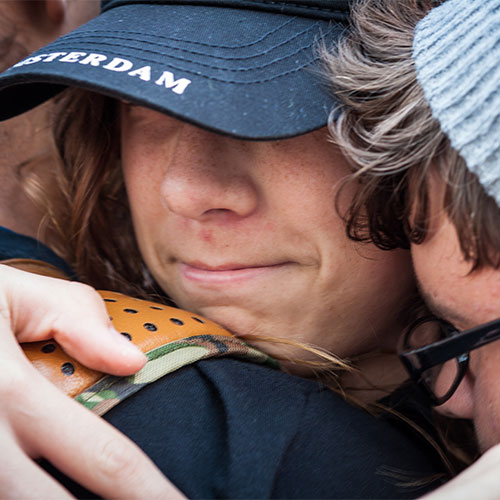 However, once a church starts, it must continue. Through the years, the most precious reaction Brita has encountered overseas is, “You came back!”

“Missions is relational,” Brita asserts. “Without consistency, you have a nice experience with very little longevity. With consistency, we have seen the culture of our church change. Kids who weren’t even born when we started now dream of the day they can join the team.”

Among the early dreamers was Max Boyle, just 13 when the church made its first trip to Norway. Now married, he and his wife, Jasmine, led teams to Amsterdam and Estonia this summer.

The visit to Amsterdam occurred just two weeks after a team of nine from the Netherlands’ Rafael Church made their first missions trip to Southern California. There they linked up with another ministry to conduct outreaches in Pasadena and two other L.A.-area neighborhoods.

“Our church was very blessed by their presence,” Brita affirms. “We saw our churches, not just pastors or missionaries, tied in relationships and commitment. This was building up the body of Christ.”

Across the Atlantic, such partnerships are strengthening the Hartels’ work in a neighborhood of east Amsterdam, about 20 minutes from their home church in the northern part of the city.

“This has gone way beyond supporting Sarah and me,” Adam, now a Foursquare Missions International missionary in Amsterdam, says. “Every year we’ve been overseas, they’ve sent at least one team, which is a considerable investment. Brita has written the book on how to not just take teams overseas but partner with a region. We say it takes a minimum of three years. You don’t have a relationship until you come back more than once.”

An emphasis on the long term includes a willingness to shed the American church’s focus on numbers. In the Netherlands, the conversion count is modest. For example, one convert came to Christ after a two-year-long relationship that included attending Bible studies and ministry activities.

Several months ago, a woman who had visited the café that is part of their multi-faceted outreach came seeking help. She told of throwing out all her non-Christian religious books and paraphernalia, and wanting to become a Christian.

When asked why, she replied, “When I’m with you, I feel like I’m at home.”

These kinds of stories are what make partnerships worthwhile, says Piet Brinksma.

“It means a lot,” he says of missions teams coming to Amsterdam. “If young people from America and other countries come to share Christ in your town, that’s a blessing. It’s humbling. And when I meet David and Brita, we are on the same team. Their calling and ours are connected.”