When he launched Life Church (Angleton Foursquare Church) in Angleton, Texas, in 1985, Senior Pastor Cere Muscarella used traditional church growth methods. That all changed after a personal epiphany in 1995.

God showed Cere that a lot of members, money in the bank and a nice piece of property didn’t necessarily make an impact for His kingdom.

“We weren’t building the kingdom of God; we were just a group of people,” the pastor of Life Church recalls. “I thought it was time to give this church to someone, move on and build another. Then I heard God say, ‘I desire transformation more than transfer.'”

That reminded him of the Lord’s instruction in the early days to build a church, not a business-like operation. At first, he had thought that meant to govern with a light hand and casual dress (such as preaching in shorts). However, after his watershed moment, Cere came to appreciate that Jesus didn’t intend for His church to be a triangle with the pastor at the top and everyone else subservient to the leader.

Although it took several years to establish a new paradigm, the staff designed an inverted pyramid. Instead of governing from the top, they sought to create a catalytic environment where people lead out in ministry as the staff supports them.

“We show them the way from the bottom,” says Cere, whose church averages 870 on Sundays and nearly that many on Wednesday nights, when its children’s and youth program takes center stage. “We developed a two-generation-down concept. I’m 65, so my focus is helping 45- and 25-year-olds. I want to facilitate the way for them.”

In the same way, middle-age adults seek to mentor 20-somethings and those in kindergarten. Even teens and adolescents guide children who are barely able to read. After Life Church started emphasizing this concept, adults on the worship team personally mentored teens, including teaching them how to play an instrument or sing.

Today, 10- and 12-year-old musicians lead church-quality worship at Wednesday night services. An 11-year-old drummer fills in when needed at the Hispanic service. Such bottom-up ministry stems from Life Church devoting the bulk of its $2 million-plus annual budget to children’s education and programming.

“We realized if we train young people, we secure the future of the church,” Cere says. “We’re deeply engaged in developing kids; 75 percent of our campus is dedicated to young people’s Christian education. In most cases it’s the other way around.” 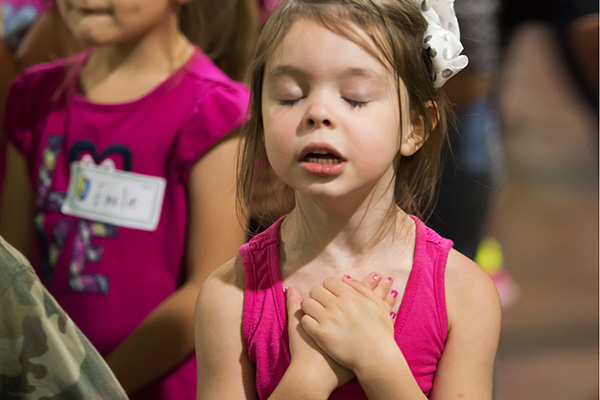 Indeed, Life Church’s mid-week program is so unusual it has attracted numerous visitors to the 20-acre campus, located about 45 miles south of Houston. They are particularly interested in how Life Church has attracted so many young people on Wednesdays. One secret is reaching out to transport students and other non-church members, who make up 60 percent of the participants.

They also serve a meal to everyone on campus, and offer outdoor play time before bringing the kids inside for a worship service and instruction. While the classes have as much to do with making the children good citizens as teaching them the Bible, many return on Sundays with their parents in tow.

“These kids go home and are so different they start changing the culture of their home,” says Cere. “We have lots of salvations (400 annually) here. I can’t tell you how many parents came to make sure we weren’t doing something weird because their children were so different.”

Rather than trying to follow a particular pattern, the longtime Foursquare leader says the secret of creating a vibrant church is listening to the One who founded it.

“Jesus made it clear that the church should be focused not only on adults who are childlike, but children who can do the work of ministry,” Cere says. “Listen to God concerning the shape of your church. It’s a little different for everybody.”