As Myanmar’s emergence from a repressive past unfolds, the church is growing despite lingering human and spiritual opposition.

This move is the latest evidence of overt persecution lessening. Even so, in recent years several Foursquare ministers have faced arrest and imprisonment. Charges against them were eventually dropped, but low-key resistance to the gospel remains a challenge to Foursquare’s encouraging growth, notably in the eastern Shan State.

A “milder persecution” has arisen there, reports Jason (last name withheld for security reasons), Foursquare Missions International’s (FMI) area missionary to South Asia. “There’s less freedom to travel either into new areas for evangelism, or out of other places to attend in-service leadership training or to evangelize,” he adds.

Yet the gospel is still advancing. Foursquare workers are more than halfway to their goal of 150 churches in the Shan region, part of the notorious “Golden Triangle.” Including neighboring nations, such as Thailand, the area accounts for much of the world’s heroin and opium production.

While these drug harvests were mostly exported for many years, recently some drug lords have been cultivating a local market. “The youth are really being hit hard, with some villages reporting half of the youth using drugs,” Jason says. 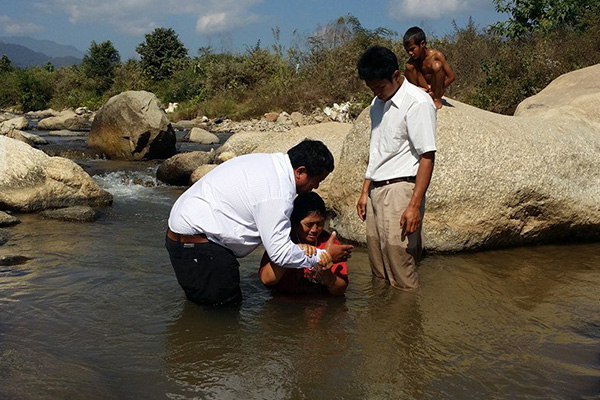 Meanwhile, Foursquare’s ministry has spilled over into a nearby nation (withheld for security reasons), with more than a dozen families across the border coming to Christ through visiting evangelists. When that nation’s authorities attempted to clamp down, Foursquare workers built a small church on the Myanmar side to serve the new believers.

Despite official and cultural resistance, the challenge ultimately is “heavy spiritual opposition,” especially among the area’s home to the Burmar, the majority people group who gave the country its former name, Burma. “There is noticeably less effective power for preaching and the supernatural,” Jason says.

The opposite is true among the Shan’s ethnic minorities, where “there is greater freedom for the Spirit to move.” Jason attributes that to two things: Buddhism does not have as strong a foothold, and some people in the area speak of an old prophecy about a visitor coming with a sacred book for them to follow.

Additionally, one sign of God’s hand on the work in Myanmar is tensions fading between different groups in the country’s small Christian population. Foursquare has assisted in that, with two district leaders helping train others with the interdenominational Alpha discipleship program.

Among the Foursquare Alpha course newcomers is a former animist priest recently touched through prayer. He came to Christ as a result, and Jason is sure that he will be a great influence in his community. Jason says: “Maybe he’ll be a pastor, like other former animist priests who have come to Jesus.”

Train to Become a Missionary