The year was 1938, and doctors told my parents there was no hope. I was 16, and the medical prognosis gave me only a short time to live due to one kidney that had never properly developed and another kidney that was filled with infection.

It must have been awful for them to watch their only child dying in front of their eyes. My father suffered chronic lung disease as a result of earlier war injuries, and now this. I was in bad shape, and we all knew the doctors were right. My joints were stiff and swollen, my body was bloated, and I could hardly see.

We never were a churchgoing family in our hometown of Toledo, Ohio, but Mother knew enough about spiritual things to know that I needed to be ready to die. She scanned the newspaper ads on Saturday, searching for a local church with a pastor who could prepare me for what lie ahead.

One ad jumped out at her that announced the opening of a new Foursquare church in Toledo. In one corner of the ad were the words, “Jesus Saves!” and in the other corner the words, “Jesus Heals!” “This looks like a church that could help us,” Mother said.

I was much too sick to get out of bed and had a fever of 104 degrees, but they bundled me up and drove me to the new Foursquare church. When we arrived, the little storefront was unimpressive and uninviting. Mother almost changed her mind, and considered turning around and going home. The words “Jesus heals” must have influenced her decision to stay and take me inside.

A woman preacher who had been sent to Toledo by the evangelist Aimee Semple McPherson preached that night on the text from Hebrews 13:8, “Jesus Christ is the same yesterday, today, and forever” (NKJV). She insisted that the same Jesus who healed in biblical times was alive today and able to heal every disease.

After the sermon, the lady preacher prayed for anyone who wanted to be healed. When it came my turn to be prayed for, she explained to us that she could not heal me and that Jesus was the only one who could. Then she prayed for me in what I thought at the time was much too short a prayer for the seriousness of the situation.

I felt a sensation like an electrical shock run through my body. Almost immediately my symptoms began to dissipate, and my parents took me home. My temperature was normal, and my swelling went down.

I was to be admitted to the hospital the next week, and I’m sure the doctors there planned to make me as comfortable as possible while I succumbed to my disease. Previous X-rays explained the symptoms I had been suffering, and the doctors were stunned to see me at the hospital symptom-free.

Doctors ran a new set of X-rays that now showed two perfectly healthy, normally developed, kidneys. They gathered around my hospital bed and announced that they had just witnessed an unexplained miracle. God had performed a creative miracle in my body, and medical science had no other explanation.

It wasn’t long before word spread among our friends and neighbors, and many people came to Christ because of the life-saving miracle. My father was healed of the lung disease that had plagued him, and he too accepted Christ.

The gratitude in my heart for God’s salvation and healing resulted in me dedicating my entire life to Him. Like a freeze frame from a movie, I vividly recall the day I was filled with the Holy Spirit and spoke with tongues. A gentle breeze wafted through my bedroom window as I knelt beside my bed in prayer. My chenille bedspread was the altar where the Lord asked me if I would be His servant, His missionary to the world. I said yes and have never regretted the decision.

After I graduated from high school, my parents put me on a train bound for Los Angeles and L.I.F.E. Bible College (now called Life Pacific College). I had worked during the summer to earn money for my travel, and finally made my way out west. When I finally arrived at Los Angeles Union Station and stepped off the train, I was surprised to hear two women calling my name.

One of the women, Audrey, was familiar to me because I had met her at summer camp. The other woman was a complete stranger but told me she was led by the Lord to pick me up at the station. Her name was Mildred Holcom, and she was the registrar at the college. Mildred drove a red Ford convertible with white upholstery, and I felt like a celebrity riding in her backseat for the short drive from the train station to Angelus Temple. 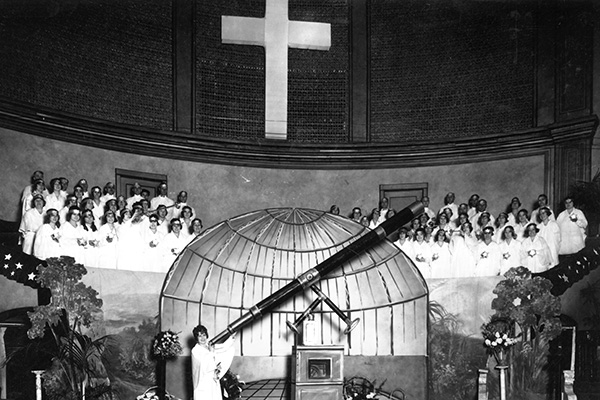 While a student at L.I.F.E., I served as part of the “illustration group” with Sister McPherson. Some people painted the sets for her spectacular illustrated sermons, and others worked with the music, but I was one of the actors who helped bring her sermons to life.

Sister often cast me as an angel. Another student, named Elmer, often played the role of the devil in her sermons, and the two of us had great fun acting out the sermons Sister would preach. Some time later, Sister McPherson performed the wedding ceremony when Elmer and I got married. She whispered to Elmer and me that she never thought she would perform a ceremony in which she married an angel and the devil.

One of the reasons Elmer and I knew we were compatible was that we shared a similar calling to ministry. I put on my application for Bible college that I was called to Panama, and Elmer put on his application that he was called to Spanish-speaking people. We were in our first pastorate in Corning, Calif., when we received a call from Angelus Temple that Sister McPherson wanted to talk with us about going to Panama.

During that conversation at Angelus Temple, Sister McPherson laid her hands on Elmer and me, commissioning us in prayer. She prayed the Lord would bless us as we took the Foursquare Gospel to Panama and other parts of the world. It was a prophetic word over our lives. We had fruitful ministry in the U.S. and also in Panama, Australia, New Guinea, England and throughout the United Kingdom.

I will never forget the move of God during the Charismatic Renewal as we ministered to packed houses at Royal Albert Hall and Hyde Park in London. Someone once introduced me as a leader in the charismatic movement, and I remember feeling embarrassed at the title.

Sister McPherson always taught us that the body of Christ extends well beyond any denomination or movement and that we must never take any of the glory for ourselves. She always redirected praise to the Lord, and I am thankful she taught Elmer and me to do the same. She told us once that she didn’t do it to be nice, but rather out of the fear of the Lord.

God used Sister McPherson to bring people to Christ and to prepare these young disciples for ministry. My life was spared and made whole by the grace of God and the obedience of one of Sister’s disciples in Toledo who recognized that only Jesus could heal me.

I am 93 now, and everything about my life has always revolved around the calling I received from God to go into all the world and preach the gospel, willing to make a one-way trip if that’s what it takes to see people saved and rescued from sin.

123
SHARES
ShareTweetEmail
Jean Darnall is an ordained Foursquare minister who served many years as a missionary, international evangelist, pastor and author.
Advertisement