I was 8 years old the first time I heard Aimee Semple McPherson preach. She stood on the platform of Angelus Temple, dressed in rags, and told the audience she was like Cinderella, poor and lost before she received Christ as her Savior. 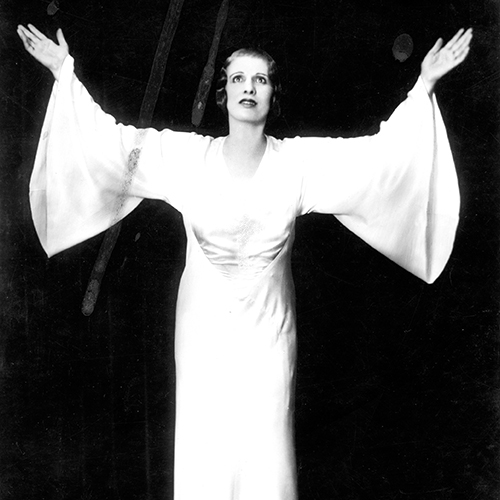 Aimee Semple McPherson used the Cinderella story to relate how Jesus takes us from a life of rags and tears to a life of royalty and hope.

Behind her a large, white cross appeared that reminded her of her “prince.” She said that Jesus purchased her salvation on the cross, and that now she could be dressed in robes of righteousness. Suddenly, a billow of smoke surrounded Sister McPherson. When it cleared, she was dressed in a gleaming white satin gown. Decades later, I still remember that moment like it was yesterday.

Seven years later, my family moved to Pasadena, Calif., and lived one block from Pasadena Foursquare Church. My sister and I played in a newly formed church orchestra, and enjoyed feeling like we were part of something much larger than our own lives. Still, it would take a few years before I fully devoted my life to Christ.

Two of Sister McPherson’s students from L.I.F.E. Bible College (now called Life Pacific College) were the directors of the orchestra. One of them invited me to play in a 100-member accordion band for a service at Angelus Temple.

Just before the performance, I had my second encounter with Sister McPherson. She stopped by the rehearsal room and spoke with each of us, thanking us for playing in the service. I was impressed with her sincerity and kindness, and knew I had to become a minister like her. I just didn’t know how.

I will still in my teens when World War II was upon us with curfews, air raid sirens and blackouts as a typical part of our lives. During an evening service in Pasadena, our senior pastor, Dr. Nathaniel M. Van Cleave, was preaching when an air raid siren sounded. It was an eerie way to call repentant people to the altar, but that’s just what he did. With every light in the church doused, he used a small flashlight to illuminate the way to the front of the church.

The night I made my way to the altar, there were no sirens, and the lights were on in the sanctuary. I poured out my heart to God, asking His forgiveness for sin and dedicating my life to Him for Christian service.

When I opened my eyes, I saw puddles of tears that had gathered on the altar railing. The entire youth group huddled around me, rededicating their lives to Christ. Some had grown cold in their faith, and we were all crying out to God for the fullness of His Spirit. My younger sister and brother accepted the Lord that night, and it was the beginning of revival in our church and in our family.

Dr. Van Cleave encouraged me to attend L.I.F.E. and prepare myself for a lifetime of ministry. I worked with young people at our church and took correspondence courses through the college until I was able to live in the dormitories and attend classes in person. I was fortunate to have teachers such as Sister McPherson who knew how to communicate the Bible so well. She taught us how to illustrate any Bible passage with dramatic flair and in a practical way that would attract people to the gospel.

Unfortunately, I also recall vividly the day Sister McPherson passed away. I was at work, and a co-worker just couldn’t wait to tell me she had died in Oakland, Calif.

I couldn’t believe she was really gone. Then, I remembered seeing her the Sunday before, walking up and down the aisles of Angelus Temple, praying aloud for each person in her congregation. It was almost like a premonition that this might be her final Sunday as their pastor.

Thousands of people—supporters and enemies—lined up for blocks to get one last glimpse of Sister McPherson as she lay in state on the Angelus Temple platform where she had brought the gospel to life. I attended her funeral, and watched as the pallbearers heaved and struggled to carry the bronze casket up the hillside at Forest Lawn Memorial Park, where she was to be buried.

The ministry established by Sister McPherson helped shaped my life and future. I accepted Christ in a Foursquare church, received my calling at a Foursquare altar, met my future wife at a Foursquare youth camp, and married her with the blessing of a Foursquare pastor and in his church.

More than a Cinderella life, I can honestly say it all started when I heard the gospel and responded by giving my heart to Christ.

This article is adapted from a video interview recorded on March 5, 2004, in Hemet, Calif.
ShareTweetEmail
Fred Dagne is a former L.I.F.E Bible College student who learned directly from Aimee Semple McPherson.
Advertisement