When a national tragedy begins to fade from the headlines, the long-term work of bringing healing to those affected is only just beginning, as Foursquare ministers and members in Roseburg, Ore., are all too well aware. 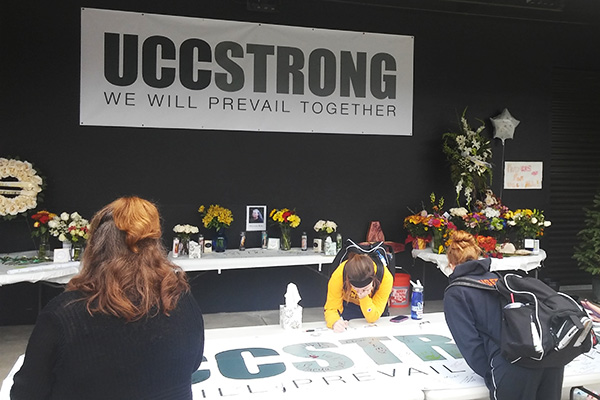 As the Roseburg, Ore., community grieves in the aftermath of a recent shooting, Foursquare pastors are providing counseling, care and room to mourn.

With shock giving way to grief and anger in the aftermath of the mass shooting at Umpqua Community College, where nine staff and students were killed before the gunman shot himself dead on Oct. 1, churches are rallying to offer peace and comfort in a small-town community where almost everyone knows someone connected to the incident.

Foursquare ministers and members have had an integral role in the response from the start, from meeting with survivors of the attack immediately after and counseling some of those caught up directly in the events, to providing opportunities for people to grieve and training others to give care in the days ahead.

As they continue to minister to those in need, they have appealed for prayer support from others in the Foursquare family, to empower them to continue to bring God’s light into Roseburg’s dark days through what Jerry Smart, senior pastor of Foursquare Gospel Center (Winston Foursquare Church) in neighboring Winston, Ore., calls the “ministry of presence.” That means being available as God’s people to simply listen, to speak words of hope and comfort, and to pray as the opportunity arises.

“The whole community feels violated,” says Jerry, who was one of the first ministers to arrive at the fairgrounds in Roseburg to which students and staff were bussed from the campus on the day of the shooting. One woman “literally fell apart in my arms, sobbing from a deep place in her heart,” Jerry recalls of his hours at the rendezvous site for families. “When she was finally able to compose herself, she told me that a friend had died in her arms. She looked up at me and said, ‘Why would God let this happen?'” 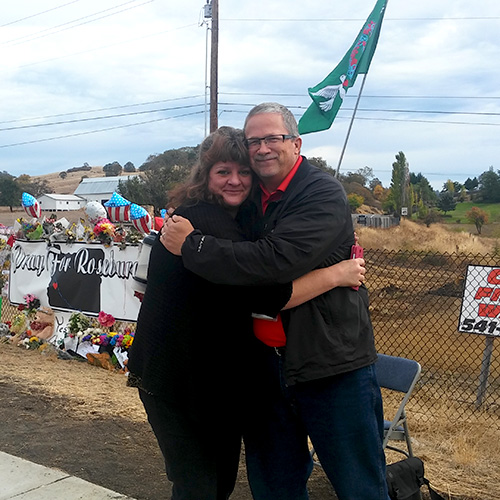 FDR chaplains and local church staff served side by side at memorials.

A member of the Douglas County Evangelical Fellowship, Jerry has been closely involved in the coordinated response from local churches in the days since. He helped organize and lead a memorial service held in a local park, while his church is also partnering with civic leaders to present two training sessions open to the public on dealing with grief.

Meanwhile, the Foursquare congregation closest to the scene of the shootings has also been centrally involved in reaching out to the community. New Life Christian Center (Roseburg Foursquare Church), pastored by Tim Powlison and just five miles from the college, hosted a series of nightly vigils giving people somewhere to gather and grieve, and served as the hub for Foursquare Disaster Relief‘s (FDR) first-response team.

Ten trained FDR first responders were deployed to Roseburg for several days, helping with pastoral care in the community and supporting New Life staff and leaders as they prepared for ongoing ministry to people impacted by the shootings. FDR team members joined other pastoral care volunteers on the Umpqua campus, as students returned, to be available to counsel and pray, and participated in a memorial service there. They also went out into the local community to meet with people and offer a listening ear, and provided training on grief care to members of New Life.

Ministry in the light of violence such as the kind that rocked Roseburg requires particular sensitivity to the leading of the Holy Spirit, says Trudy Cane, who led the FDR team. Trudy, a Foursquare credentialed minister, is also a police and fire department chaplain, and serves as FDR’s U.S. disaster relief training coordinator.

While natural disasters provide opportunities to offer practical help, and those affected have rebuilding ahead of them, tragedies that are the result of evil actions often leave people confused and fearful as they try to establish a “new normal,” explains Trudy.

“Because it is a tight-knit community,” Trudy says, “they are going to be looking to their own, which is New Life, so they will be depending on them. So [New Life members] are going to need prayer support for wisdom, for endurance and perseverance, and boldness, to take advantage of the opportunity that the Lord has put there.”

Jerry underscores the importance of spiritual strength for those ministering in the days ahead. “Hearing story after story of what happened is overwhelming,” he says. But the need and opportunity are big: “From what I have seen, this kind of thing makes people run to God or run from God,” Jerry states. “They either embrace the Lord or they hate Him.”

The Roseburg shooting marked the third time an FDR emergency response team has been deployed in the U.S. in the past few weeks. Previous teams were sent to help communities affected by wildfires in Washington and California.

Prayer support from the Foursquare family is crucial at this time. Trudy asks Foursquare members to pray for “a breakthrough in the heavy atmosphere, for boldness in the Holy Spirit, and that the joy of the Lord would be the strength of those ministering, to sustain them—that they will go out into the community with a message of hope and encouragement.” Jerry requests prayer for “ongoing church unity, which has been an important element of the united response so far.”