Leslie Keegel’s appointment as chair of the Foursquare Global Council is celebrated as a major milestone in the movement’s history because it is the first time an international member is chairing this eldering body.

The long-serving national leader of Foursquare in Sri Lanka, Leslie is widely known and respected for championing church growth through Spirit-empowered ministry and for having brought key prophetic words to past Foursquare Connection meetings. He received the symbolic global leadership baton at this year’s gathering in Washington, D.C.

As Foursquare President Glenn Burris Jr. presented the baton, regional leaders encircled Leslie and his wife, Belen, to pray for them and anoint them with oil. Glenn stated that he welcomed this “historic day,” and also said that he believed the appointment will “take us places we have never seen before because of the release of this ministry.”

The succession is being seen as a powerful and even prophetic expression of Foursquare’s Four-Stage Model for its work in establishing new ministry around the world—pioneering, establishing, empowering and then sending. Acknowledging the apostolic leadership that is prominent in other parts of the world outside the U.S., Glenn told those at Connection 2017 that the role of the U.S. Church has changed from that of “parent to partner.” Through mutual collaboration and unity, we are empowered as a global family, praying for and endorsing one another across the globe.

Since Leslie was appointed Foursquare national leader of Sri Lanka in 1983, our movement there has grown to some 1,600 churches and meeting places. That growth has not come without opposition and cost: 20 Foursquare leaders have been martyred for their faith. The significance of the impact of our Foursquare Sri Lanka family is also seen in the fact that Sri Lankans now lead four other national Foursquare works: in New Zealand, the UK, and two other nations unnamed due to security considerations.

Thanking Glenn for his “exemplary leadership” and mentorship, Leslie says that he has taken the role as the chair “trusting in the Lord and completely yielding to the Holy Spirit.” In speaking about Glenn and Ted Vail, the director of Foursquare Missions International (FMI), he states that they “will work closely with me to help me steer this big ship.” He also notes that “the support of my friends from the regions and nations is amazing and enormous.”

In his new role, Leslie will head the 21-strong group, comprised of regional and other leaders, overseeing some 100,000-plus churches in over 155 nations. Meeting in person at least once a year, with quarterly conference calls, continual communication, and with active committee teams, the Global Council is charged with guarding and guiding Foursquare’s work around the world.

In addition to an Executive Committee (serving as the Steering Committee), the Global Council offers direction and oversight through three pro-active ministry-focused committees: Functional Structures, Shared Mission, and Training and Education. Other committees of importance are the Financial Committee, the Intervention Committee and the Women’s Committee, comprised of representatives from each of the 15 regions. Discussions and decisions are centered on holding true to Foursquare’s six Global Distinctives: kingdom partnerships with other groups, a commitment to sound doctrine, empowering people for leadership, strong family relationships, and an emphasis on Spirit-empowered living and disciple-making. 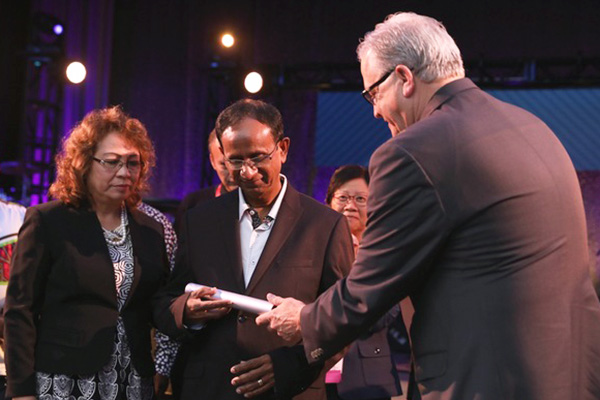 Passing the baton at Foursquare Connection 2017

“Never has it been more important in the history of the church to network and partner to finish the Great Commission,” says Glenn Burris Jr. “People are going everywhere as a result of a variety of circumstances, such as job changes, immigration or becoming refugees, and it is a divine intersection of mission and opportunity. It really has to be the whole church taking the whole gospel to the whole world.”

Looking ahead, Leslie speaks of hopes for a global 24/7 prayer chain, and encouraging prayer and Spirit-filled life and ministry in every national church. “We must see more and more the preaching of the Word being confirmed by signs, wonders and miracles,” he asserts.

Among his requests for prayer as he begins his new role is his earnest prayer that he might receive “anointing and wisdom to see as God would want me to see, and boldness and faith to be decisive in taking the global family forward.” He also prays for national leaders to know an increased “heartfelt passion and God-given vision to pray passionately and lead decisively.”

He also urges prayer and fasting for those who are undergoing persecution. “In many parts of the world, Christians are being martyred for their faith,” he says. “Many are being thrown out of their homes, families and clans. Children are denied schooling, men and women lose the opportunity of employment.”

Glenn adds: “This baton relay in global leadership represents the pinnacle of the missiology of Scripture. We have, in the ethos of our movement, the early church conviction of empowerment. Leslie Keegel has demonstrated a unique apostolic mantle across cultures, continents and churches. God’s grace and favor rests on his life. He is powerfully anointed to confront the kingdom of darkness, to model leading with Holy Spirit power and in the prophetic, and he leads with such humility and grace. The Global Foursquare Church is poised to be a significant part of God’s plan to reach every corner of the world with the good news of the gospel of salvation, redemption, healing and hope.”