We found the old radio receiver after my father passed away and my mother was selling the family home. He bought the radio for her in 1925, when she was pregnant with me, so she could listen to Aimee Semple McPherson preach.

My grandparents were staunch supporters of Sister McPherson from the beginning of her appearance in Los Angeles, but my mother had to be won over to the “Pentecostal experience,” as they called it. After she was baptized with the Holy Spirit, there was no turning back.

The family attended one of the Foursquare “branch churches” (today we call them church plants) in Pasadena, Calif. I remember sitting on my grandfather’s lap during a Sunday evening service, wrestling just a bit as he tried to get me to go to sleep. Grandfather held me tightly and put his massive hand across my little face so I would close my eyes. I sat still so he thought I was sleeping and watched the goings-on through the gaps between his fingers.

On the platform of the little church, a lady minister dressed like Sister McPherson led the congregation in singing, clapping and shouting. The lady wore the same white uniform and wide black tie that Sister McPherson wore, but this lady wasn’t Sister. Some called these women “Aimee-ites,” which probably wasn’t very nice, but they did look and act a lot like Sister.

My mother almost single-handedly established the Foursquare movement in our neighborhood. She felt indebted to the ministry Sister McPherson founded and wanted others to encounter the same faith she had experienced. As I grew up and heard the stories about times before I was born, I began to understand why Foursquare mattered so much to my mother, and why that old radio had been so important. 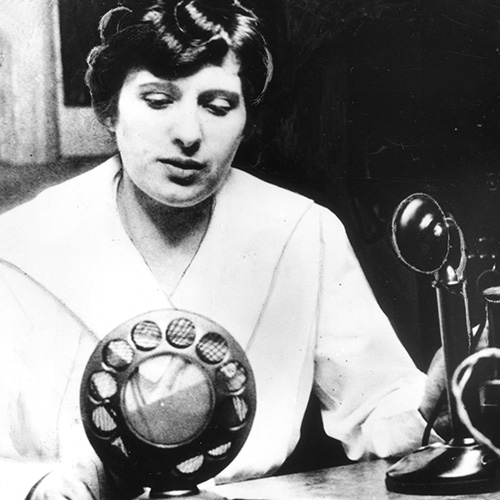 It looked nothing like radios I recognized and had several glass tubes sitting openly on top of a dark mahogany base. Three large black dials had to be tuned in manually to receive one of the few radio stations in Los Angeles, such as KFSG, owned and operated at that time by The Foursquare Church. The mahogany radio eventually was replaced in our home by a newer, sleeker model, and the old radio found its way into the attic. I saw it there years later, when as a teenager I got into some mischief.

Fortunately, the prayers of my mother and grandparents covered me even as my dad’s health deteriorated from ALS (Lou Gehrig’s disease). I was 15 when he died, and I wrestled with two options: to be mad at God or to serve God. I decided to serve God.

A few years later, I attended a Foursquare youth camp where young people from all over California gathered for one week each summer. I saw a cute young girl named Mary Lou from a little country town north of San Diego that I had never heard of, and told my buddies that I planned to marry her. We all laughed at the prospect, but after returning home I couldn’t get her out of my mind.

I was drafted and served in the U.S. Navy, stationed at North Island Naval Station in San Diego, and attended the San Diego Foursquare Church. A navy buddy who also attended the church reminded me that Mary Lou lived nearby in a town called Escondido and went to the Foursquare church there. The next weekend, we made the journey up old Highway 395—not much more than a wide cow path—to North San Diego County to find Mary Lou.

Foursquare matriarch Dr. Evelyn Thompson pastored the Escondido church in those days, and Mary Lou played the piano there. When my buddy and I arrived in Escondido the first time, the service was already underway, with Mary Lou playing and the congregation singing.

Dr. Thompson said years later she never heard Mary Lou miss a note on the piano until that day when she looked up and saw us two Navy boys in uniform standing in the church foyer. Mary Lou and I married soon after and attended L.I.F.E. Bible College (now called Life Pacific College) in preparation for what would become a 42-year run of pastoral ministry. It’s been a wonderful journey.

As I grew up and heard the stories about times before I was born, I began to understand why Foursquare mattered so much to my mother, and why that old radio had been so important.

Mom told me years ago I should sell the old radio. For some reason I just couldn’t do it. Mary Lou remembered her family in Escondido also listening to Sister McPherson preach over the radio, and we often wondered if we might have been gathered around the radio listening to the same sermons at the same time.

During a visit to the remodeled Parsonage of Aimee Semple McPherson and the Foursquare Heritage Center, we realized the radio belonged there as part of the heritage of The Foursquare Church. After all, it is a reminder of how our founder tapped into the budding technology of her day to reach the masses for the kingdom of God.

This particular radio was used by the Lord to help my mother through a challenging time in her life. Her faith and her prayers for me were no doubt inspired in part by the messages she heard coming out of the big horn speaker.

I’m 90 now, and have nothing but gratitude in my heart for the way God has guided my life and used me as a minister of the gospel. Somehow, I think this radio had a lot to do with the blessing in my life, and I hope it will inspire many other people to live for Jesus, too.

Jim Ritch is a retired Foursquare pastor and formerly served on The Foursquare Church board of directors. He donated his mother’s radio receiver to the Foursquare Heritage Center, where it is on display in the Parsonage of Aimee Semple McPherson.

ShareTweetEmail
Jim Ritch is a retired Foursquare pastor and formerly served on The Foursquare Church board of directors.
Advertisement