Maria Rose Adong and two of her children live at Camp Moyo in northern Uganda after they were forced to flee civil war in South Sudan. Her kids are malnourished and chronically hungry, even after a meal from United Nations relief supplies.

So, when a team of Foursquare pastors recently delivered flour, cooking oil, beans, salt and soap to 350 families (each with between 10 and 15 members) in the refugee camp, Maria saw it as a great act of mercy. So great that it touched her heart spiritually.

“After the action of these pastors, I knew that Christians with Christ-like compassion still exist,” says Maria, who describes herself as born again but backslidden. “At least, for the first time after so many months, we could eat and get satisfied. It gave us a taste of normal life.”

Maria’s story is one of many emerging from East Africa, where 20 million people live on the brink of starvation. The situation prompted The Foursquare Church to form Project Nourish this summer, with Foursquare Disaster Relief (FDR) implementing and overseeing the project. In addition to distributing food, FDR has handled assessments, planning, oversight, accountability and partnerships with other organizations.

This help is vital, according to John Kamanzi, national leader of The Foursquare Church in Uganda. He says the refugees there live in unexplainable misery.

“There’s so much need,” John says. “The relief we gave out may have been small, but it was significant. The beneficiaries got a message that cannot be erased in their minds: Jesus loves them, and the church cares.” 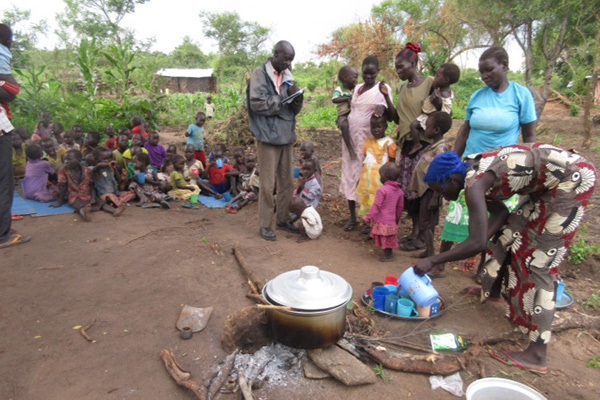 Not only did this action bring souls to Christ and give hopeless people hope, John says refugees learned that they don’t have to rely solely on the UN.

The misery spans half a dozen nations, with South Sudan, Yemen, Somalia and northern Nigeria directly facing famine. Uganda and Kenya are threatened by food shortages because of the strain of trying to cope with the flood of refugees from neighboring South Sudan, where civil war has raged since 2013.

The needy include thousands of Foursquare members, including many living at Uganda’s largest refugee camp, Bidi Bidi—temporarily home to 275,000 people—and others. Project Nourish has touched countless lives so far, feeding more than 25,000 people to date. People such as Mary Maria Taban, a 30-year-old widow. In addition to her five biological children, she is caring for seven others whose parents have died or been displaced by the war.

“I don’t know that any other organization apart from the UN could take the initiative of supporting us,” Mary says. “Foursquare’s generosity came as a great surprise. I am praising God for what FDR has done for me and my big family.”

Sometimes, the aid goes beyond the ordinary. Raacheal Ayela, who has been living at Camp Moyo for a year, recalls the extraordinary blessing for volunteers who helped the pastors distribute supplies. When the pastors asked how they could help volunteers in return, their children called out for fish. Angala, a delicacy in South Sudan, is expensive. So Raacheal was surprised when the pastors agreed to buy them fish for lunch.

One problem that goes on under the radar is pregnancy, a common occurrence in the camps. While giving birth can be a highly celebrated event, for parents not expecting additional mouths to feed it can be viewed as a curse, John Kamanzi says.

By God’s grace and the support of Foursquare relief aid, a mother who gave birth to twins in May is no longer fretting about how the family will survive. 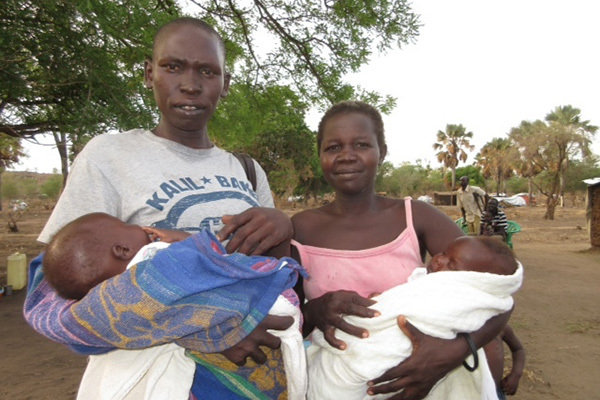 “We kept encouraging her and telling her that the God who feeds the birds in the air will take care of them,” John says. “Now the boys are healthy. We keep taking them powdered milk and soya porridge for the babies to be strong. We believe that, by God’s grace, they will grow healthy and strong.”

There are many other testimonies from the refugee camps:

“We thank God for using us, The Foursquare Church, to make an impact,” John says. “This is what Christianity should be all about: showing mercy to the needy.”