My family moved from San Francisco to Los Angeles in 1925 when I was just a baby. My parents were drawn to Los Angeles primarily to join the ministry of Aimee Semple McPherson.

One Sunday afternoon, when I was 5, my parents took the family to the beach instead of going to church at Angelus Temple. I suffered from kidney disease and diabetes, and told my mother that if we had gone to church, God would have healed me. They immediately packed up the car and headed home. After a quick sprucing up so we were presentable, my father raced back to the Temple, running through the front doors just as the service was about to conclude.

The man speaking that night was a medical doctor with a healing ministry. Just as he began to close the service, he stopped and said the Holy Spirit showed him a man who was running toward the altar with a little girl. He told the congregation to watch and pray, and in no time, my father and I came bounding down the aisle. The doctor’s prayer for my healing was simple and confident. It was enough, because I was healed instantly, and four specialists later confirmed that I no longer had either disease.

I wasn’t very old when Sister McPherson picked Miller Freeman and me to serve as “mascots” for the children’s ministry. We led the other children in worship and sometimes sat with Sister on the platform. A photo of us has become popular as people remember Sister’s ministry to children during the 1920s. I wore a little cape and uniform similar to Sister’s, and Miller wore a Scottish outfit complete with bagpipe.

Sister Hal Smith, my mother, was put in charge of the Angelus Temple City Sisters program that provided relief supplies, clothing and food throughout Southern California when disasters struck. Sometimes, people simply called for prayer for shut-ins who needed healing, and at other times, a family needed shelter after losing their home to fire.

Many in the day knew that the City Sisters would be the first relief agency to show up. Mother also managed the Angelus Temple Commissary that fed and clothed 1.5 million people during the Great Depression, serving the needs of more people than any government agency.

Sister asked Mother to teach a class on healing to prepare people to pray for the sick during divine healing services on Wednesday and Saturday afternoons. I saw thousands of people healed at Angelus Temple—some arriving in ambulances from local hospitals where doctors had given up. Healing happened everywhere, it was commonplace, and I am so thankful for the opportunity to have witnessed God at work throughout my life.

My mother was put in charge of the Angelus Temple City Sisters program that provided relief supplies, clothing and food throughout Southern California when disasters struck.

A group of us called “Club 99” invited visitors at our services to a sing-along at Sister’s parsonage next to Angelus Temple. We especially liked to welcome service members before they went off to war, and prayed for them to receive Christ as we offered them refreshments and fellowship.

A trio that I sang in ministered in music during the Sunday night service when Sister preached her final sermon in Angelus Temple. She hugged us and told us, “I sure wish I could take you girls with me to Oakland this week, but I know you have school.” It was the last time we saw Sister alive. She died in Oakland later that week. I was 19, and my adult life and ministry were just beginning when her life was over. It was a very difficult time.

A group of young men from the Northwest came to Angelus Temple to attend Bible college, and we enjoyed a sing-along with them at the parsonage. Among them was a young man named Paul Arthur, who would later become my husband. Later, Paul became youth pastor at Angelus Temple and worked out of an office on the second floor of the parsonage where he and I first met.

Growing up at Angelus Temple, ministry was my life. I played kazoo in the children’s “orchestra,” was vibraharpist with the youth choirs, and played in the accordion band. Later, I sang in trios and recorded solo albums with the great musician, arranger and accompanist Paul Mickelson.

Sister was a friend of my family’s and a mentor to me until her death when I was 19. I will always be grateful for the way the leaders of Angelus Temple guided me, and especially thankful for the many ways Sister invested her life in me.

ShareTweetStumbleuponEmail
Bettie Arthur Brown grew up at Angelus Temple and was involved with various ministries. Her husband, Paul Arthur, served as the church’s youth pastor.
Advertisement

Dedicated service to the people of South Africa 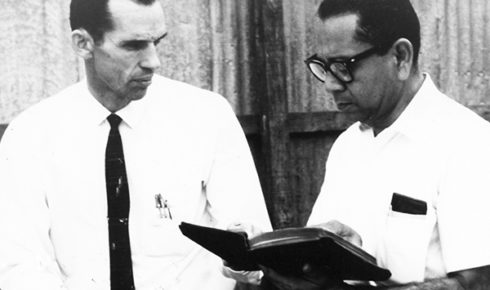 How Foursquare’s founder led to my being a Foursquare minister