God’s hand has been on my life from the day I was born 100 years ago, and I’m thankful and blessed for His presence and calling in my life. He has allowed me to preach the gospel, pastor churches, pray for people to be healed—and throw out the first pitch during a Cleveland Indians baseball game in celebration of my 100th birthday.

My grandson practiced with me and showed me how to throw the best pitch. Slider, the Indians mascot, gave me a big hug, and Nick Swisher, a team player, gave me a kiss. What a day!

At my tallest height I stood 4 feet 10 inches and have always felt self-conscious. I avoided assignments in school that required me to stand in front of the class or engage in discussions, and I gladly remained in the shadows while my older brother and two sisters took the limelight in our family.

After high school, I married Tom Eppler, and we started our new life together in Vermilion. I had heard stories about a Foursquare lady evangelist whose ministry was much like that of Aimee Semple McPherson. Out of curiosity more than anything, Tom and I drove to Toledo to listen to this lady preach and see why so many people were talking about her.

We took our seats before the service began and noticed that the evangelist was praying for a little boy who had a brace on his leg. Then, the boy and his mother found a place to sit, and we didn’t think much more about it. As the service progressed, we heard a small child crying aloud in pain. It was startling and disruptive.

Even the evangelist couldn’t continue with the service because of the intense sound. She asked what was the matter. From the middle of the audience, the boy’s mother called out: “It’s my son who is crying! His leg is growing, and the brace hurts him!” 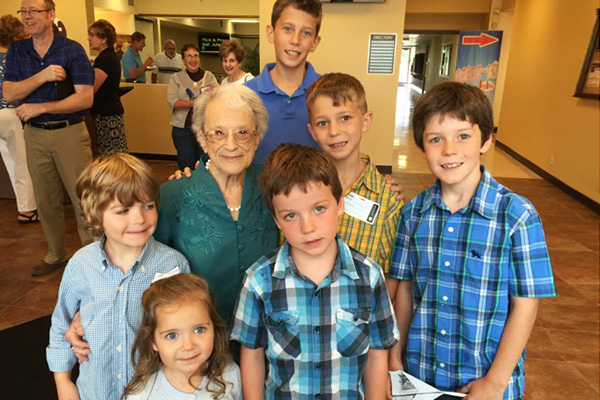 Of course, there was much excitement, and people rushed to help the boy. Many people were praising God, and others were astonished at the miracle we had just witnessed.

Personally experiencing this little boy’s physical healing assured me that Jesus Christ is alive. I knew I wanted a relationship with Him, and I committed my life to Christ that night. My husband came to Christ shortly after, and together we devoted our lives to Christian service.

I was invited to help lead the youth at the Vermilion Foursquare Church, and it was during that ministry assignment that I confronted my personal insecurities and preached my first sermon. What came out of my mouth was not the carefully written and rehearsed brief testimony that I had prepared, but rather a Holy Spirit-anointed message that garnered the affirmation of those in the congregation.

God confirmed to my heart that I could speak, and preach, in front of a crowd of people. Because of the success of this sermon, I responded to the call of God to enter L.I.F.E. Bible College (now called Life Pacific College), graduating in 1949.

Tom and I served the Lord together in Foursquare ministry until he went home to be with the Lord at age 92. During the 68 years we were married, Tom always supported God’s call on my life to the ministry.

I will never forget one particular Sunday evening service when my father responded to an altar call I gave. He walked to the front of the church and asked me to lead him in the salvation prayer. In my mind, this experience remains the biggest highlight of ministry. A few days later, Jesus called him to his home in heaven.

Becoming the senior pastor at the Foursquare church in my hometown was a stretch for me. I didn’t think I was tall enough to be a senior pastor, and my shyness was still a bit of an obstacle. However, with God’s calling also came His equipping.

To this day, I still have the God-given boldness that He gave me when I first pastored a church. I also found that God gave me great favor with the pastors in our local ministerial association, and they often invited me to be the speaker for our community gatherings.

God gave me boldness in prayer as well as preaching. Mrs. Thompson, a woman in our congregation, called one night and woke me out of a sound sleep to ask for prayer for her husband, Sam. He was gasping for air and unable to breathe. She was frightened and called me in her distress.

As I began to pray for him, I found myself experiencing the same symptoms as Sam, and thought I was dying as I gasped for air. It was frightening, but I knew I needed to persevere in prayer for this man’s life and healing. Following that horrific experience, Mrs. Thompson called again and told me her husband was breathing normally. Sam was healed.

I may be 100, but I still pray for people, teach a Sunday school class and occasionally preach a sermon, when I’m asked. And I really enjoyed being a Major League pitcher, even if it was just for one pitch. Thank God for His boldness that transformed this petite girl into a preacher of the Foursquare Gospel!