My name is Jesús Canet Peña, and I was born in La Lisa, Habana, Cuba, in 1984. My father was not around much, and my mother was an alcoholic. I constantly fought with my mother and older brother, and I ran away from home multiple times—as early as age 4—and was always brought back home again. 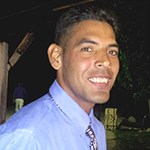 As a teen I became more rebellious, and would often get into trouble with my mother, older brother, school officials and sometimes even the law. I never finished school, and continued to run away from home. I would ride the bus all night so as to have a place to sleep, crawling into the backseat to hide from the driver.

I wasn’t only running away from an abusive, alcoholic mother; I was also trying to escape a very rough neighborhood. I became a very astute “businessman” at an early age, washing cars, cleaning yards and making “shady deals.” At one point, I was put into a reformatory school for delinquent youth. But I ran away from it to the southern provinces to find some relatives, with whom I lived for about 10 days.

Returning to the city, I found myself, at the age of 14, sleeping in a giant clay pot at the entrance to a public park. I lived there for three years, bathing in the park’s bathroom and washing my few pieces of clothing there, as well.

On Feb. 8, 2001, I met some members from the Managua Foursquare Church when they visited the park. They invited me to a church service in the park. I was 17 at that time.

I felt the love of the people and heard the message of salvation. I was impacted by the presence of God and the Spirit of God on the preacher speaking out of Matt. 11:28: “Come to me, all who labor and are heavy laden, and I will give you rest” (NKJV). I needed rest, and I found it at the feet of Jesus Christ.

I was encouraged by the pastors to stay with the church and to finish school, which I did. God also miraculously provided the funds, through a family in the church, for me to have surgery on my mouth and jaw. The surgery was complicated by staph infection.

A couple living close to the church took pity on me, and took me in to stay with them for several days. Elida Gonzalez and Ibrain Ramirez were not Christians themselves at the time. As I shared the gospel and my testimony with them, they both received Jesus Christ. Presently, Elida is the treasurer and a member of Foursquare Cuba’s national church board.

I’m 28 now, and I’m one of the worship leaders and songwriters at the Managua Foursquare Church. I am very thankful to the Lord for watching over me all the years before, and for allowing me to be a part of all the wonderful things that God is doing through the work of The Foursquare Church in Cuba.