The president of The Foursquare Church is to serve a second term, continuing to lead the more than 6,600 U.S. credentialed ministers through a season of major change.

Glenn Burris Jr. was ratified Tuesday, May 27, 2014, in a historic vote at the denomination’s annual convention, the first giving qualified absentee voters a voice in choosing their next leader. Glenn will officially begin his next five-year term Sept. 1, 2015, which will end Aug. 31, 2020.

More than 1,300 voting ministers and delegates onsite at Foursquare Connection 2014 this week, taking place in Dallas through May 29, and 731 credentialed ministers who returned absentee ballots, voted to ratify Glenn to continue in his role for another five years, precluding the nomination and selection of a new president. According to Foursquare bylaws, 75 percent of the votes cast is required in order for the president to be ratified.

“It’s very humbling to serve you at any level. … Thank you for your trust and confidence,” Glenn told the convention body upon accepting the ratification, before three former Foursquare presidents—Jack Hayford, Paul Risser and Harold Helms—prayed for Glenn, anointing him with oil. “What a great future The Foursquare Church has,” he said, referencing the Reimagining of Foursquare discussed throughout this year’s convention.

“I take the responsibilities of the president’s office very seriously, and I will continue to strive for excellence in serving The Foursquare Church and God’s kingdom,” Glenn said in a statement.

The appointment is being widely welcomed within the denomination as an important decision at a time of transition. Foursquare is in the midst of significant organizational changes intended to better position its churches and members for more effective ministry.

Glenn, who has served in various ministry roles with Foursquare since his first appointment in 1976, has earned widespread appreciation for the way he has headed the Reimagine Foursquare process, a reevaluation unparalleled in the movement’s 91-year history. His collaborative leadership approach has been welcomed as national and local leaders, as well as lay members, have been involved in prayer, research and discussion on issues related to church organization, government and practice.

The comprehensive review has included a series of more than 20 nationwide Town Hall meetings and the convening of Task Groups focusing on areas such as governance, resources and mission.

Proposals for realignment organizationally, financially, structurally and pastorally are being presented at this week’s gathering in Dallas, with further research and discussion to follow as changes are implemented. More than 3,000 people from across the U.S. and overseas have gathered in Dallas under the theme, “Multiply.”

Corporate Secretary Sterling Brackett, whose office handled the absentee ratification voting, says that the new process went smoothly and that he looks forward to continuing to enable more ministers to be a part of the presidential selection.

A graduate of Mount Vernon Bible College in Mount Vernon, Ohio, Glenn served as a youth pastor and senior pastor before taking on district and national leadership roles. He became supervisor of Foursquare’s historic Southeast District in 1992, and 10 years later was appointed general supervisor of the U.S. national church.

Glenn and his wife, Debbie, have two adult children, two grandchildren and a third grandchild on the way this summer.

As president, Glenn leads a denomination with around 1,700 churches and 7,000 credentialed ministers in the U.S. Globally, there are more than 7.5 million Foursquare members in 136 countries, around 99,000 licensed ministers, and more than 68,000 churches and meeting places.

Officially named the International Church of the Foursquare Gospel, The Foursquare Church was founded in 1923 by Aimee Semple McPherson. A pioneering evangelist, she opened the historic Angelus Temple in Los Angeles and was known for her creative use of media in ministry.

A Pentecostal movement, Foursquare draws its name from what members embrace as the essential four-fold ministries of Jesus: Savior, Baptizer With the Holy Spirit, Healer, and Soon-Coming King.

By: Andy Butcher, a freelance writer in the Orlando, Fla., area 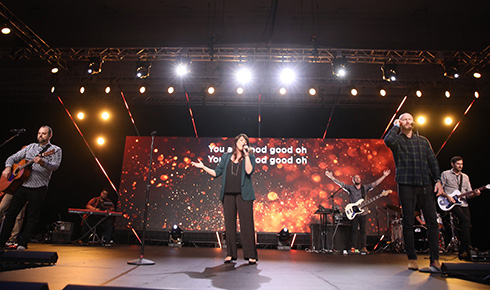