What was once a quiet, coastal town has become a multibillion-dollar destination spot with the advent of the 2014 Winter Olympics in Sochi, Russia. While athletes from around the world have gathered to compete, missionaries from all denominations have also come to Sochi—known as “the Gateway to the Future”—for the Games. But they have arrived to win something very different: They have come to introduce people to Jesus in positive, life-giving ways.

The Foursquare Church has joined in this mission, with Foursquare Missions International (FMI) Missionaries Steve and Kim Cecil and local leaders planning non-traditional outreach opportunities for their city. Due to the influx of people, there won’t be any traditional outreach events. Instead, the Cecils and local pastors Slava and Svetlana Naniyants of Love of Christ Foursquare Church in Sochi are changing lives one conversation at a time.

“The Lord is doing something new here in Russia,” says Kim Cecil, who arrived in Sochi in Aug. 2013 as a long-term missionary with her husband and three children.

She explains that once the Iron Curtain fell in the late 1980s, the once-communist country experienced an immediate influx of missionaries. But once Christianity began to take root in Russian soil, this fervor died and missionaries began to relocate back to their U.S. homes or other mission fields. 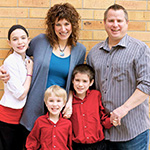 “Many young believers felt abandoned by their Western friends as more and more of them left,” Kim explains. But the Cecil family hopes to reverse that trend. They plan to stay in Russia long term and are working with Russian pastors to build a strong foundation in Christ that will last for generations.

It is no coincidence then that this season’s Olympic Games provide opportunities for healthy leader development, church growth and reaching the nations from one city hub.

“We plan on attending several events, including the U.S.A./Russia hockey game, and participating in evangelism whenever we can,” says Kim. She and Steve have already purchased their hockey game tickets.

Also, in partnership with Love of Christ Foursquare Church in Sochi, Kim taught free English classes for service industry workers to prepare them for interacting with the Olympic Games’ international crowd. In the past four months, 25 students have come through the church doors for lessons, and the Cecils have developed authentic relationships and found opportunities share the gospel.

Even as the Cecils and the Naniyantses share God’s love throughout the Olympics season, they maintain post-Games plans.

“Our goal is to help establish healthy Foursquare churches,” Steve affirms. “Part of accomplishing this task is to translate, in the Russian language, Foursquare resources that truly emphasize our theology, our values and our mission.” Their first translated resource is The Holy Spirit, a short, compelling book by Jerry Cook.

Although fellow Christians can partner financially with the Cecils to fund church development and translation costs, Steve and Kim ask first for prayer.

“The eyes of the world are on Sochi,” says Steve of the Olympic impact. “What we are really praying for and hoping for is that the believers [around] our world would get a heart for this country.”

Kim agrees. “God is using this,” she says, “to raise up people all around the world to intercede for this beautiful nation.”

Jeff Roper confirms this hope and explains how leaders can pray: “Let’s pray The Foursquare Church will shine brightly throughout this nation and that many will come to know Jesus Christ.”

It has already begun. The Foursquare Church in Russia, led by Foursquare National Leader Alexander Pashchenko, has become a spiritual force. New churches are being planted. Rehabilitation centers are opening, and ministries to individuals with disabilities are developing.

“The Foursquare churches here,” Kim says, “are determined to show the love of Christ in real and meaningful ways.”

As the Olympics progress this month, we ask you to intercede on behalf of this nation. Pray that Christians will have opportunities for one-on-one evangelism, and ask God to use His people to reach even those who seem unreachable. Then consider how you can give financially to further the Cecils’ work, and partner with their family.

Foursquare Missions International also invites people to pray about joining a short-term missions team or becoming a long-term missionary in this ethnically diverse and geographically expansive nation. Read more on FMI’s website to learn how to join a team.

By: Allyson Siwajian, content coordinator for The Foursquare Church and regular contributor to Foursquare Leader magazine and foursquare.org