As part of the Bible belt, Texas may not be the first place that comes to mind as needing more churches. But then comes Austin—the live music capital of the state and the world—which proudly wears its independent, alternative heart on its sleeve. The favorite bumper sticker around: “Keep Austin Weird.” 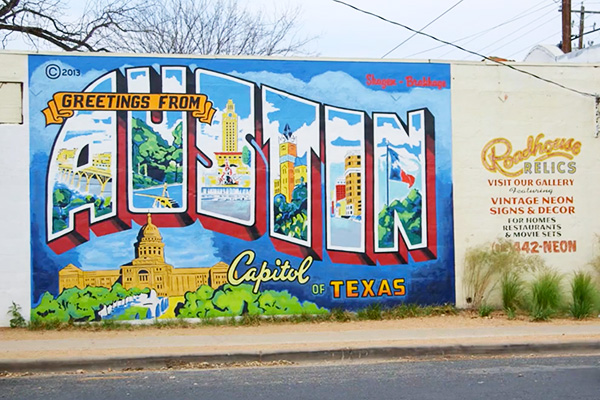 Only one in ten Austin locals currently attend church.

Only one in four of the city’s near-million population identify as Christian, and most of them have little time for what they have known of church: just one in ten Austinites attend. That’s why the city is one of the targets of Foursquare’s new Global Cities Strategy, which is 100 percent funded by Foursquare Foundation. The initiative was announced at Foursquare Connection 2014 in Dallas.

The city’s unique vibe is why the public face of the Mission congregation (Austin North Mission Church) that church planter Ezra Stanton is establishing is going to be a forthcoming coffee shop, a place to get to know people and form relationships. It’s part of a deliberate go-slow approach recognizing that Austin’s different culture requires a different approach.

“We want to be students of the city,” says Ezra, who arrived earlier this year from Beaverton Foursquare Church in Beaverton, Ore., where he was high school pastor and young adults director. “We want to be people that step back and learn, to find out what people want and how we can meet that,” he says of the team of around 18 that he leads. “Jesus was phenomenal at that.”

Meanwhile, fellowship and ministry take place in informal home gatherings. Three people gave their lives to Christ at one just the other evening, and a new believer was baptized in a community swimming pool, drawing interest from curious onlookers.

Pastor Joe Slawter also knows that church needs to be done differently in a postmodern setting such as Austin, where many have been turned off by previous experiences and “have already rejected the gospel once.” Eighty-five percent of those living in a three-mile radius of where Slawter has made his home since arriving in Austin last year are unchurched or “dechurched,” he says.

The key is “to overcome their objections in unique ways,” relationally, “and that takes time,” says the former assisting minister at New Life Center (Everett Foursquare Church) in Everett, Wash. He hosted informal home gatherings for several months before recently establishing The Venue in Austin.

Named because “we want to be a place where people can connect with God,” the building was opened by hosting a concert by Austin duo Dawn and Hawkes, who appeared on the TV music show The Voice. The building will mostly be used for community programs and events, with congregational life occurring in smaller settings.

For both Joe and Ezra, the cross-country moves with their families were spurred not only by their concern for Austin’s unreached, but also an awareness of the strategic nature of reaching U.S. cities.

“How else are you going to touch a nation unless you go to the people who are making the decisions?” asks Joe. “If we don’t go to the cities, to be in the middle of the people, who is going to redirect them to Jesus? Are we just going to stand on the outsides and complain about how bad things are?”

Joe also notes that God “is sending the world to us,” in that many immigrants are settling in America’s urban centers. He and Ezra believe it is important Foursquare approach the cities with a missionary mindset, learning the culture and styles of communication.

In keeping with that missions-like approach, they also acknowledge the importance of having “senders,” other churches that support them with prayer, finances and visiting teams.

“It takes a village to raise a child, and it takes a team to impact a city,” says Ezra.

Watch a Video on Austin

This article is Part 4 of a five-part series. Click the links below to read more about Foursquare’s Cities Strategy.