Behind many of the recent disturbing headlines of persecution, violence and disease from around the world is a common thread that presents a pressing challenge and opportunity for Foursquare: the growing number of displaced people.

Whether fleeing sectarian hatred in the Middle East, internal unrest in Eastern Europe or the threat of a deadly virus in West Africa, untold thousands of men, women and children have been forced to leave their homes for an uncertain future.

Some have been offered practical help and a message of hope from Foursquare churches and partners stepping in to try to meet the huge needs. And now Foursquare Disaster Relief (FDR) is appealing for help to provide more emergency funds for these frontline efforts.

In recent weeks, FDR has sent relief funds totaling more than $50,000 to help relief ministry programs in Ukraine, Turkey and Liberia. The crisis ministry’s international operations chief, Chad Isenhart, was in Turkey last month to see how donations were helping Foursquare churches care for some of the thousands who have fled over the border from neighboring Syria. 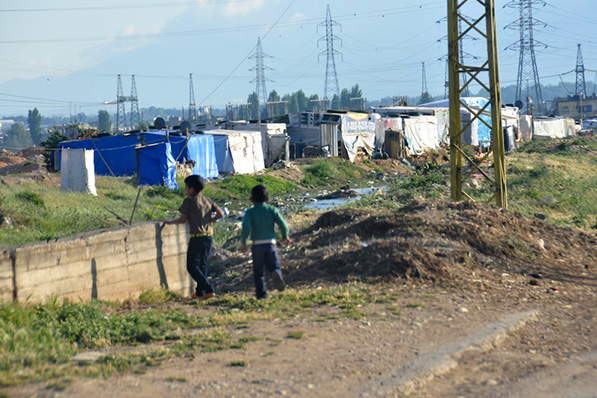 Refugee Camp in the Middle East

He visited families living in cramped rented quarters, struggling to earn money for food and enduring hostility from local residents concerned about the refugee influx. The visiting teams provided water filters and basic supplies, and prayed for those in need.

“I was amazed to see how open they were to prayer,” says Chad. “These were people who had lost everything, forced to leave their homes at the drop of a hat and not knowing if they will ever be able to go back, or if there will be anything to go back to.”

FDR support has also gone to Foursquare leaders in Liberia, Sierra Leone and Guinea following the Ebola outbreak in the region. The money is providing essentials such as bleach and sanitizer to be distributed by volunteers taking hygiene supplies to villages.

“We are praying and trusting God to take the virus away from the land,” stated Foursquare’s national leader in Sierra Leone, Peter Kargbo, in an email update. “People no more shake hands with each other, and there is great fear in the heart of people.”

FDR also provided funds to Foursquare leaders in Ukraine, where the lives of thousands have been disrupted by Russia’s annexation of Crimea. The money is going to be used to help construct the first of what is hoped to be more small, easy-build homes for families forced to leave where they had once lived.

Relief funds have also been sent in recent weeks to Israel, to help those displaced by the latest fighting over Gaza, and Bosnia and Herzegovina, where major flooding left many homeless. Emergency FDR financial gifts so far this year total $336,062.38.

Such situations are of particular concern for two reasons, according to Sam Johnson, Foursquare Missions International‘s area missionary to MENACA (the Middle East, North Africa and Central Asia).

First, many of those affected in places such as Syria and Iraq—who have fled to neighboring Turkey—are fellow believers. “Jesus said that whatever we do for the least of His brothers or sisters, we do as unto Him,” says Sam. “Even the conflict in Gaza affects our brothers and sisters in Christ. At least two of the those killed in Gaza were Arab believers.”

Furthermore, he adds: “Christians should be uniquely qualified to share the love of Jesus to refugees, as doing so is a running motif throughout the Bible—from the children of Israel forced to leave the promised land due to famine and later as forced refugees of war. Even Jesus’ family was forced to leave their home to Egypt due to persecution. We as believers are strangers and sojourners, according to Peter.”

Although crises provide a crucial opportunity to present the gospel through both practical care and speaking of Jesus, it is important to keep the individual needs central, Sam cautions.

“If we only approach this situation from the paradigm of what is ‘strategic,’ we miss the point,” he explains. “People are refugees precisely because they have been dehumanized as warring factions use them as pawns in their own strategic goals. We minister to refugees not because it is strategic to our own agenda, but because they are men and women created in the image of God who need His shalom in all of its ramifications.”

The needs among displaced people far outstrip the current ability of FDR to respond, according to Chad.

“We are grateful for the support we’ve received that has enabled us to offer the help we have,” Chad shares, “but there is so much more that could be done and needs to be done.”

Foursquare churches and members can support FDR’s partnerships in crisis ministry by making undesignated donations that can be released to meet immediate needs as they arise.

Visit FDR’s website to support crucial relief efforts worldwide. There are many donation options, including giving toward helping displaced people.