Passion, prayer and prophetic purpose were the hallmarks of last night’s opening of what many anticipate will prove to be a pivotal Foursquare gathering in Dallas, May 26–29.

Encouraged by dynamic ministry reports from around the country and inspired by a rousing challenge to trust God for the impossible, attendees of Foursquare Connection 2014 at the Sheraton Dallas Hotel and Conference Center were primed for several days of discussion and prayer that are expected to position the movement for a season of unprecedented fruitfulness.

Sobered by the seriousness of this convention week, attendees reconvened at the close of last night’s formal opening session for an extended time of prayer initiated by President Glenn Burris Jr. God has been restoring and reviving Foursquare “not to take us back to where we were,” he stated, but to “to take us forward to where He wants us to go.”

The prayer session opened with a prophetic word brought by Leslie Keegel, national leader of Foursquare in Sri Lanka, who said that God is bringing the church into alignment and unity. As healing and reconciliation come, Leslie stated, there will be a new era of miracles, and Foursquare will be part of a major end-times harvest.

Realigning Foursquare to that end will be much of the focus of the rest of the week as attendees hear the results and recommendations of the five-year Reimagine Foursquare process that has involved leaders in a major review of the movement’s government, leadership and structures.

Also to be unveiled are plans for a renewed focus on ministry in urban centers. Paying tribute to those who have previously served and currently serve in the inner cities, General Supervisor Tammy Dunahoo said that U.S. leaders have sensed that God is “raising up another generation” to come alongside them. She prayed for a dozen young church planters called to the convention platform as representatives of the new urban ministry leaders, some of whom had been featured in a short video detailing recent church planting initiatives in cities such as Atlanta, Austin (Texas), Detroit, Los Angeles, Chicago, New York and Philadelphia.

In the first of this week’s QuickTalk presentations, short messages on important topics, Randy Remington, lead pastor of Beaverton Foursquare Church in Beaverton, Ore., shared how his church has been transformed from a mostly white, “big old loaf of Wonder Bread” congregation to a healthy “multi-grain” one after he realized it was not reaching his diverse community.

The change at Beaverton Foursquare Church involved intentional effort, such as reaching out to other ethnicities through a local school, offering English lessons to immigrants, and extending opportunities for service and leadership to those from varied ethnic groups.

“It’s more than just building bridges,” Randy told the crowd. “We have had to remove barriers that existed within our own church.”

Returning to convention after a widely appreciated visit last year, Samuel Rodriguez left the auditorium on its feet at the end of a rousing closing message. The president of the National Hispanic Christian Leadership Conference and pastor of New Season Christian Worship Center in Sacramento, Calif., challenged his listeners to be the light of the world that Jesus spoke of in Matthew 5:14.

“God always begins by turning the lights on,” he said in a rapid-fire address. “Life requires light. Faith requires light. Why? Because we live in dark times.” Believers should not hide their lights under a bowl, he said. “When we remove the bowl of fear and apathy, God’s love will be made manifest.”

Significant change must come from spiritual, not political, power, Samuel continued. Righteousness must be reconciled with justice, he asserted, closing by urging: “Foursquare, stand up and be light. … Be light and live like Jesus. Be light and change the world.”

The scale of his challenge was set by different numbers presented during the evening. Speaking of urban ministry, Tammy Dunahoo told how 80 percent of the U.S. population can be found in 381 metropolitan areas of the country. Phil Manginelli, one of the church planters featured in the video, shared that 85 percent of the people in the area around his Atlanta church plant are unchurched.

Though there is much important business on the agenda this week, with its “Multiply” theme, Connection 2014 also has an emphasis on personal equipping and encouragement. Foursquare elder statesman Pastor Jack Hayford and bestselling author Francis Chan are among the keynote speakers.

A live vote via text message for the district supervisor attendees would most like to see try to ride the bull was staged to highlight and encourage the use of social media throughout the gathering—Southeast District Supervisor Scott Reece polled highest. Those watching the live stream of the main sessions on Connection Live have been encouraged to offer feedback and comments with #connection14 throughout the week’s proceedings.

Acknowledging that convention started on Memorial Day, the evening session was opened in prayer by Foursquare U.S. Army Chaplain Donald Eubank. “We can’t achieve anything of lasting significance without Your courage, strength and anointing,” he prayed.

Earlier in the day, hundreds attended the new Multiethnic Connection and the returning Conexión Hispana gathering, coordinated by Foursquare’s National Hispanic Council, along with breakout sessions for those involved in Chinese, Indonesian, African (French and English), Native American and Messianic ministries.

This year’s convention has drawn keen interest from the Foursquare family around the world. Three hundred delegates from outside the U.S. are in Dallas, with leaders representing 45 countries, including Cuba, Pakistan and Turkey.

Following the close of the evening session, attendees enjoyed fellowship at the Late Night Connection Center.

Those not in Dallas can watch Connection 2014 sessions online.

Foursquare is "Transformed by Jesus" in Seattle 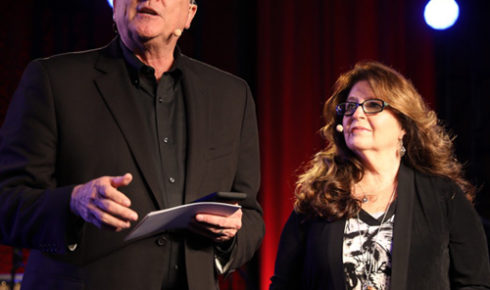