Tens of thousands were without food, water and shelter after category five Tropical Cyclone Pam ripped through the cluster of Vanuatu islands in the South Pacific on March 13, leaving at least 11 dead and many injured. 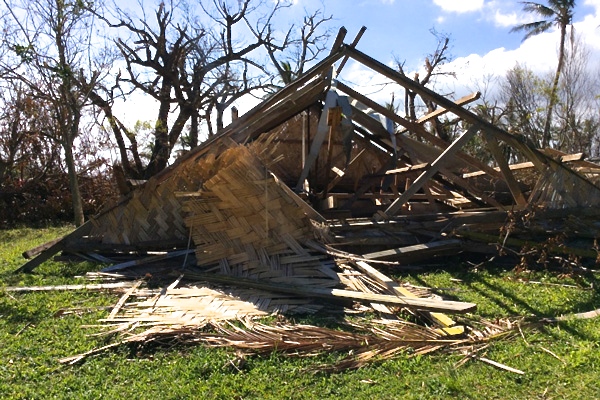 In Vanuatu, a dozen Foursquare churches, including this one, were damaged by Cyclone Pam.

Helping to restore damaged and destroyed Foursquare churches is proving to be a two-pronged response to the needs in the devastated islands. Making sure that their meeting places are usable again is a visible symbol that Foursquare members in Vanuatu are still standing after the storm ravaged the region last month, and also provides a location from which to help others in the local communities affected by the disaster. International relief groups are concerned about long-term food shortages because most of Vanuatu’s crops were ruined.

When the winds came, “people were running all over to try to find places of shelter,” says Jerry Stott, Foursquare Missions International (FMI) area missionary to the South Pacific, who visited Vanuatu soon after the storm and heard reports of gusts clocked at almost 290 mph. “Iron roofing was flying through the air.”

Homes built of block survived the worst of the winds, but many made with tin roofs or coconut and sugar palm thatches were blown away. A dozen Foursquare churches were damaged, several of them completely flattened. In the Port Vila area of Efate, the main church “stood very well through the cyclone, but the second church, just out of town, was totally destroyed,” Jerry reports. Some of the building materials may be salvageable for rebuilding.

Visiting the area with Bruce Banton, Australia Foursquare President and FMI Regional Chair of the South Pacific, and Chad Isenhart, international operations chief for Foursquare Disaster Relief (FDR), Jerry says that ensuring the churches could meet again was a high priority. The three visiting leaders delivered 200 water filters and two chainsaws for clearing away debris and to help build shelters, and also presented emergency relief funds to assist in the recovery. 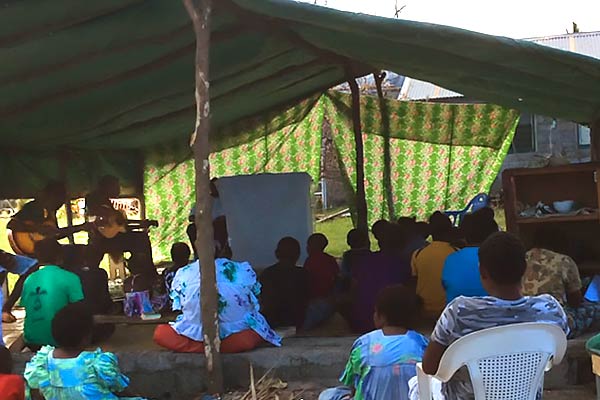 Church congregations continue to meet, even after their buildings were destroyed.

Chad praises the resilience of the Foursquare members impacted by the cyclone. Some congregations have been meeting in the open air, without electricity.

“One church we saw was flattened to the ground, but the Sunday right after the storm, they used a tarp and some poles, and erected a covering from the sun so that people could come and worship still,” Chad recalls. “So the church in Vanuatu isn’t letting this stop them from gathering and worshiping together. Vanuatu people are very resilient, and they are working to fix things so that they can get back to life as normal.”

Jerry notes: “It’s vitally important for the churches to continue to meet on a regular basis for continual encouragement to one another and spiritual growth.” On the island of Tanna, he adds, Foursquare members have been helping others with food and some supplies.

Luke Franklin, a Foursquare missionary to Vanuatu from Papua New Guinea, thanks Foursquare members in other parts of the world who prayed for the islands when news of the advancing storm broke. Though the area was “totally devastated,” he says, with churches, homes and fields destroyed, no Foursquare members had been harmed. “Thank you for your prayers that covered us,” he says. 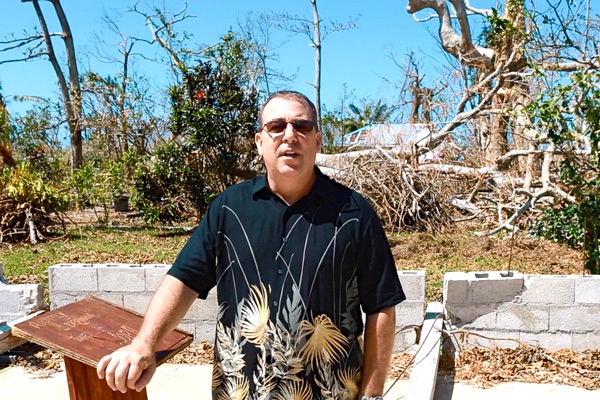 For many years, Vanuatu was perhaps best known as being the home of “cargo cults,” dating back to World War II, when islanders thought that misdirected American military supply airdrops that landed near them came from the gods.

Foursquare’s presence in Vanuatu dates back to 2002, since when Jerry has made eight visits to the islands. Many members of one of the largest cult groups came to Christ when Jerry was invited to speak to them at a special gathering in August 2007.

Following his latest visit in the wake of the cyclone, Jerry appeals for Foursquare members around the world to “pray for strength, restoration and for the Holy Spirit to move in the midst of the destruction. I believe the Vanuatu Foursquare Church will come through this and be even stronger than ever before.”