With the death toll surpassing 650 and thousands injured and displaced, Foursquare churches responding in the aftermath of Ecuador’s devastating April 16 earthquake have appealed for prayer and support.

While national leaders seek to develop a coordinated response, some Foursquare congregations closest to the epicenter of the 7.8 Richter scale temblor have already begun taking urgently needed supplies to parts of the worst affected areas. Foursquare churches across the country have been donating food, water, clothes and medicines.

The biggest earthquake in the South American country in three decades, it virtually flattened some communities in the provinces of Manabí and Esmeraldas, along the country’s northern coast.

No casualties have been reported among The Foursquare Church’s membership, though one pastor in Manta and his family are homeless, as the building in which they lived above the church was left unsafe following the earthquake. Members of the church have since been meeting on open land, where they plan to construct a new building.

Meanwhile, another Foursquare congregation, in Jaramijo Beach, is also meeting outdoors, as the recently built walls to its new building collapsed.

Some Foursquare members’ homes may have been damaged, but full details of the extent of the earthquake’s destruction have yet to be learned, says Paul Otremba, Foursquare’s area missionary to Central and South America.

There are around 51,000 Foursquare members in Ecuador, across almost 250 churches and meeting places. Last year, nationally, the church recorded 12,000 decisions for Christ.

Welcoming support for the relief and recovery effort in a letter to Foursquare churches around the world, Foursquare’s Ecuadorian national leadership stated that aid will be given to church members as well as others in need who are not Christians “as we believe this is the time to proclaim the name of Jesus Christ with the message of hope and faith.” The affected provinces are without “power, food, commercial activity, and no work or any jobs,” and nonperishable foods are needed “because they are unable to cook and do not have water.”

Water and clothes collected at La Alborada (The Dawn), a Foursquare church in Guayaquil, were taken to victims in surrounding communities. Reports of the distribution at the church’s Facebook page note “a lot of spiritual need” with people needing “comfort, a hug and a message of encouragement in the midst of so much suffering.”

A clinical psychologist, a nurse and a rescue worker—all Foursquare members—are among responders who have been taking part in the relief efforts, reports Jorge Valarezo Reyes, national board secretary of Foursquare in Ecuador. Recipients of Foursquare help have received it “with gratefulness, with tears,” he says. 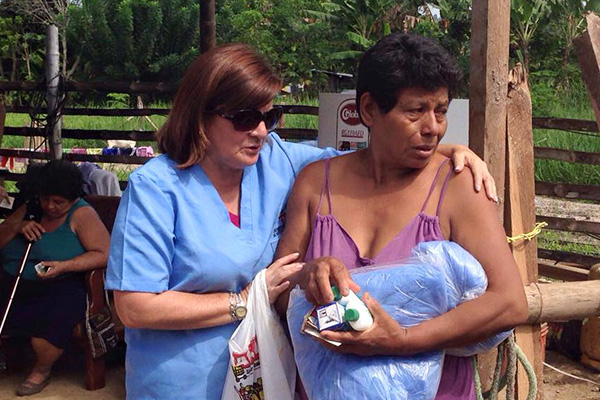 One Foursquare pastor, who is also a psychologist, has organized a team to go to earthquake areas to offer counseling and support, says Paul, who felt faint tremors from the major earthquake at his home in Bogota, in neighboring Colombia. Physical needs remain significant, he adds, with many people living outdoors because of the destruction and the fear of further aftershocks. “The climate is very hot, and so people are really suffering,” he adds.

Security concerns have also arisen, with reports of looting and attempts to rob people delivering supplies to the affected areas. “You need to be very careful,” Paul warns, “because there are, according to the news from Ecuador, robbers on the street, and they will stop you and steal what you have.”

Foursquare Disaster Relief (FDR) has been following the situation in Ecuador closely. FDR International Operations Chief Chad Isenhart says the ministry plans to send funds to help with the early relief efforts and work with Ecuadorian national leaders to determine the best way it can offer longer-term assistance.

“We want to be strategic,” Chad affirms. Though FDR often helps with emergency needs in disaster situations, with a number of government and international nongovernmental organizations already in action in Ecuador, “it might be better for us to focus on spiritual and emotional care,” says Chad, and rebuilding efforts after the initial crisis has passed. “We are still trying to determine the needs, and what is our best contribution.”

Meanwhile, in Ecuador, Foursquare leaders are bracing themselves for the long term. “The situation is difficult for all the inhabitants of these places, and with time it will worsen,” says Jorge, pointing to a lack of water and electricity, and poor roads.

In addition, there is a shortage of food and scarcity of work, resulting in rising costs of basic essentials, and ongoing health concerns. “This is why we consider that the help that the non-affected areas and the whole Foursquare family have to give will be for at least a period of three months,” he adds.

Beyond the immediate need for relief supplies to give to those in need, one pressing concern is rebuilding work on the Foursquare churches damaged. “It is necessary to begin immediate construction and reconstruction of these churches in order for the congregations to have a place to meet,” Foursquare leaders in Ecuador noted.