This month, as news of ISIS beheading more Christians breaks around the world, The Foursquare Church in Turkey has chosen to be a force for peace, love and God’s healing amid brokenness. 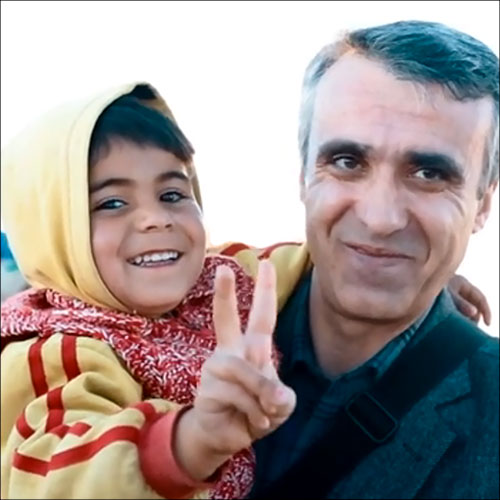 Foursquare Pastor Huseyin Ocek from Turkey holds Marina, who lost her hearing and ability to speak after attacks.

In the past seven months, residents of Northern Iraq and Syria have fled their homes and their nations to escape ISIS violence and civil war. Women have been kidnapped, children burned. Men have been murdered, others taken captive, report refugees.

Now, survivors find themselves displaced. Many have sought refuge in neighboring nations, including Turkey, where The Foursquare Church is the largest evangelical Christian denomination in the country. There, Foursquare National Leader Ihsan Ozbek and pastors of local Foursquare churches are caring for thousands of refugees.

Ihsan reports that in the province of Sirnak, initially 8,000 refugees had taken shelter in a camp in what is “the most poor area in our country.” Foursquare churches have partnered to provide tents for shelter. They have donated food, too, and are determined to “show our Lord’s mercy toward them” and “show His love and grace,” Ihsan says.

Elsewhere, in the city of Adana, Foursquare Pastor Huseyin Ocek of Adana Kurtulus Foursquare Church visits Syrian refugee camps to pray for healing for displaced people experiencing both physical pain and emotional devastation. There is an urgency for medical attention, he says, for children with burns on their hands and faces, and for nutrition for those staying in the camps.

What is being done seems very small, Pastor Huseyin notes, compared to the vast needs of the people. This is perhaps best illustrated in Marina, a young child who lost her hearing and her ability to speak during ISIS attacks.

While in desperate need of food, supplies and medical attention, camp residents are actively experiencing God’s love through The Foursquare Church in Turkey. “Because of our relationship,” Ihsan says, “now we see some new-born Christians. … They have hope.”

The Foursquare Church is also a global family. While local leaders have served well, bringing food, prayer and supplies to refugees, they are not doing this alone. Foursquare Disaster Relief (FDR) has partnered to help with food and supplies.

“Turkey is a Muslim country, but an open country to the gospel,” shares Chad Isenhart, international operations chief of Foursquare Disaster Relief. “We have an opportunity to reach out to these refugees—who are in a foreign land where they do not speak the language, have difficulty finding work and face many obstacles—with the message of hope, peace and acceptance.”

Foursquare churches in the United States also are invited to partner with FDR through prayer and donating funds to help Middle East refugees.

“Partnership between U.S. Foursquare churches and FDR is so critical right now,” says Chad, who recently returned from Turkey, where he consulted local pastors and government leaders with disaster relief best practices. As a result of this partnership, the mayor of one village that houses refugees now wants to donate a building that can be made into a church for believers.

“Because we came in and worked through the mayor to help provide relief and supplies,” explains Chad, “we have open doors into these areas like never before. The time is now to continue to help.”

Be part of caring for those who have no hope for the future. Equip Foursquare leaders in Turkey with funds they need to deliver supplies, food, medical attention and culturally sensitive ministry to displaced people groups. Donate to FDR, and invite fellow church members to help by giving funds, as well.

Together, Foursquare churches worldwide can help equip those who are sent, during this difficult time, and take part as God moves in people at refugee camps and brings hope and healing to the Middle East.