As world health experts warn of a potential explosion of Ebola cases in Africa, Foursquare members at the heart of the crisis are offering hope to some of those most at risk—with buckets of supplies and a lot of prayer.

“Ebola is a deadly virus, but God is using it to impart His kingdom,” said Samuel Morris, Foursquare’s national leader in Liberia—the epicenter of the deadly outbreak—in a recent email report.

Nurses who belong to some of Foursquare’s eight Liberian churches, along with other volunteer members, have been taking simple health kits to local communities to offer practical help and spiritual encouragement.

Scores of sealed buckets containing bleach and other cleaning materials have been distributed to families in the capital, Monrovia, and surrounding areas. Recipients have been instructed how to follow strict personal hygiene measures to help reduce the likelihood of the infection spreading. 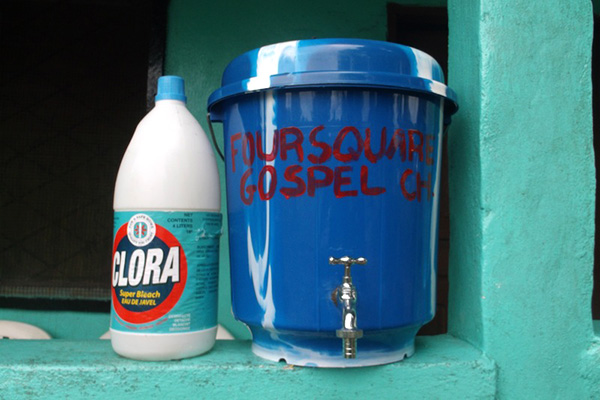 FDR-funded health kits help to prevent the spread of the deadly Ebola virus.

Provided for $25 each by a gift from Foursquare Disaster Relief (FDR), the kits also give Foursquare members an opportunity to share the gospel and pray for those who are worried. Members of the distribution teams are putting themselves at risk, “but this is a real crisis, and as a church they feel they can help,” says Daniel Lucero, Foursquare Missions International’s (FMI) area missionary to West and Central Africa, and the Francophone world.

“This is a work of love to their fellow Liberians,” Daniel adds. “The people are afraid; they are desperate and troubled. That is why the church serving in this way is such a strong testimony of hope.”

Since the outreach in Liberia—where Foursquare has about 1,000 members—began a few weeks ago, more than 300 people have made decisions for Christ as a result of the visiting teams, Daniel reports. “They gather in homes to provide and explain Ebola education and supplies, and then share the gospel,” he adds.

Because there have been periodic shutdowns of schools and government agencies, to keep people from gathering and spreading the virus, “everyone is in their homes,” Daniel explains. “Not just women and children, but entire households have been studying and hearing the Word together, especially men.”

In addition to health care materials, the teams have been handing out gospel tracts. Some of the new believers have wanted to be baptized, but follow-up efforts have been hampered by a national curfew that has restricted movement. 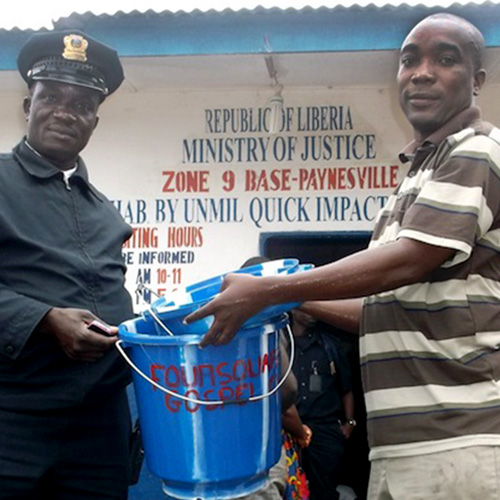 Foursquare leaders have opportunities to share the gospel as they deliver practical aid.

In his update from Liberia, Samuel Morris reported how God had given the church there “an open door to minister the gospel to the extent that we are being invited to places we wouldn’t dare to go before.” New converts and others returning to faith were turning up at Foursquare churches each week, such that in two places there was a shortage of seats, he added.

Some FDR funds have also gone to neighboring Sierra Leone and Guinea, where Ebola cases have also been recorded. Foursquare has 19 churches in Sierra Leone, with around 1,500 members, and nine churches and meeting places in Guinea that comprise some 1,200 members.

Latest news of the Foursquare ministry in the face of Ebola came as the World Health Organization warned that up to 10,000 new Ebola cases a week could be seen within two months in West Africa, where the death rate in the current outbreak has reached 70 percent.

FDR International Operations Chief Chad Isenhart applauds the Liberian volunteers for their efforts, appealing for further financial support so that more funds can be given to the outreach. Recent Ebola cases in the United States have brought home the reality of the virus’ threat, and could spur churches and individuals to want to support Foursquare family members in the worst affected areas of the world, he says.

“There is a real need and opportunity in West Africa right now,” Chad implores. “My hope is that people here will hear and respond.”

Liberia’s Foursquare volunteers want to continue to help, “but they need material support,” affirms Daniel. He also urges prayer: “This is a real crisis. We need to pray for human wisdom, for the health agencies and workers who are battling the crisis, and also for the church, and for divine intervention. Pray that faith and love will cast our fear and hopelessness.”