Jim will retire Aug. 31 brimming with confidence about the future of The Foursquare Church, saying the movement has been through a transformation since he joined in the late 1970s.

“Growth and maturity have happened,” says Jim, 66, who served as FMI director from 2010-2016 before switching roles with longtime missionary Ted Vail, then associate director.

“Under Ted’s leadership, we have strengthened the way we serve missions, think about missions, allocate resources, develop leaders and make decisions,” states Jim. “We are also serving multicultural ministry in very intentional ways.”

Jim will depart with the admiration of Foursquare President Glenn Burris Jr., a friend and colleague for 25-plus years. Glenn calls Jim a man of integrity and character, with the ability to assess situations better than most.

“His trustworthiness is off the charts,” says Glenn, who also retires at the end of this month. “The one personal value that is one of his highest attributes is his view of authority. He has been a leader in authority and under authority. But he views it as a steward, not an owner. Because of that, I’m convinced God continues to trust him with more. He’s never been afraid to step out or step in. But he’s also quick to step back. He makes decisions always with the best interests of others in mind.”

His FMI successor offers similar plaudits. Ted calls Jim a humble leader willing to lead from the front of the room or the back—even willing to spend all night on the phone with a national leader or make a three-day plane trip for the sake of a face-to-face meeting with that person.

“Jim contributes to all who are around him from any seat: those he leads, his peers and other leaders,” affirms Ted, who has learned to live humbly and be open to counsel by observing Jim. “With him, you get the personal upgrade. Jim lives out loud. He laughs big and cries with you.”

Jim will remain active at his home Foursquare church in Lake Elsinore, Calif. He has already told Pacific Southwest District Supervisor Fernando Castillo he is available to serve. Jim is also likely to consult with churches wanting to form more missional communities. Such prospects are one reason Ted says his predecessor isn’t retiring, but just changing seats, as he concludes his current role.

“We fully intend on Jim and Melinda staying active and involved globally as elders and ministers,” Ted asserts. “Their contributions are far too valuable to take a pass on.”

After that, he served as district supervisor in Southern California and the Northeast, assistant general supervisor, and Foursquare vice president before taking the reins at FMI. He has also been an adjunct professor at Life Pacific University (LPU), and a member of the board of directors and the Foursquare cabinet.

“Some people cannot be replaced; Jim Scott is such a man,” adds Randy Remington, who also begins his term as president on Sept. 1. “If you have had the privilege of being in a meeting or church service when Jim prays or leads a devotion, it is always accompanied by tears as well as boundless hope and vision. There is not a more devoted, kingdom-focused, humble-hearted servant anywhere. We cannot replace a Jim Scott.”

In recent years, Jim has longed for increased personal interaction. That’s one reason he has done more one-on-one encouraging, equipping and advising of other national leaders and pastors lately.

“We fully intend on Jim and Melinda staying active and involved globally as elders and ministers. Their contributions are far too valuable to take a pass on.”
—Ted Vail, director of FMI

“In Norwalk and Orange, we were able to dedicate babies and then watch them grow up,” Jim says of the joys of pastoral ministry. “We shared the congregation’s successes and heartaches, and let them share ours. To watch a businessman who didn’t know Christ come to Christ, and today is a chaplain for businesses, is unbelievably rewarding.”

The same is true of former students at LPU or young people who attended Camp Cedar Crest and later shared how a talk on serving Jesus or a message on missions changed their lives.

For now, though, he hopes to relax for a while and reflect on the positive strides he sees Foursquare making to adapt to life in the 21st century.

“We have confirmed as a family that we are willing to risk and change for the sake of the mission,” Jim says. “This ensures that in the future The Foursquare Church will bear much good fruit.” 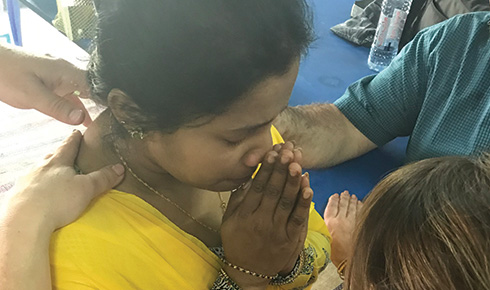