A longtime professor, author and award-winning educator, Doretha O’Quinn credits her many achievements to a key decision to pursue Foursquare credentials. 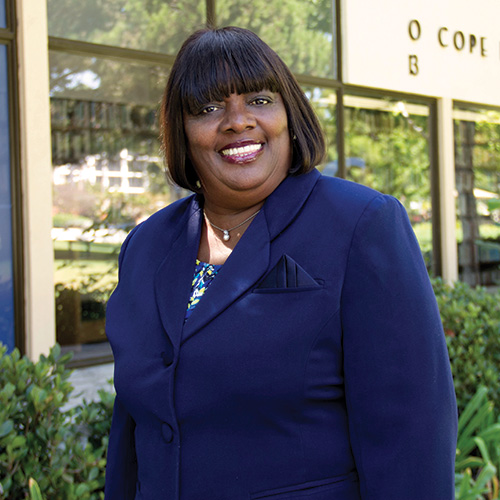 She took that step while majoring in theology at Life Pacific College (LPC, then called Life Bible College), prior to spending a year on the mission field in Panama. Not only does Foursquare represent her faith community and the people joining her on life’s journey—Doretha’s ordination credential confers legitimacy on her leadership.

“I’m honored by it,” says Doretha, provost and vice president of academic affairs at Southern California’s Vanguard University. “It affords me many opportunities to speak in [non-Foursquare] churches. Foursquare training is recognized as legitimate.”

She and Michael, her husband of 41 years, are assisting ministers at The Rock (Anaheim Foursquare Church) in Anaheim, Calif. Her entry into Foursquare life came as a teenager when she attended a Foursquare Crusaders youth retreat. Afterward, she wound up at West Adams Foursquare Church in Los Angeles. With Pastors Marvin and Juanita Smith as her spiritual mentors, she became a leader in Crusaders. At 18, she received a divine call to prepare for ministry.

“I didn’t even know what that was,” recalls Doretha, now a mother of four and grandmother of eight. “I just wanted to teach.”

Despite thinking of enrolling in a teachers college, Doretha followed God’s direction to LPC. There she got involved in ministry groups, worked in the ministry office, and started her development in Christian education under the tutelage of Dorothy Jean Furlong, a longtime faculty member well-known for her expertise in Christian education, who in her storied career also served as academic dean.

After returning to the States from Panama, Doretha took several post-graduate courses to obtain a teaching certificate. She taught initially at a Christian elementary school before taking three years off, during which time she gave birth to her two oldest children.

During the break, the elementary school extended an invitation to become its principal. When she returned to work, Doretha also pursued a master’s degree in education and administration.

This new role proved crucial to her career. While she was a principal, LPC asked her to teach two courses, which led to an opportunity to serve as an adjunct professor at Biola University. Eventually, she decided to obtain her doctorate in intercultural education, studying how students from different cultures learn.

Doretha has taught leadership courses to educators, government officials and business leaders worldwide. Her audiences have included parliament officials from four African nations, and leaders and expatriates in six countries on that continent. She also has mentored a pastor in Martinique, and has spoken at a women’s conference in South Africa.

Her doctoral studies paralleled a transition from secondary to higher education. After teaching at several universities, last year Vanguard hired her as its chief academic officer.

Doretha’s faith is integral to functioning in what is a highly visible and often pressure-packed position.

“I look at everything through the lens of my faith,” she says. “That is true whether it’s having peace in the midst of turmoil, confidence, or knowing my work is an assignment from the Lord.”

Her many achievements include being named “Outstanding African-American Educator of the Year” by Phi Delta Kappa, and writing or contributing to two books, including Silent Voices, Powerful Messages: The Historical Influence and Contribution of the African-American Experience in the Foursquare Gospel Movement (published by The Foursquare Church).

“The church should take the lead in showing the world how to live in diversity, instead of the world showing us.”

—Doretha O’Quinn, assisting minister at The Rock in Anaheim, Calif.

While at an age when many contemplate retirement, Doretha continues to press ahead in the cause for racial reconciliation. She longs to see the vision of Revelation 12 (every tribe, nation and tongue joining together) come to pass.

“At the end of the day, I think we’re going to be surprised at what we see in the kingdom of God,” Doretha says. “The church should take the lead in showing the world how to live in diversity, instead of the world showing us.”

Again, this is where Foursquare has played a central role in her life. Years ago, Foursquare Missions International Director Jim Scott and his wife, Melinda, were instrumental in working with students of different ethnicities when such a move was controversial.

“Their love and desire to engage people in difficult conversations was powerful,” says Doretha, who after those talks would later serve a term on Foursquare’s board of directors and as a trustee. “I truly appreciate them.”