My father and his brother were exploring the streets of Los Angeles in the 1920s, discovering what their new hometown had to offer. They came upon what appeared to be a movie theater with its gleaming marquee, and they decided to go inside.

They soon realized the building was Angelus Temple, the grandest church they had ever seen, with a dynamic lady evangelist preaching from its stage. Aimee Semple McPherson, under the anointing of the Holy Spirit, preached a sermon that night that convicted the two young men, and they were saved.

Not long after, my father attended L.I.F.E. Bible College (now called Life Pacific College) and was prepared to serve the Lord in foreign missions. He met my mother, a beautiful country girl from Oregon who had been saved in a revival in her hometown and was responding to a vision of God for missionary service.

Sister McPherson married my parents during a Sunday evening service at Angelus Temple. She preached an illustrated sermon that night on Isaac and Rebekah, and when the time came in the drama for the biblical couple to be wed, Sister McPherson led my parents in their personal vows of marriage.

My mother and father were deployed to South Africa to serve indigenous people, including Xhosa (pronounced ‘Kōsa) and Zulu tribes. Mother was pregnant with me when she boarded a ship in New York Harbor bound for Cape Town, South Africa. Just outside New York City, her water broke, and she began to pray for a miracle. She didn’t want her baby born while on the ship, and God saw fit to keep me safe and sound for the duration of the journey.

Once they were safely ashore in Cape Town, in summer 1929 I emerged into the world. Mother and baby were both fine, and I was born as a South African, in the nation I consider home and among the people I love just like family.

When I was 2, our family boarded a train in Cape Town headed for a village called Butterworth in the Eastern Province. Our train arrived, and as we disembarked, a German man approached us with many questions. My parents talked with the man and soon realized he was the reason God had led us to Butterworth.

God had given the man a specific vision about the missionary He was sending to help establish the work in one of the villages. That missionary was my father, and the man recognized him immediately when he got off the train. He took us to the village of Willowvale in the Transkei region, and my parents knew it would be our home. The surrounding countryside dotted with thatch huts and indigenous people was exactly as my mother had seen it in the vision God had given her years before.

Mother began to pray for the land on a hillside that was perfect for a missions station, but the owner wasn’t interested in selling. In faith, she continued to pray until one day he relented and sold us the property.

I gave my heart to the Lord at Willowvale when I was 10, and began to grow in my own faith and calling before the Lord. In 1947, when I was 18, Howard Courtney traveled to South Africa; he was the first Foursquare official to visit the Transkei region. When he met my sisters and me, he asked if we would be interested in attending L.I.F.E. We told him we would love to attend, and when he returned to Los Angeles, he made the necessary arrangements for the three of us to travel to Los Angeles and attend L.I.F.E.

My sister Imogene graduated and returned to Willowvale to assist my parents in ministry. My other sister, Darlene, met Foursquare Missionary Jack Anderson and later married him, traveling with him to the Foursquare missions station in Bolivia, where they raised their family in service of the Lord.

Just as my father before me, I graduated from L.I.F.E. and began a life of ministry. I spent a few months with my former roommate in Colorado learning the ways of American wheat farmers and praying for God’s direction in my future. Like my father, I met a beautiful country girl from Oregon, and in 1952 we married, exchanging our vows on the same platform where my parents had been married years before.

For a short time, Arlene and I pastored in the U.S. to help establish our family and ministry. Then, in 1954, just as my parents did, we traveled to South Africa and spent the next 35 years sharing the gospel throughout the Transkei region.

Mother died a few months after Arlene and I arrived in Willowvale. Dad continued to serve as a missionary without her for a couple years before he officially retired and passed the ministry torch to us. I became the Foursquare supervisor of Southern Africa and labored there to establish churches among the Xhosa throughout the hillsides of South Africa. We had house churches as far away as 150 miles from our home in Willowvale.

One of the realities of the Transkei region is the scarcity of jobs for young men and older boys. There is no industry, and so most young men travel far from home to cities where they work, and send money home to support their families. 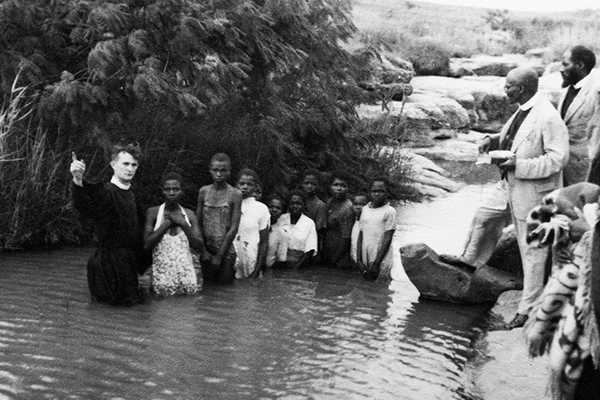 A young man from Willowvale went to work in Durbin some 200 miles north. While there, he met with some other black Christians in the city and told them about his “white missionaries” in Willowvale. They inquired about us traveling to Durbin to help them establish a church, and we went. This was how the Foursquare ministry grew in South Africa in those days. We responded to the need whenever the testimony of our converts brought others into the fold.

Arlene and I retired to her native home in Oregon, and she was welcomed into the arms of Jesus in heaven a few years ago. I am 86 now, and fondly recall the hand of God on our lives and ministry. I am grateful for God’s provision in times of personal need and His deliverance in times of distress.

Most of all, I am thankful for the faithfulness of the Lord from the days when my father walked into Angelus Temple, and for the seeds of faith that were planted throughout our family and The Foursquare Church as a result.