I’m Brett Swayn, and I’m the worship leader at Hope Center (Nashville II Foursquare Church) in Nashville, Tenn., pastored by Stephen and Sandra Flanigan. I also oversee The Cookery, a fully functioning café and catering center providing homeless men with hope and healing, where they can learn professional culinary skills and also acquire life skills within a Bible-based program. But it was a long journey to where I am today. 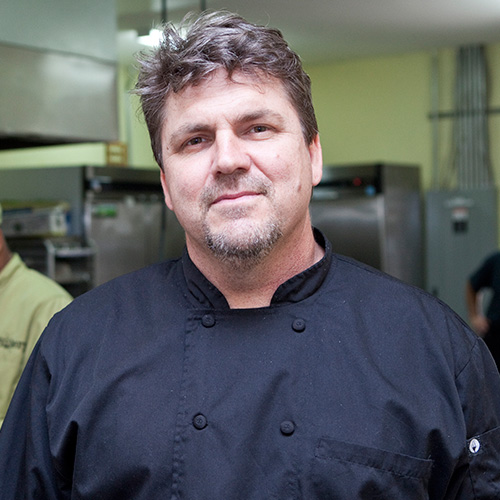 I grew up in the suburbs of Perth, a city in Western Australia. Jesus wasn’t on my radar until about age 5, when a visiting Sunday school tent event came to my apartment complex. I was greeted with an image of a bloodied man on a cross, and a lady speaking of how my sins placed him there. I left in a hurry. It wasn’t until I was about 34 that I understood the meaning of that.

I was a musician. I worked hard. Music became the source of identity. It’s why I came to America. It’s why I got married. In 2001, however, my world shattered.

Through my anger, frustration and unfaithfulness, I had lost my marriage, my family, my little girl, my dreams, everything. I could have gone even further into the death of sin, but Jesus was calling me.

One morning, I awoke with a urging to find a Bible. I found one, opened it, and read. God started doing something in my heart. But I thought there was no way He would answer me. I far as I saw myself, I was filth.

In 2002, after having experienced a personal spiritual conversion with Jesus, I took a bus from Dallas to Nashville. I arrived on unction from the experience, but was penniless and soon discovered homelessness.

My gaze had always been downward toward the poor: “Those poor folks; how terrible for them.” But over time, I smelled like them, went where they went, ate what they ate and dressed like they dressed. And my gaze came upright. Eye to eye. I had learned compassion.

About four months into being homeless, I came to an inner revelation. I said to God, sincerely from my heart, “If You want me to live here for the rest of my life, I’m good with it.” I meant it.

A few weeks later, after months on my own, living at a rescue mission and on the streets, I was offered an entry-level position at Flemings Steakhouse after an employee doing community service discovered me volunteering at the mission. I took the job and eventually moved up to the position of sous chef. I was no longer homeless—but my heart ached for those still on the streets.

In 2008, Terry Kemper met me at a church service. As a young lady, she had found herself in a tragic period of homelessness herself. Because of the similar roads we had traveled, we connected and shared the dream to help the least and lost, and provide them with hope, love and a means to restore their lives.

In 2009 Terry and I, with some friends, created The Upper Room, which began by feeding and giving shelter to six homeless men in a church gymnasium. When the floods hit Nashville in May 2010, the program burst open, and today welcomes as many as 90 homeless individuals twice a week.

At The Upper Room, people receive a hot meal and a safe place to sleep. More than that, however, they experience a loving community that cares about them, helps them and prays with them.

Out of the experiences at The Upper Room, Lambscroft Ministries was born. This movement has established two discipleship houses occupied by formerly homeless men who pay a modest monthly rent, and seek spiritual enrichment and community.

We had long been talking about an idea to take our learned skills and offer a place of learning and restoring hope that eventually became The Cookery. In 2009, Terry found a building that, as she described, “looked like a bomb hit it.” The renovation took three years to complete. Through all of this, God taught us perseverance, resilience, patience and trust.

Amidst the hardships of bringing The Cookery to life, Terry had her own personal fight—she was diagnosed with pancreatic cancer. Through hospital stays and countless treatments, she never lost sight of the dream of The Cookery and what it could mean to others.

On July 8, 2013, The Cookery opened its doors with a staff of two formerly homeless men in the kitchen with me, and Terry working both the back and front. Our dream began to take shape. On March 2, 2014, Terry lost her battle with cancer and went to her eternal home. On March 11, two men became the first graduates from The Cookery culinary training program.

Many church groups from various denominations are involved with our ministry. Simply put, we are composed of people who believe that Jesus is among the poor, brokenhearted, rejected, unloved, hopeless and houseless. Everyone involved wants to extend the love of Jesus to the least and the lowest among us, regardless of background. St. Francis of Assisi said it best: “We have been called … to bring home those who have lost their way.”

ShareTweetEmail
Brett Swayn is the worship leader at Hope Center in Nashville, Tenn. He also oversees The Cookery, a cafe that provides culinary arts training for homeless men.
Advertisement