At a time when the cultural divide between church and community is getting wider and deeper, a small Foursquare congregation in Utah continues to offer a quiet lesson in how to build bridges and help make a difference. 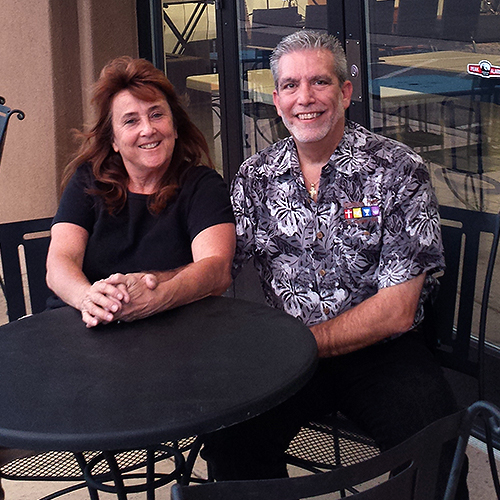 Founded 10 years ago, Solomon’s Porch Foursquare Fellowship (St. George Central Foursquare Church) has woven itself into the fabric of its community in St. George, Utah, which has a higher percentage Latter-Day Saints (LDS) population than Salt Lake City, the state capital. The way they have impacted St. George demonstrates very well Foursquare’s missional objective of church and community transformation.

“We have chosen not to debate people into the kingdom,” says Jimi Kestin, who started Solomon’s Porch with his wife, Rickine, in their living room. “We believe the only way we can shine Jesus to this community is by living a Spirit-filled life in front of all people and loving them unconditionally, where they are at. As they see Jesus through us, the opportunities come up to have them seek to know about our faith.”

One of the main expressions of that philosophy has been their Sunday Feast, which feeds up to 100 people experiencing homelessness and others with a low income, after the morning service. Growing out of the congregation’s own weekly potluck time of fellowship, the feeding program is now supported and largely run by money and volunteers from other parts of the community, including an annual grant from the LDS Humanitarian Services.

Pastor Rickine and her volunteers prepare and serve a restaurant-quality meal—“not just soup-kitchen fare, though there’s nothing wrong with that,” says Jimi—while Solomon’s Porch members fellowship with those who join for the feast.

The weekly Friday food pantry, which provides around 75 individuals and families with supplemental food supplies, has similarly earned financial and practical support from the local community. And when Solomon’s Porch needed to move to a new home in July, community members and various faith groups rallied to fund the facility, to help ensure both food programs continue—another symbol of the Foursquare group having been widely embraced.

“Only when people know how much you care will they consider listening to how much you know,” says Jimi, who along with Rickine was on staff at Grapevine Fellowship (Las Vegas 2 Foursquare Church) in Las Vegas before moving to Utah.

Jimi and Rickine lead Solomon’s Porch as bi-vocational pastors, and their open-handed approach means they minister to many in the community beyond their own congregation of 60 or so.

“We are about building the kingdom, not the church,” explains Jimi, “so we are not concerned where somebody spends their Sunday morning. We are more concerned about where they spend their eternity.”

“We believe the only way we can shine Jesus to this community is by living a Spirit-filled life in front of all people and loving them unconditionally, where they are at.”

Striving to be winsome and welcoming does not mean having to compromise, however. As current president of the St. George Interfaith Council—which includes LDS, Jewish and Buddhist representatives in addition to Roman Catholic and Protestant denominations—Jimi has learned it is possible to be unified on issues of common concern without having to let go of personal convictions.

The annual New Year’s Day prayer gathering, “Prayer Over the City,” that he helped establish—where government leaders and participants of 17 faith groups unite to pray in the manner they are most comfortable with—reflects his belief that “the God we serve is big enough, and His shoulders are broad enough, and His gospel is faithful enough, that it won’t be corrupted by standing next to somebody who doesn’t know Him or understand Him in the same way I do.”

Well known for his trademark Hawaiian-shirt style at the pulpit that also speaks of the church’s informal and easygoing nature, Jimi says it is important to give the Holy Spirit room to convict people of sin and the need for change, rather than trying to do the job for Him.

Churches should also “not rate sin, and stop excluding people whose sin is different than ours,” he observes. “God is more than capable of reaching someone with what He wants to change in their lives, if I don’t run them out of church first.

“We have to believe in our own doctrine and theology enough that we can let anybody in the doors of our church and not feel threatened by their presence,” he continues. “Last time I checked, Jesus spent His time around people who didn’t understand Him, and He made the word of God come alive without compromising.”

In addition to a grace-filled welcome, Solomon’s Porch also offers visitors a hint about its heart through the name. Mentioned three times in Scripture, it was the place in the Temple where Jesus declared Himself to be God, and which became a meeting place for the early church, characterized by unity, signs and wonders, and openness to people from all backgrounds.