With creativity and generosity, Foursquare leaders and members from local churches across the country came together this past holiday season to bless missionary families around the world with practical expressions of support and care. 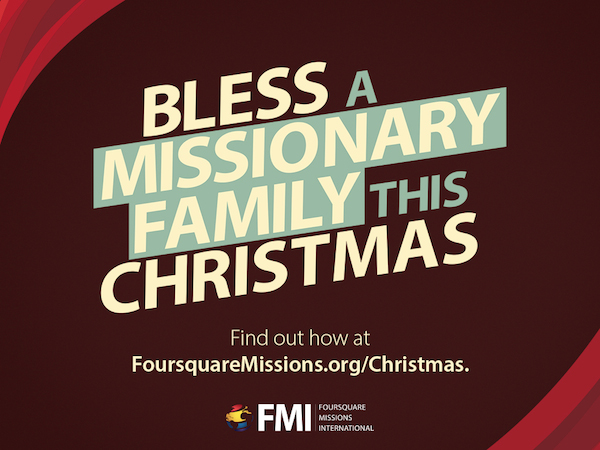 Thanks to Foursquare church participation, missionaries worldwide felt cared for this past Christmas.

The Foursquare family heartily responded, and as of Jan. 13, FMI received a total of $28,836.27, with 100 percent of the offering divided equally among all FMI missionary families. Each family received $192 in the first disbursement on Dec. 23.

Many pastors and leaders reported how participating in the campaign actually blessed them and the people in their churches. They said the project made it easy for them to get involved, and that when they realized how much missionaries give up for the sake of the gospel, they wanted to do what they could to return the blessing. For some, remembering times away from family during Christmas struck a chord and added a personal motivation to their participation.

Missions Coordinator Michelle Carriker from World Hope Worship Center (Salisbury Foursquare Church) in Salisbury, N.C., says her church started small. They selected three missionaries from the FMI website whom they could bless with Christmas cards and small gifts. “We were able to become extended family for our missionaries on the field,” Michelle says.

Bob Bankhead, World Hope’s senior pastor, adds that the campaign was such a success that their congregation has adopted it into the culture of how the congregation celebrates Christmas each year.

In Southern California, Taylor Pike heard about the FMI Christmas campaign at her church, The Rock (Anaheim Foursquare Church), pastored by Jerry and Kimberly Dirmann. Taylor decided to get involved and encouraged a small group of youth called Freedom Builders to join her. The group averages between 20 and 25 young people, all of whom were excited to reach out to FMI missionaries.

“We broke into groups,” Taylor explains, “and made short video greetings wishing FMI missionary families a merry Christmas, and thanking them for their service.” The young people emailed each missionary, telling them that a video was posted on social media. “Each missionary family responded with much gratitude and mentioned how blessed they were by our videos,” Taylor says.

Many people at New Hope (Fairmont Foursquare Church), in Fairmont, W.V., have family members serving in the military. Emmy Heywood, who serves as the church’s missions director and is a Foursquare license candidate, reminded the congregation, pastored by Roger and Heather Thrower, that our FMI missionaries are “soldiers on the front lines,” and that they need our personal love, encouragement, and support in finances and prayer.

The church received an offering, and Emmy downloaded coloring sheets for kids in the church from the campaign’s website that they sent to FMI families along with Christmas cards from the congregation’s adults. She says it was a great way to get people personally involved. Many people in the church are now connected to FMI missionaries on Facebook, she says, and are excited to support them and to know more about their ministries.

Robert and Alice White, senior pastors of Lewiston Foursquare Church in Lewiston, Idaho, remember what it was like to be ministering in a new place and away from family at Christmas. When they first arrived at the church, Alice says, Foursquare people reached out to them, and she wanted to return the blessing to FMI missionaries who must feel the same way she and Robert did.

Ladies from the Lewiston congregation raised money by wrapping Christmas presents at a local mall and sent the proceeds along with their church’s offering to FMI. They believe the offering will allow missionary families to feel a tangible touch from the States and to bless their families by doing something fun together or with a gift that they might not otherwise be able to purchase.

It’s not too late to participate to bless a missionary family. Additional donations are still coming in, and the final disbursement to FMI missionaries will be made when the offering concludes at the end of February.

Read about how FMI missionaries responded to this caring touch from home during the 2014 “Bless a Missionary Family This Christmas” campaign.