Our graduating class was the next-to-the-last of those students who were personally ordained for ministry by Sister McPherson. I will always remember that moment on the Angelus Temple platform when she laid hands on each of us and spoke prophetically over our lives. All but two went down under the power of God as she prayed.

I was first drawn to the college because of the music conservatory, where I hoped to be trained as a Christian bandleader by Jimmy Boersma, the legendary director of Angelus Temple’s Silver Band. I switched my focus from music to pastoral training, but still played my trombone and baritone every time an opportunity presented itself.

During my years at L.I.F.E., I played in the Silver Band, in ensembles, and as a soloist in Angelus Temple. I formed The Royal Guard, a male quartet made up of fellow students who traveled and sang in area churches as well as in Angelus Temple. 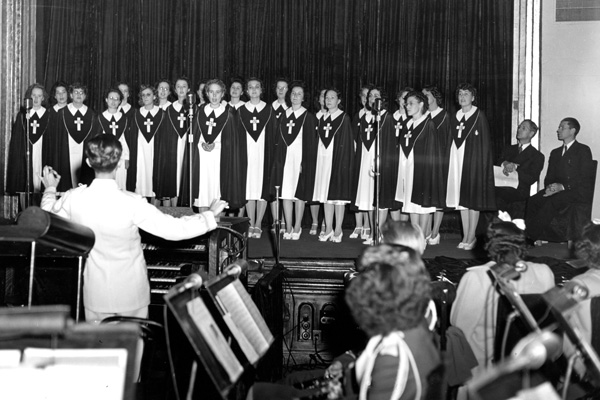 During one of our appearances in the temple, one of our singers got a little too close to the baptismal tank that was recessed into the floor just behind a red velvet curtain. Imagine our surprise, and his, when he stepped back and promptly fell in. When we determined that he was not injured, everyone in the audience and on the platform had a riotous laugh. Even Sister McPherson thought it was a funny sight.

The day after graduation, The Royal Guard headed east for New York on a ministry tour. The brand-new car we drove had no air conditioning, and the summer heat in the Southwest could be intense. But that didn’t matter. We loaded the trunk with suitcases, a trombone, a guitar and a trumpet, and filled the car with some very inexperienced but enthusiastic ministers ready to take the gospel to the world.

Another recent graduate, who was slightly older than the rest, joined us for the trip; he would be the “preacher” of the group, with his single sermon that we all got to hear multiple times that summer. Wherever we stopped to minister, The Royal Guard would complement his message with Gospel music and lead the congregational singing. Two young men in our group were accomplished pianists, so we always had the music angle covered. It was a great summer. I like to say, “What we lacked in lightning, we made up for in thunder.”

Starting out with only $25, we left Los Angeles with plans to stop at churches in Arizona, Arkansas, Illinois, Kansas and New York. Our assignment was to minister to people wherever we could, and to encourage young people seeking God’s direction to consider attending L.I.F.E.

We also hoped that some of the adults would be inspired to help support the ministry of the college in prayer and donations. We never asked for support for our group, but churches helped as they could. Some churches provided us with meals, and others helped out with a place to sleep or even a small offering to keep us on the road.

The entire time of my education and early years of ministry, the United States was still experiencing the lingering effects of the Great Depression, and then World War II. It was an incredibly sad period of history for our nation, but throughout the decade or so of tumult, God brought spiritual revival to the people and churches of America.

I owe a great debt to L.I.F.E., the jewel of Sister McPherson’s ministry. My inspiration for Gospel music and for pastoral ministry started while I was in college in Los Angeles.

In the years following my graduation, I had the privilege to build five churches, one at the invitation of the U.S. Army in Germany. I was a civilian missionary at that time, and the Army chaplain’s office called and asked if I would serve under the auspices of the Army to establish this congregation in a very rough region. It was a challenging assignment, and I gained an entirely new respect for church planters and what they go through to establish a new ministry.

Whether in Germany or at home in the U.S., I make it a point to answer God’s call, and I have enjoyed every minute of serving my country and my Savior—whether playing my trombone, building a church or preaching the gospel.

This article is adapted from a video interview with James Boulware, recorded on Oct. 13, 2004.

ShareTweetEmail
James Boulware is a L.I.F.E. Bible College graduate and church planter whose ministry was impacted by his encounters with Aimee Semple McPherson.
Advertisement